Are you ready to visit one last place with me? 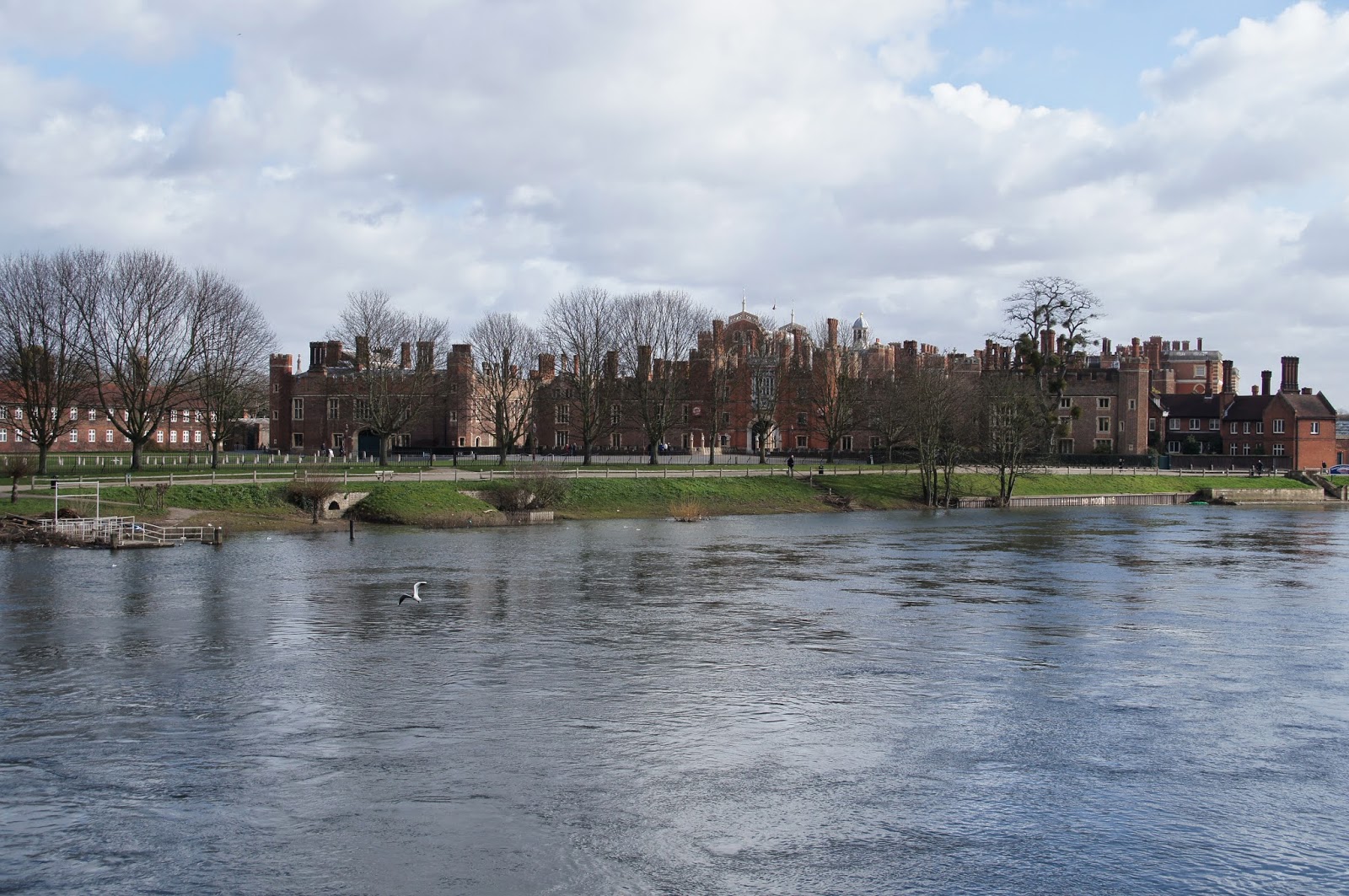 With one day left until we flew back home, we thought that Hampton Court would be a good place to spend our last day.  Both Miss M and I have visited before, back in 2006, and I couldn't have been happier when she suggested we return.

You can get here, just like King Henry VIII did back in Tudor times, via the River Thames but it is a 3 hour journey so we opted for the train which leaves Waterloo Station and gets in to Hampton Court Station 30 minutes later.  It is just a short walk across the river to Hampton Court

Walking through the main gates towards the ticket office we saw a side gate with this beautiful gold design.  It is not part of the tourist experience but it was just so lovely, I had to have a photo. 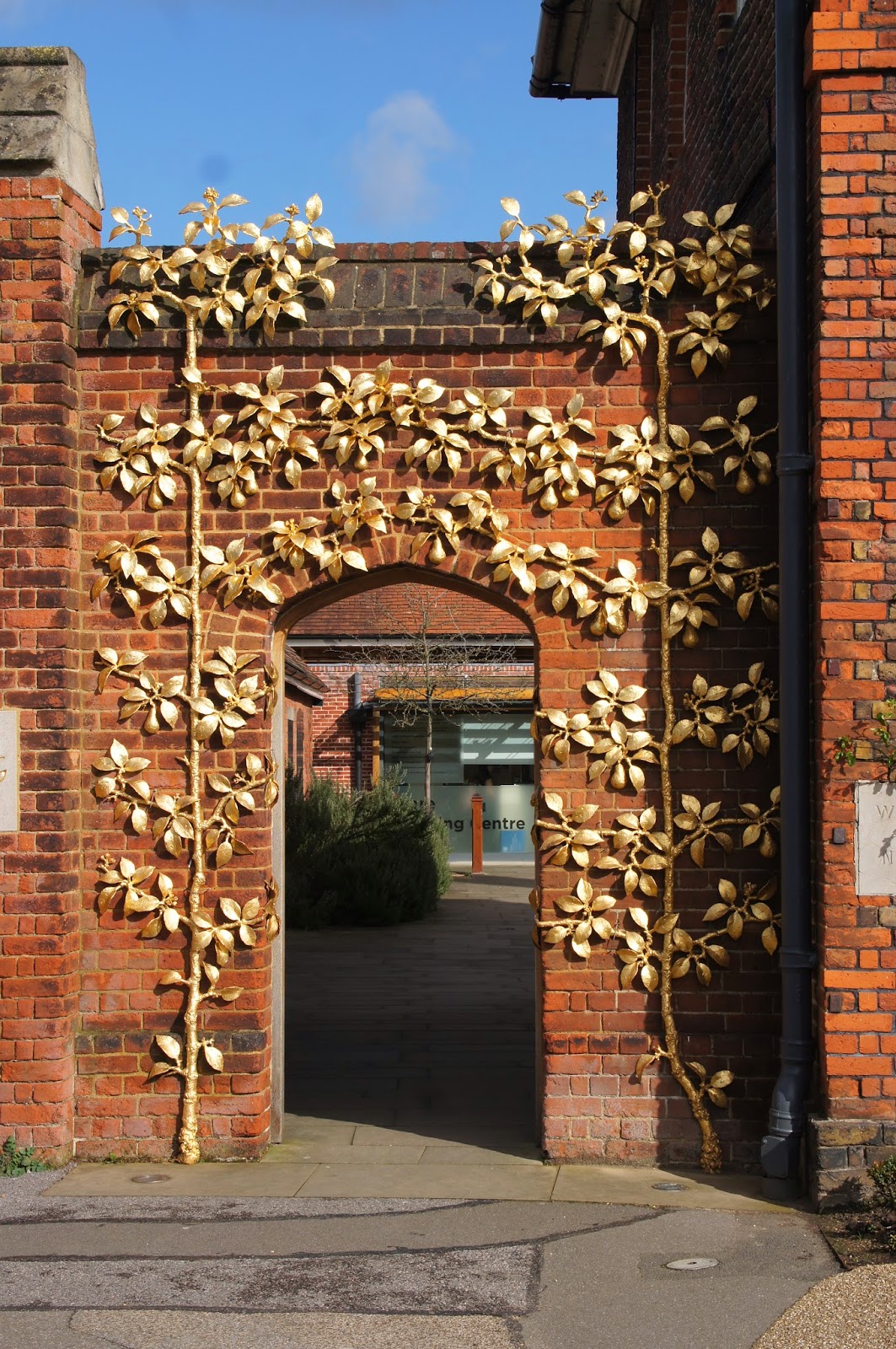 Making our way to the courtyard we viewed the map and decided to head for the Tudor Kitchens.  I just love the kitchens.....they fed up to 600 people, twice a day.  Everything is set up as if the inhabitants had just stepped outside for a second.  In the meat kitchen, slabs of meat are being prepared for cooking......not real meat (I think it is wax) but it all looks soooooo real. In the next kitchen, we found a vat of "wax" meat stew and pie cases ready to be filled (Did you know....the pastry was not eaten?).  The picture below is of the Great Kitchen where up to 6 beasts were spit roasted at the same time. You can see the spit levels in the fire place.  At the time there was a huge fire in the hearth so you could feel exactly how it would feel for the person who had to stand there all day turning the spits. Phew! it was hot, even on a cold day in February. 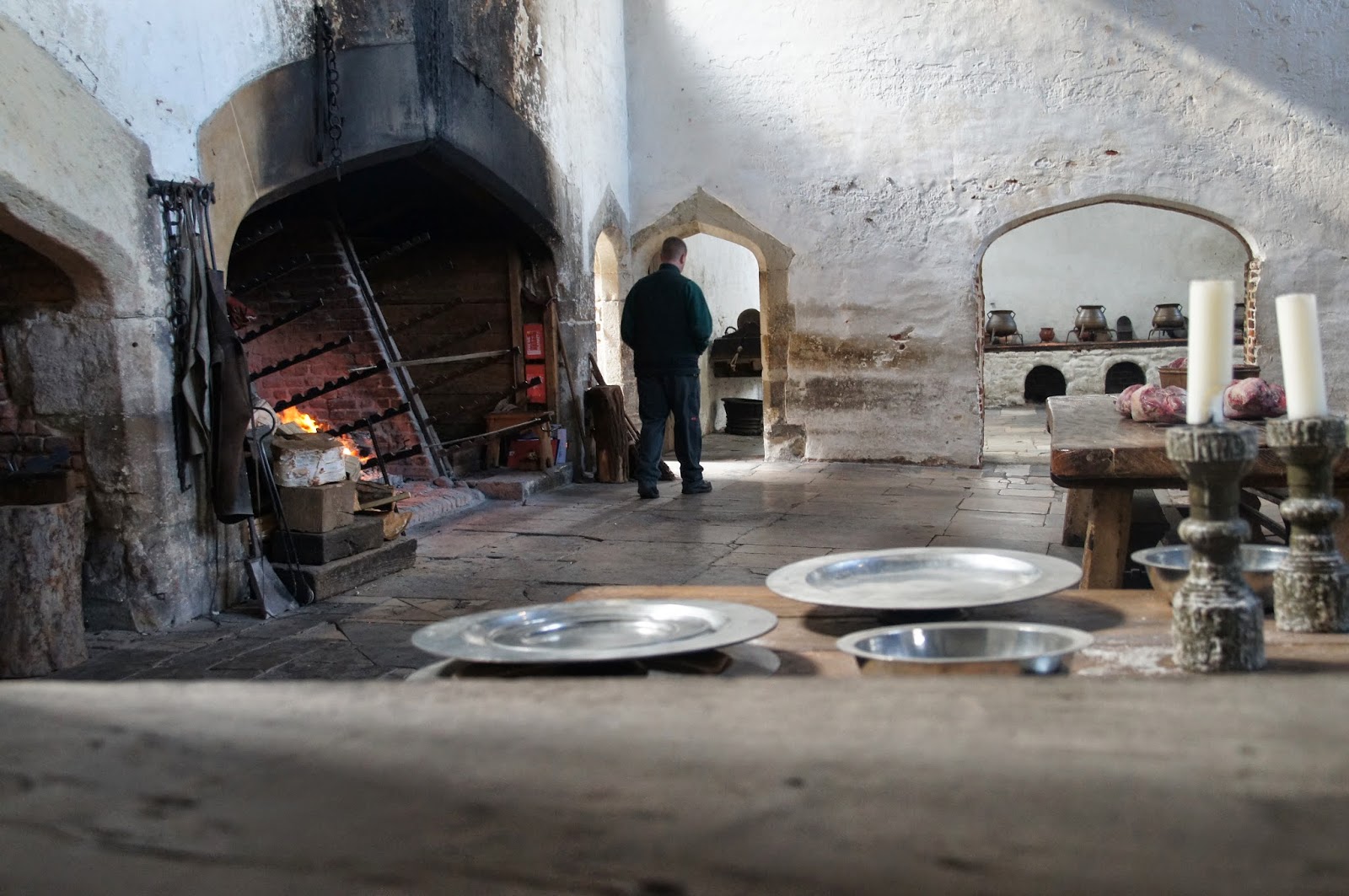 After finishing off this part of the guided tour in the wine cellar we made our way back to the courtyard to start off on our next tour. 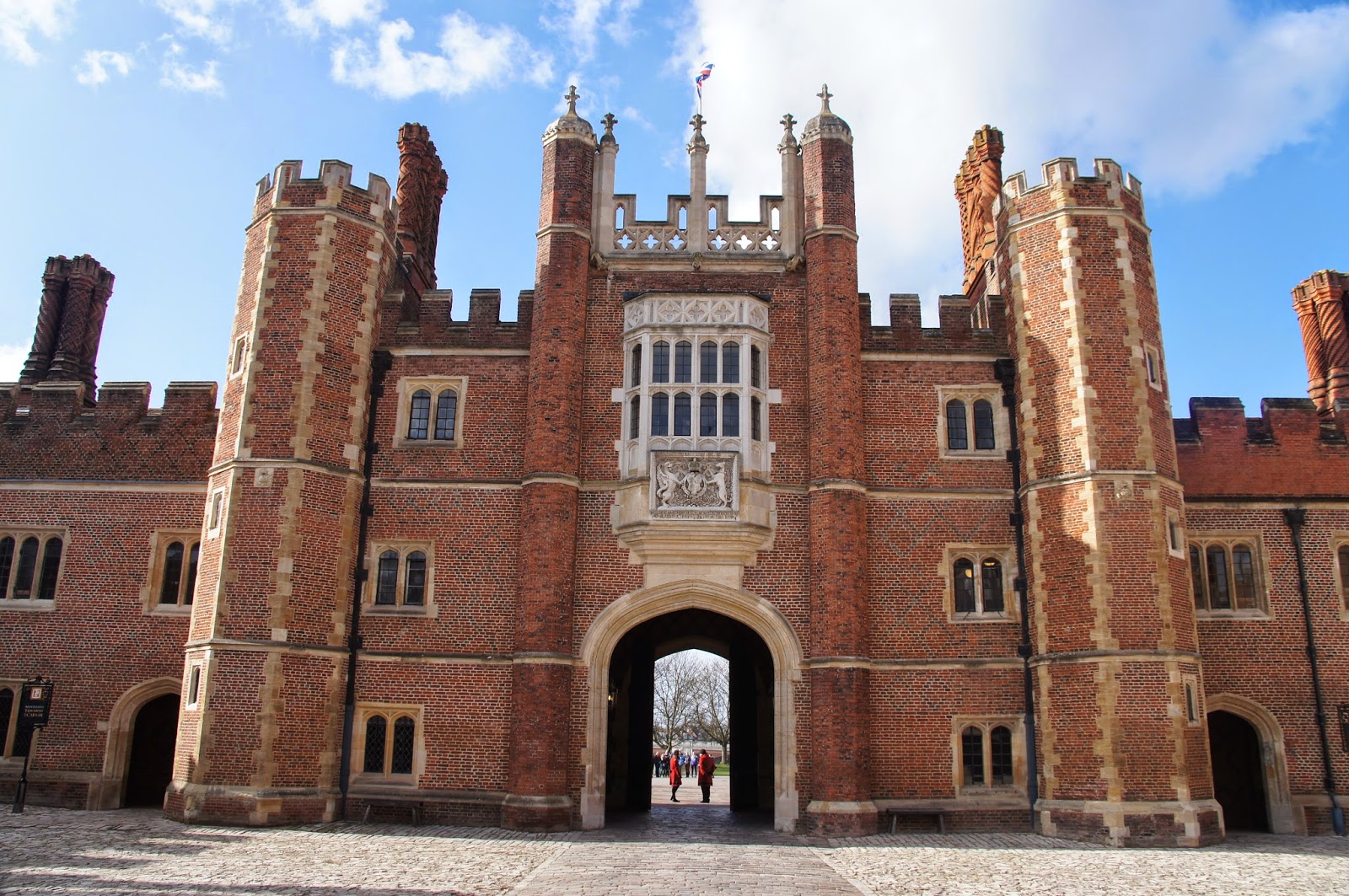 The next part of the tour was "Young King Henry VIII's story" which mostly covered his life while married to Catherine of Aragon and his relationship with Thomas Wolsey.  I enjoyed this thoroughly and was intrigued by the graffiti to be found in areas like window sills and fireplaces (where a softer stone is used). The graffiti are from Henry's time and are now historical relics and need protecting by perspex shields. We were told they were carved into the stone while people waited for an audience with the king....or Wolsey.  It was around this time that I realised I did not have much battery in my camera so, just for once, I did not take excessive photo's. 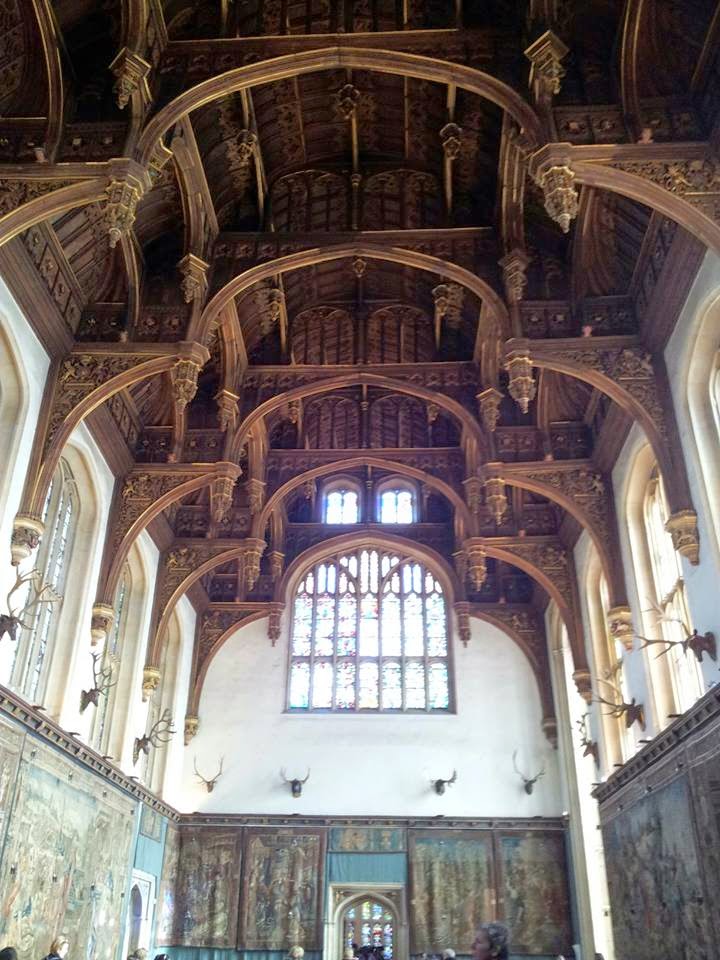 From here we made our way through other chambers while listening to stories on the audio guide.  At one point I leaned up against a window to listen to an explanation of a painting in the hallway between the Great Watching Room and the Council Chamber when it struck me that there was a pattern gouged into the window sill.  I wondered who had done this, while tracing the pattern with my finger, and had they done so while they were waiting for an audience with King Henry.  Looking at how deep it had been gouged, they had obviously had to wait quite a while.We will probably never know and for all I know it was a bored school child who did it the week before! The best bit was walking through the Royal Chapel where Henry married Anne Boleyn.  No photography was allowed here but you can link here to see the beautiful ceiling in this chapel.  Also on display was a replica of Henry's crown.

After lunch we decided to skip the Baroque part of the palace and instead head to the formal gardens, known as the Privy Gardens,  but to get there we had to walk through a more informal garden.  Of course the daffodils and crocuses were prolific here as well. 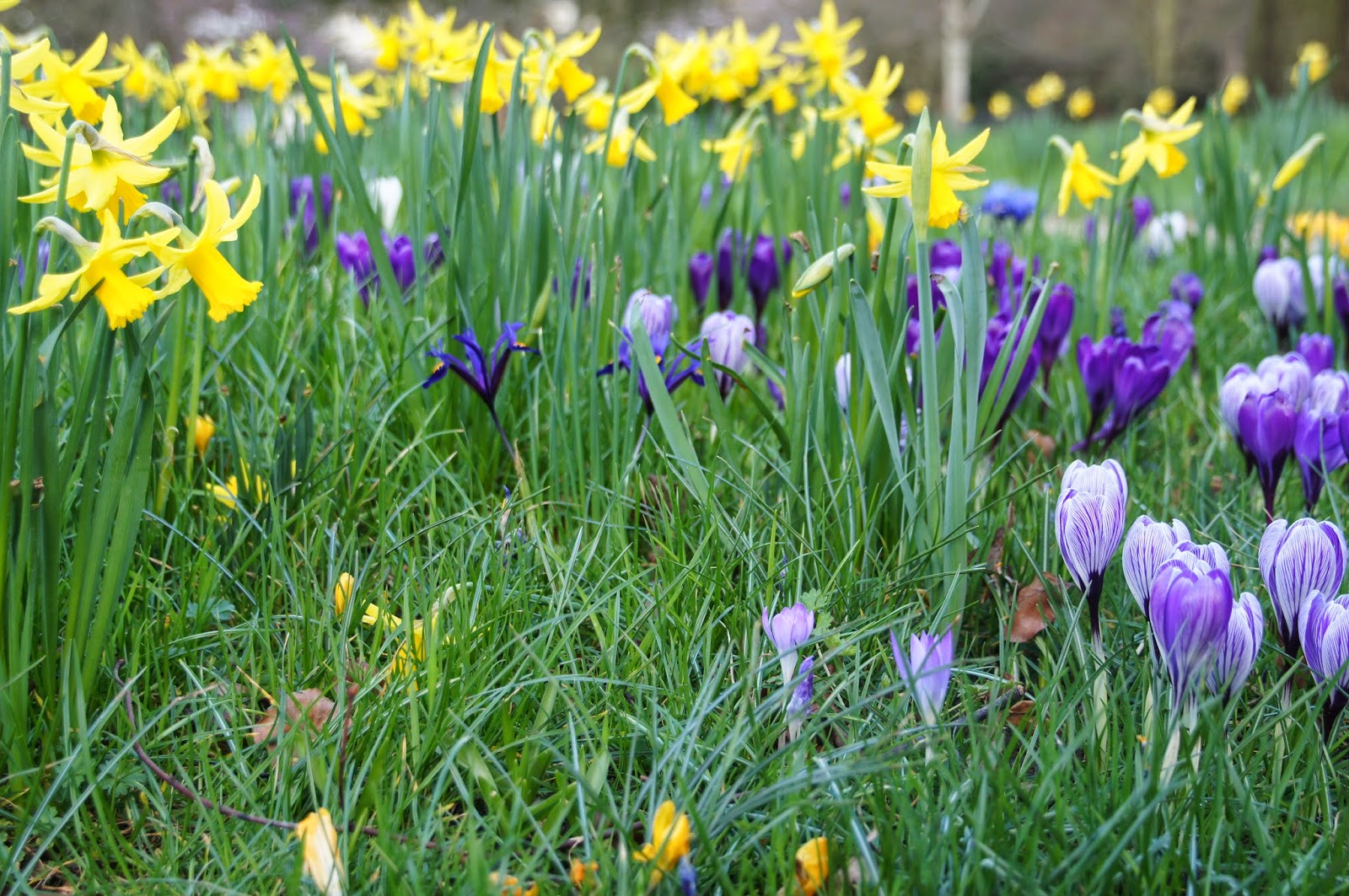 Even at this time of year the Privy Garden is stunning.  Everything is so beautifully manicured. I could walk around all these gardens day in, day out, every day. 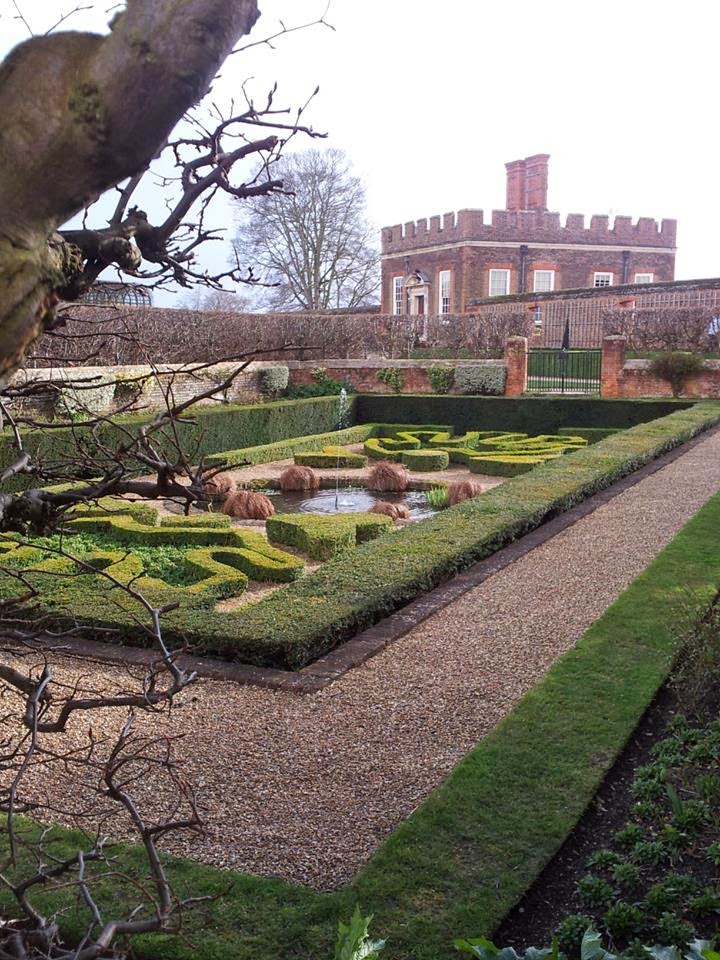 Looking back at the main building, it is evident how luxurious it was in it's hey-day by the number of chimneys.  All the visitors chambers had fireplaces and back then it would have cost a kings ransom to have them all lit. 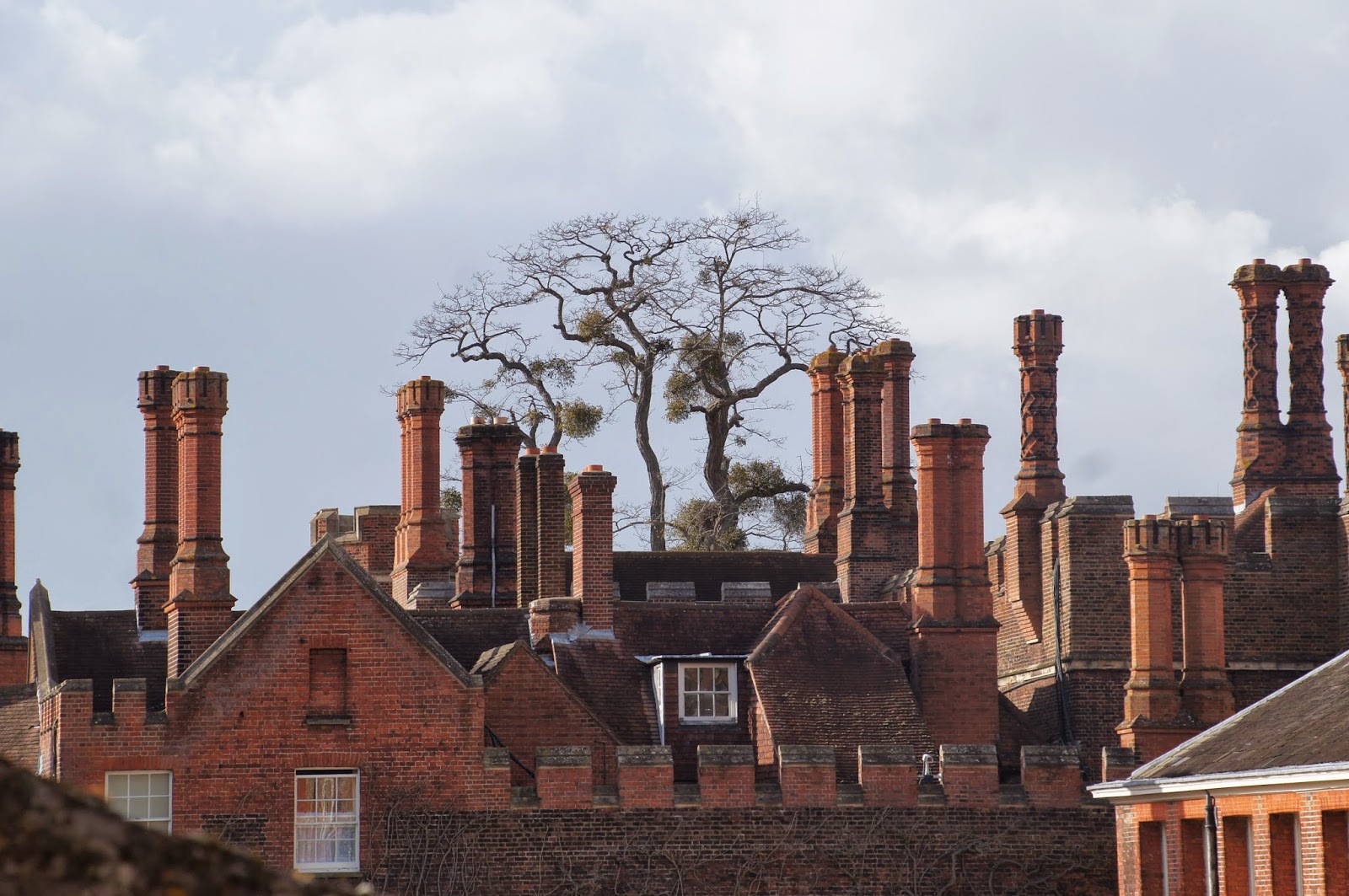 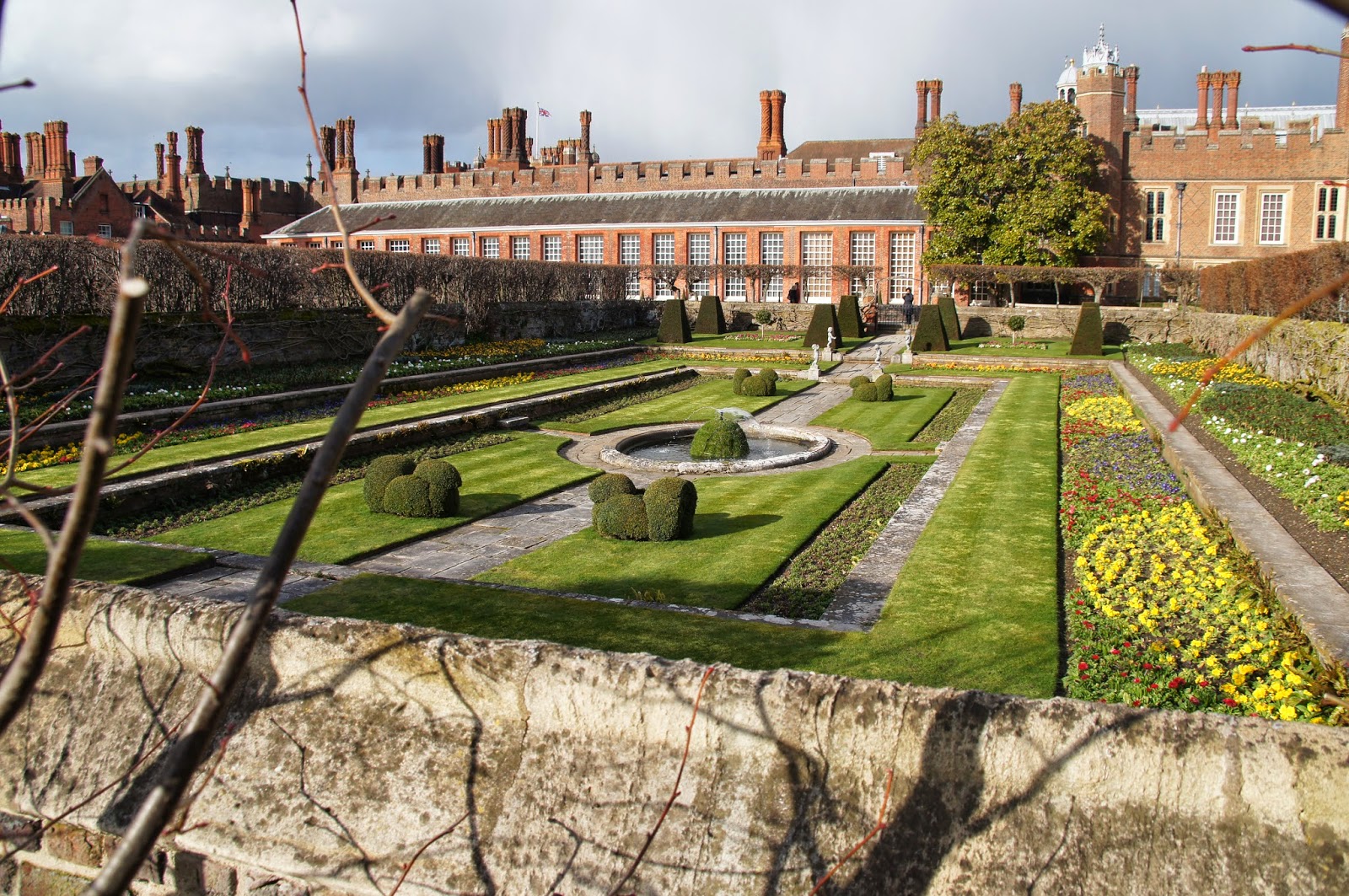 It was a fabulous day out and there is so much to see and do here but the days are still quite short in February so we decided to make our way back to London.

The next day was going to be a long one as we had to pack and head to the airport for a 10pm flight.  A flight that lasts over 20 Hours. We did spend the day in and around London at the Natural History Museum and the V&A before taking the Tube to Heathrow.  Now I am back home and this trip seems such a long time ago already.  I want to thank all the readers who joined me on this journey and left such wonderful comments.  I am glad you enjoyed it all.