I am back today to recap my trip. We spent a week in Essex with my mum and her partner, Norman, doing some much needed laundry, shopping and going to the movies or just relaxing and spending quality time at their house. During the week we were joined by my brother and my  three nephews for lunch to celebrate mum's 80th birthday.  Miss M and I returned to London for 4 more days of adventure before heading back to Australia.

Miss M wanted to visit Cantebury. I had been there the time before but I had been unwell so I was happy to rediscover this lovely little town. The first step was to find where the trains departed from. There are a great many railway stations in central London and they all head to different parts of the country. I consulted the internet which said you could get to Cantebury from two different stations but Miss M wanted to be double sure so after breakfast we consulted the information desk at our local Euston Station. They sent us to St Pancras, only a short distance away. What we did not know at the time was that the speed train leaves from St Pancras and it costs a bomb! I felt we were given a bum steer and Charing Cross would have been a better option but time was marching on.

We reached Cantebury and first off, I wanted to visit the Norman Castle which was on the opposite side of town. I had checked on the internet and learnt that the castle is open all year round so you can imagine how cranky I felt when we got there only to find the gate locked and a sign up that said the castle was CLOSED. This was going to be one of those times when a photo from the perimeter wall was going to have to do. 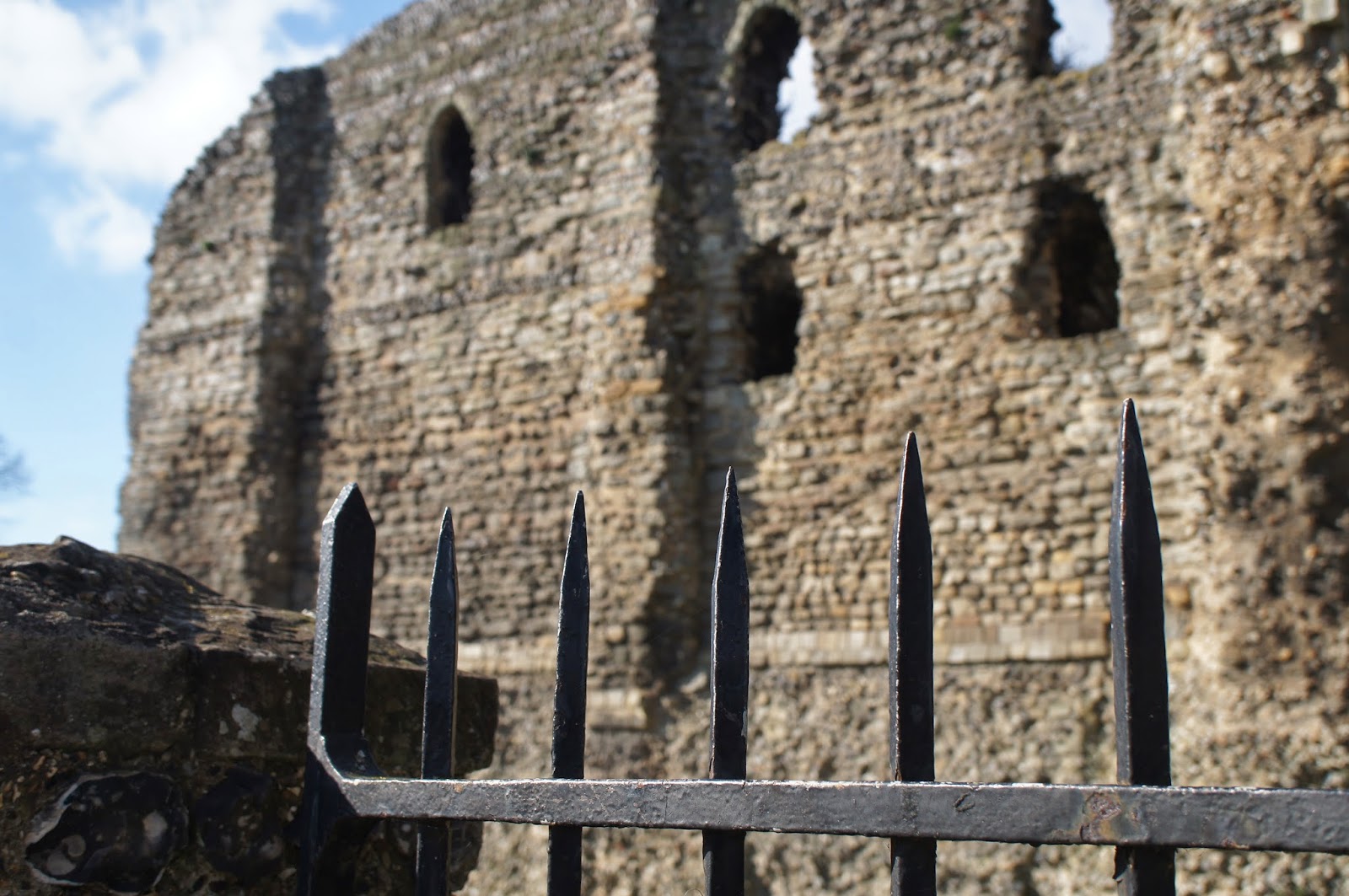 We walked the whole way around the structure to take some photos and Miss M tried to console me by stating the obvious.....there probably wasn't much inside anyway. 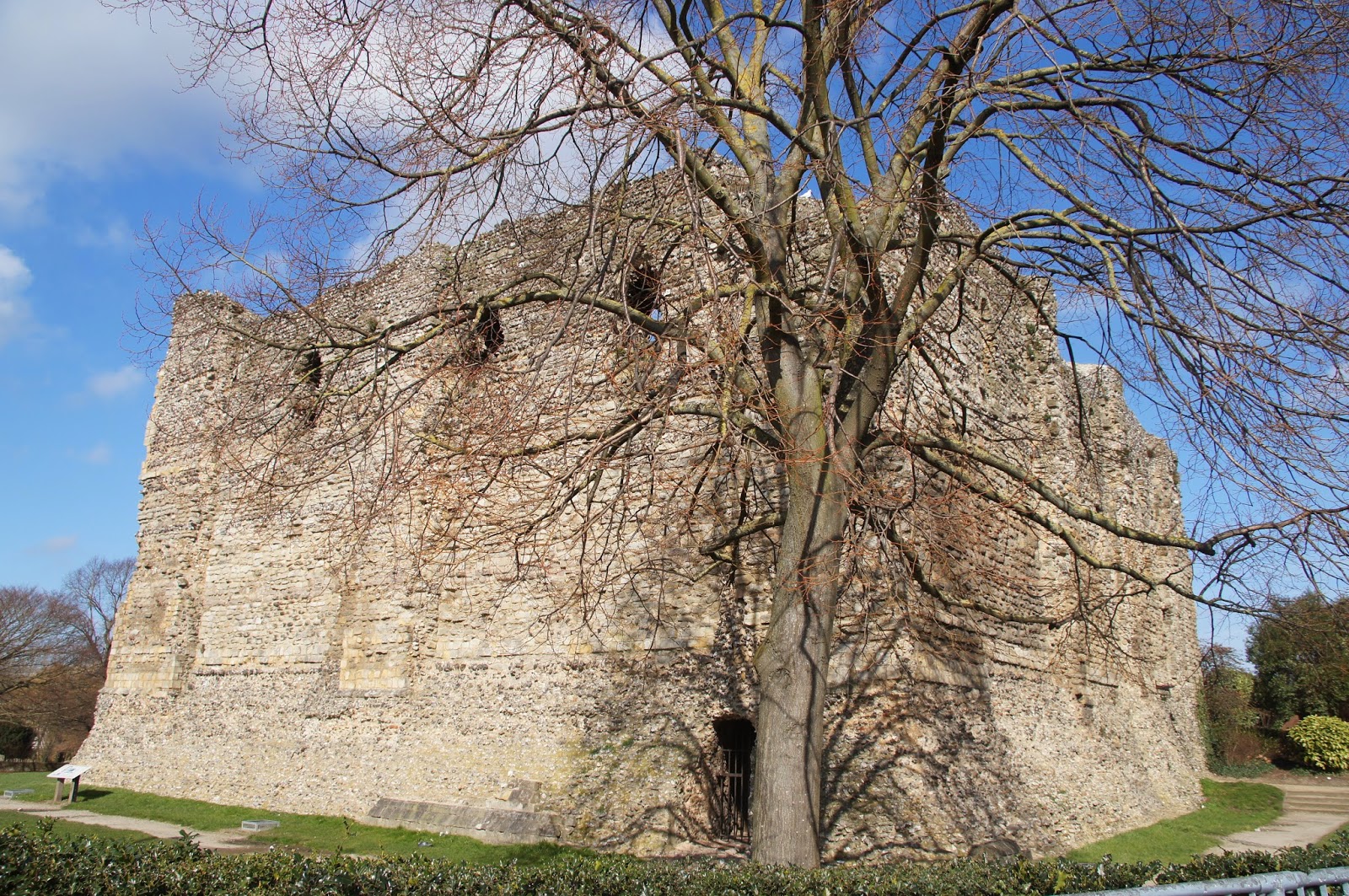 Walking back towards the centre of town we found a tourist attraction called The Cantebury Tales which is set up in an old church.  The attraction is based around Chaucers tales, a group of pilgrims set out on a journey to Cantebury.  They each have to tell a story to earn a free meal at the Inn when they reach Cantebury.  At the attraction, you travel with them through different scenes as they tell their respective tales.  It is quite dim and shadowy inside and the pilgrims are wax figures but when we got to the final "room" the dummy looked much more life like and I quite jumped out of my skin when she started talking to me!! 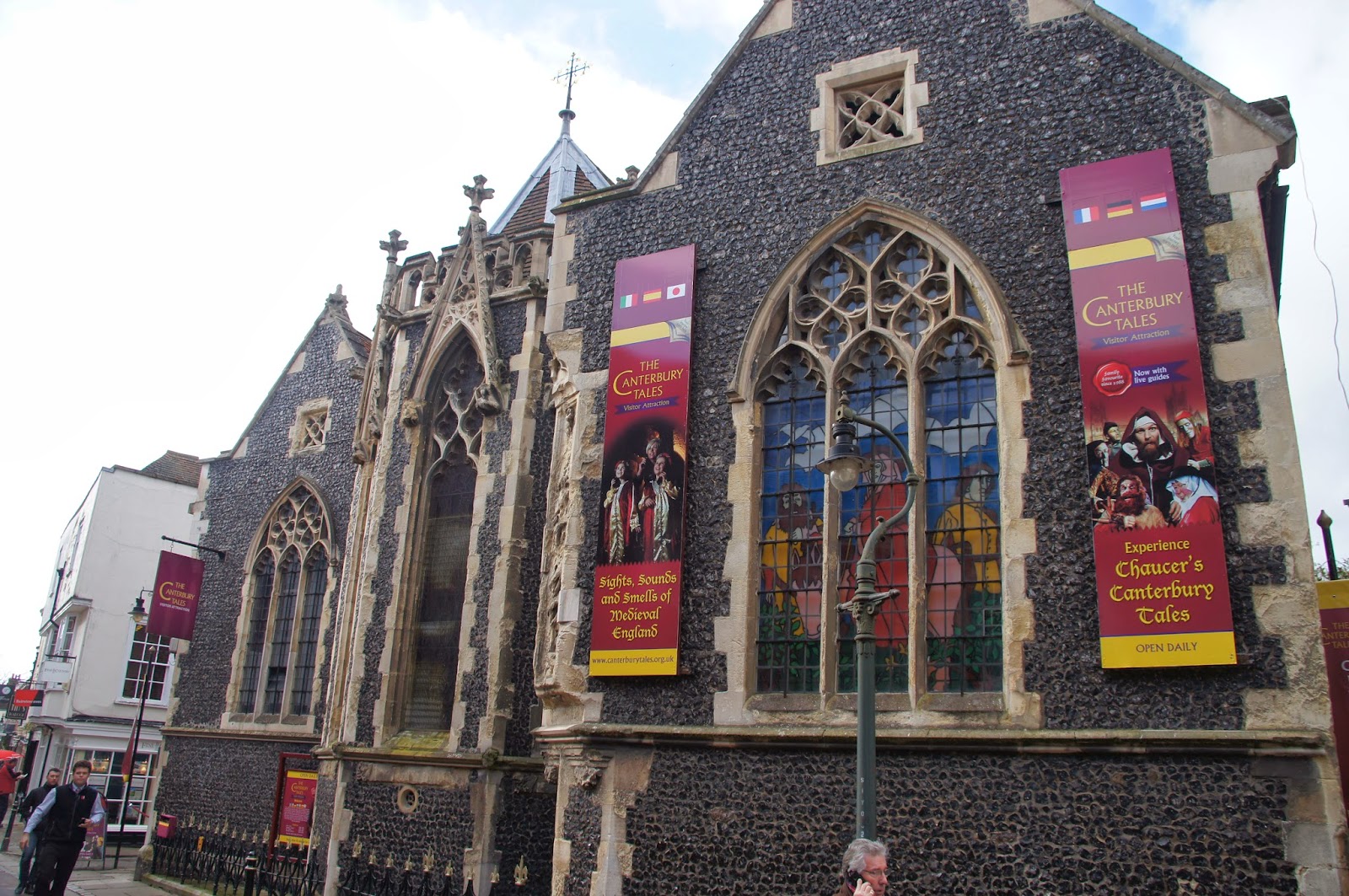 Cantebury has alot of similar attractions to York.  There is a city wall with a gate or two still standing, a castle, a cathedral, an abbey ruin and a really quaint town full of really old buildings. We strolled though the town wandering into shops and taking photos of the buildings. And we did go into the Sewing Shop! 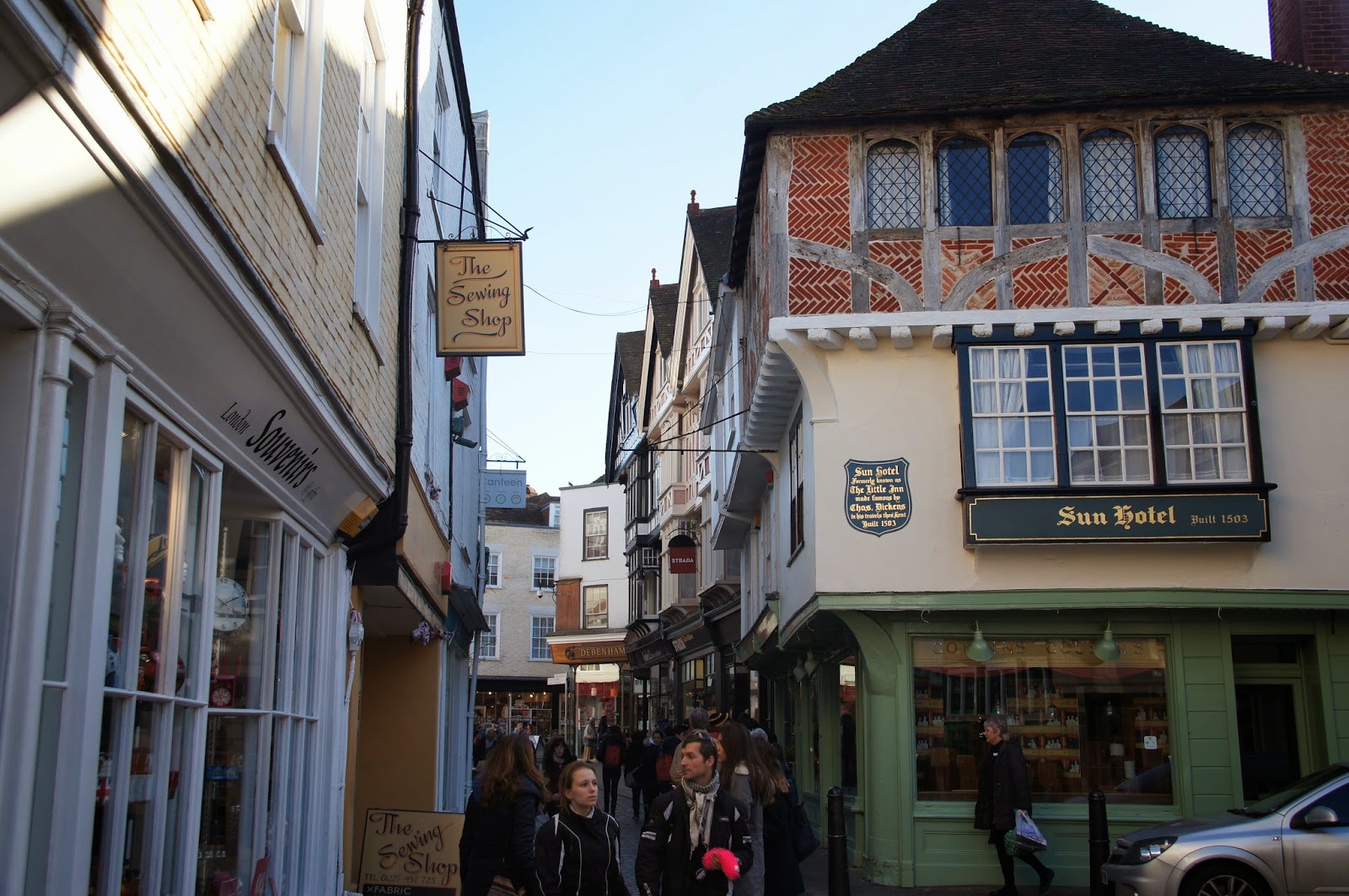 Walking down an alley on the way to Cantebury Abbey we found another museum - The Roman Museum. The town of Cantebury has been inhabited since prehistory and at one point, the Romans had a settlement here with grided streets, a forum and Roman baths. After the Romans left Britain, the settlement was abandoned altogether and it all gradually decayed over the next 100 years until another group of settlers took over the area.  Alot of roman artefacts and excavations sites have been discovered after extensive bombing in WW2.  We decided not to visit the Cathedral as it is very much like many other cathedrals and costs a fair bit to get entry (although Edward, The Black Prince is interred here and you can view his original jacket, gauntlet, helmet, shield and scabbard as well) We did visit the the Cathedral Shop and I bought a gorgeous little ceramic cat. 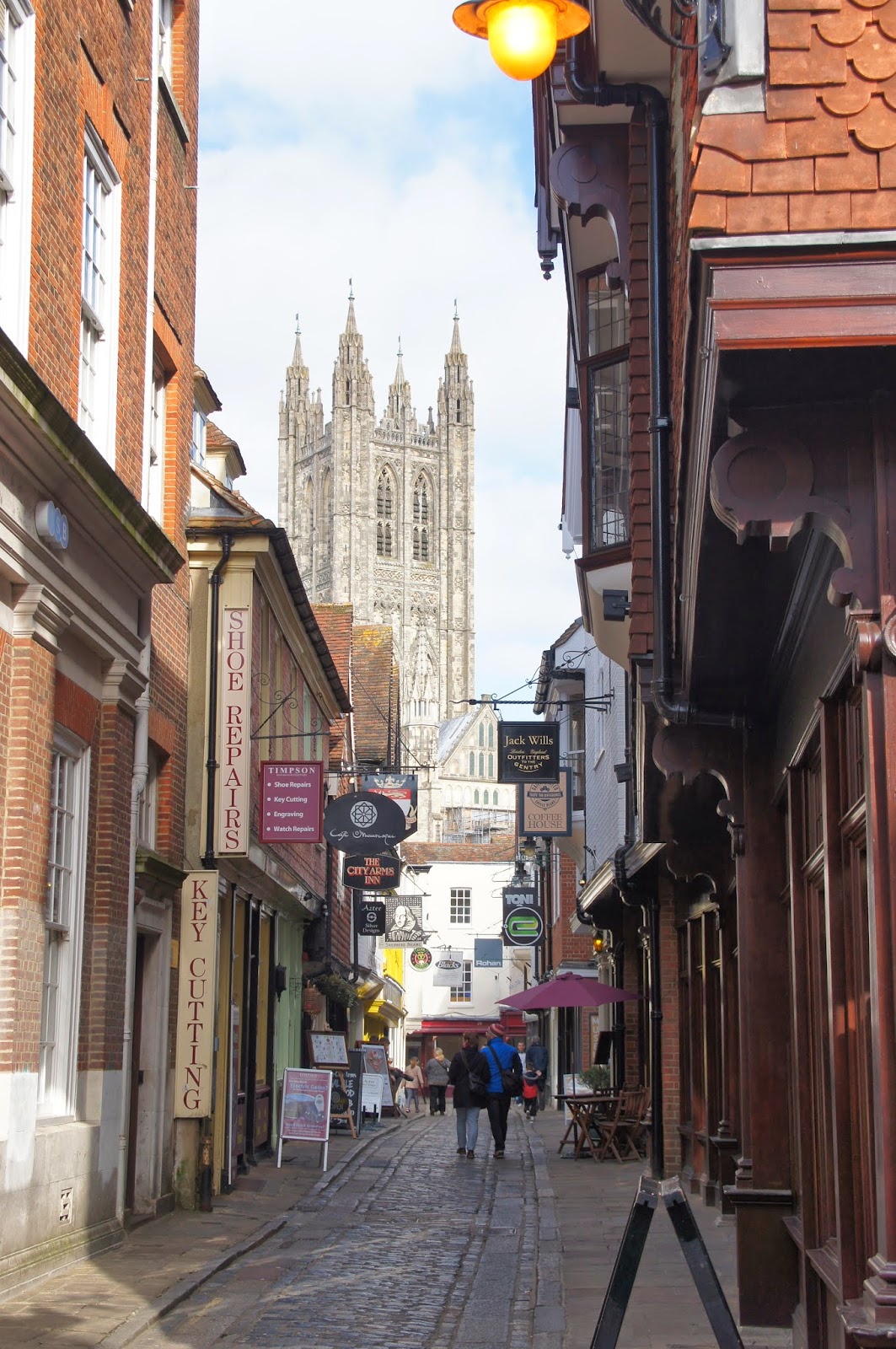 After lunch at the pub in the square across from the Cathedral we continued our walk through town and discovered the other sights.
Apart from a few disappointments, I thoroughly enjoyed the day out in Cantebury.  There is alot to do and see.  Well worth a revisit, I thought.  And we saw our first daffodils in full bloom.