Oh I had such plans to get sewing on my WIPs for the day. I didn't get much done on my March calendar so with April well and truly here, I decided to have a sewing day at home and extend it through the evening for FNWF. 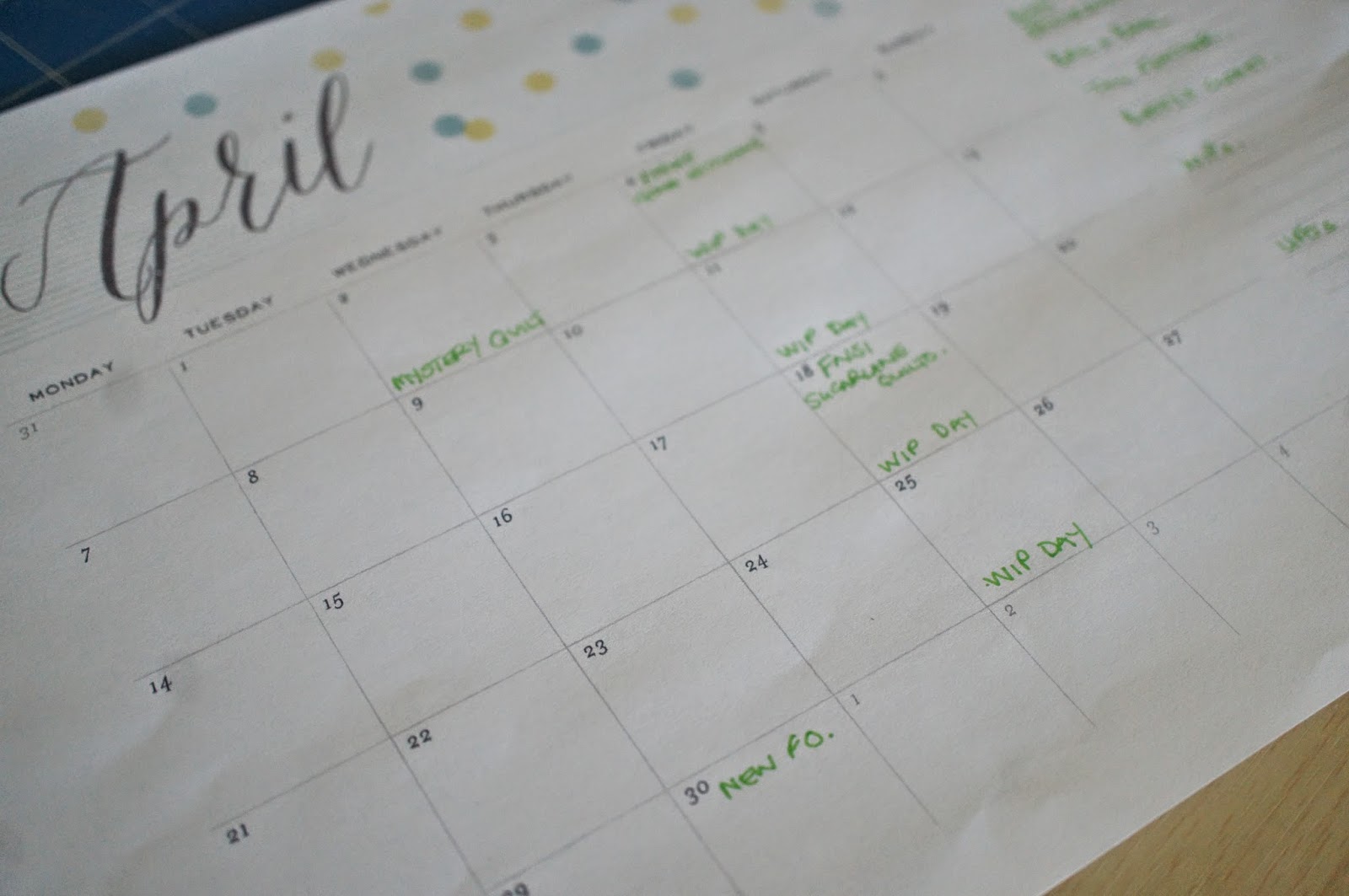 I got the washing on and started to catch up on reading some blogs for a little while, when Red called to inquire if we could include him for dinner and he would bring my gorgeous puppy girl, Clover, with him and join us on our daily dog walk at 4.  No Problem....that was ages away and I had time to read a few more blogs and write another travel post. It was early afternoon before I got into to the Creation Station and with a trip to the shops in the back of my mind I got on to working on a WIP........just to get to the next stage. Here are some of my choices organised in their respective WIP baskets. 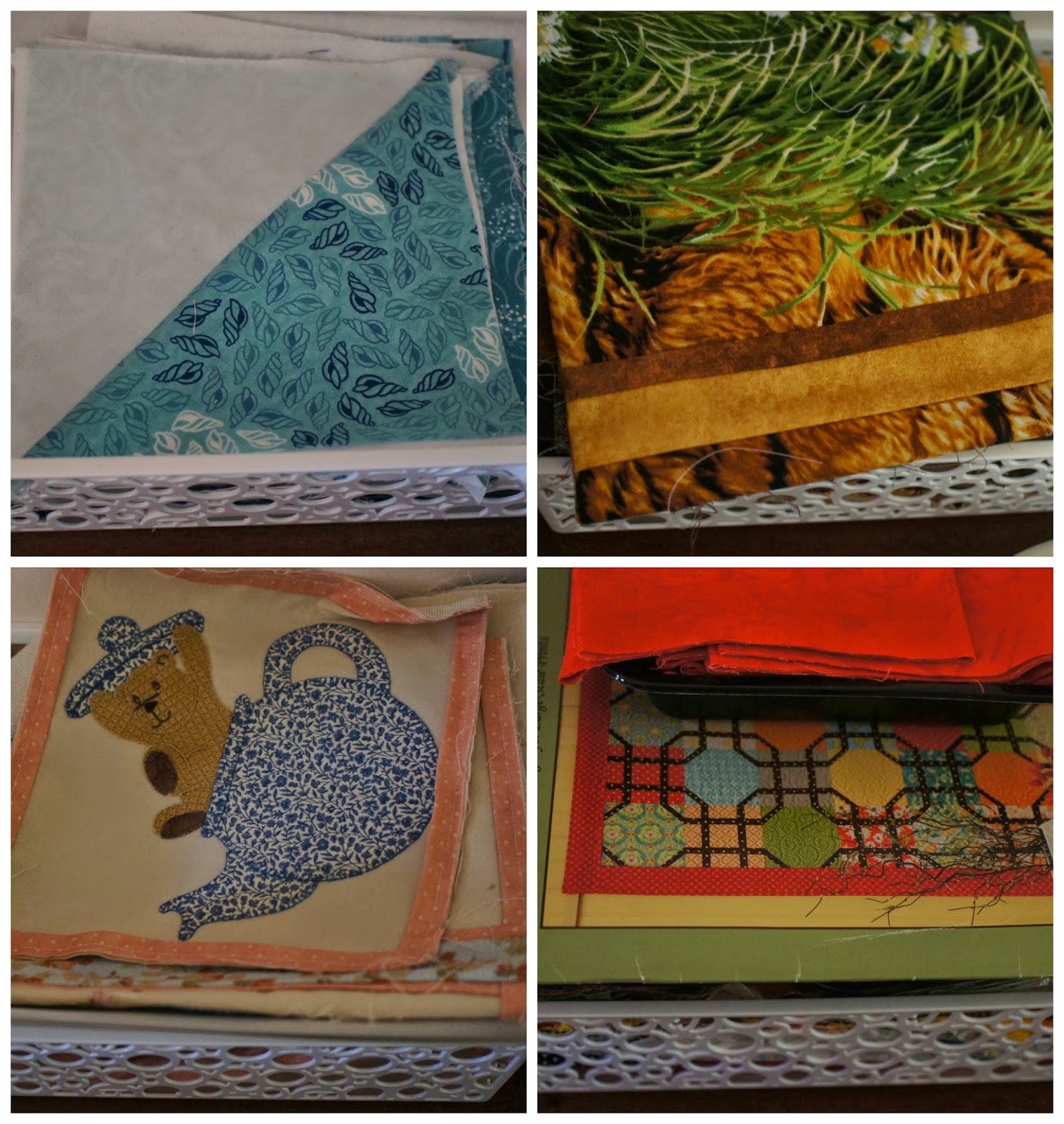 I thought I would start on Arctic Circle as it was already set out on my design sheet. I just needed one more star block to create another row. All good? not really.  Nothing was going smoothly.  I wasn't exactly following the cutting instructions in the magazine and I couldn't quite remember what measurements I had cut my units so first I had to remeasure everything. My Janome was not happy about the humpy seams today and got stuck each and every time I ran over one. I got one of the white units upside down (can you see it in the picture below?), seams were not lining up even with pins and to top it off, I sewed a whole row only to realise, at the end, that I had run out of bobbin thread.  It was taking ages but eventually, I got one block done. 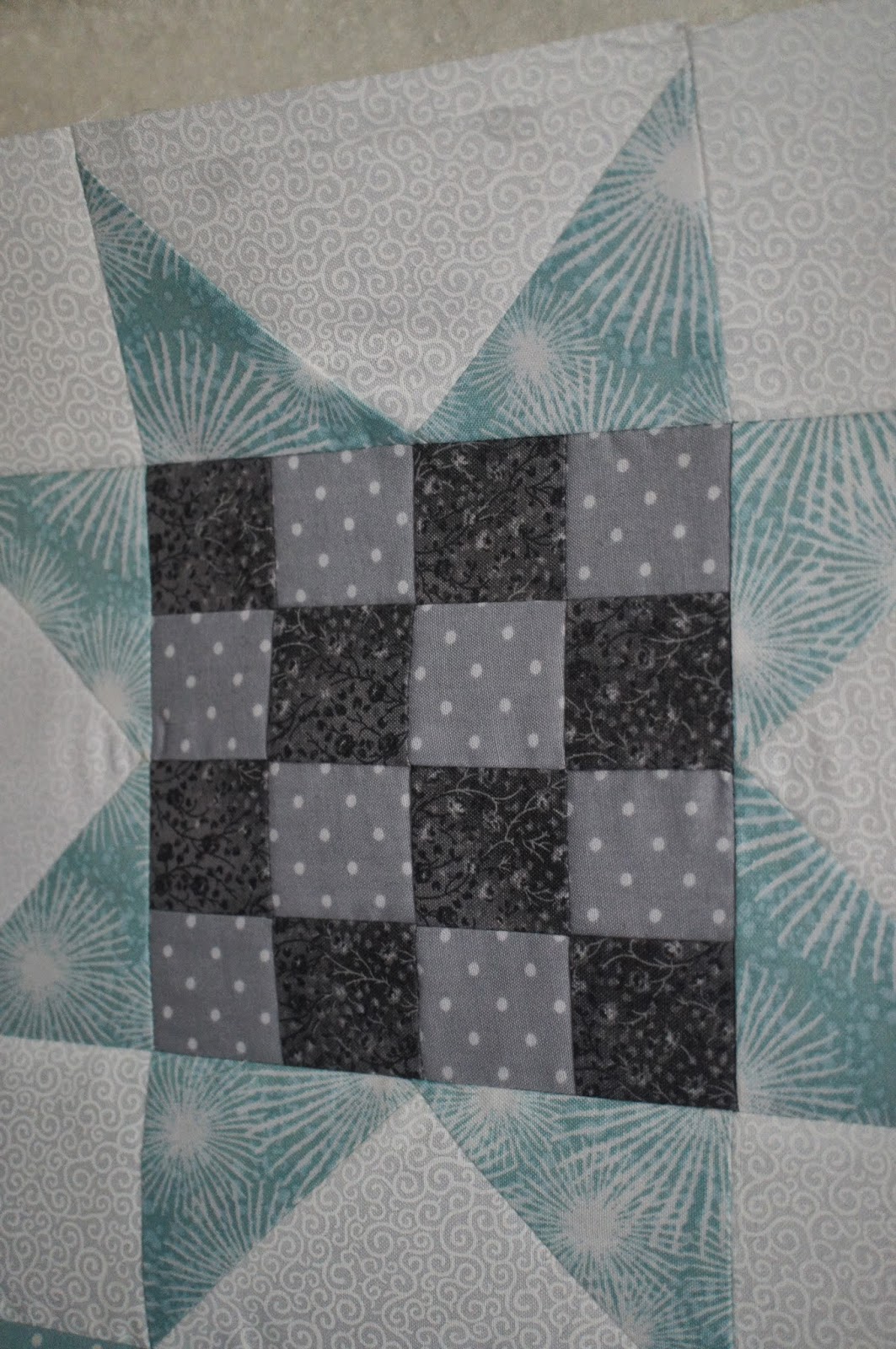 With the block finished, I had enough blocks to join together into two rows. I just wasn't sure it I had the right shade of blue for the sashing.  So I spent another length of time while I auditioned several fabrics from my stash.  Nothing was working so I decided to go back to the original fabric I had set aside and started cutting the sashing. 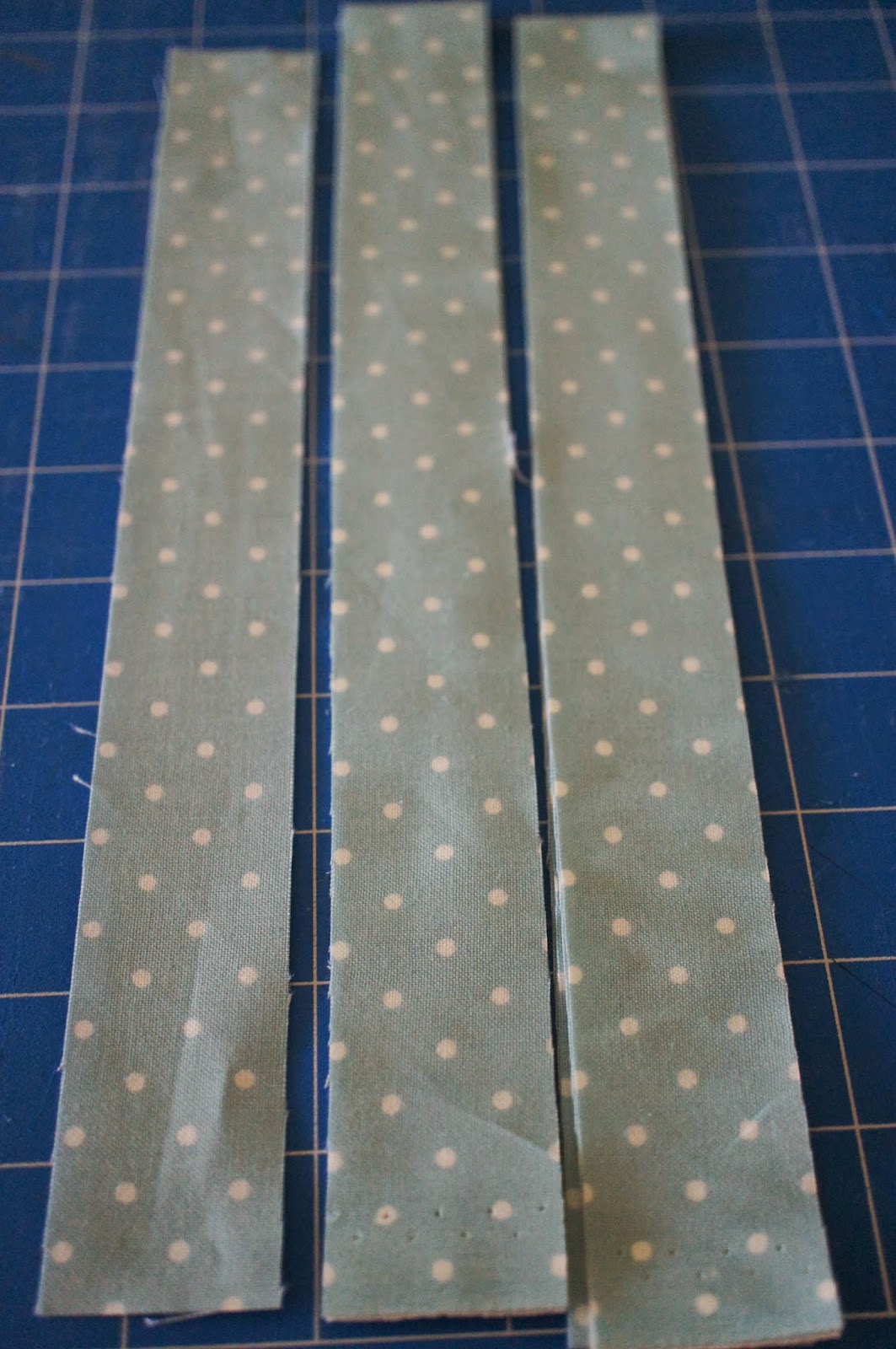 Everything was starting to fall into place at this stage and I completed row 1 and just about to start on row 2 when Red and Clover pulled into the drive.  Surely it can't be 4pm already, I will just have to put this away until later and, Oh dear,  I haven't been to the shop yet. 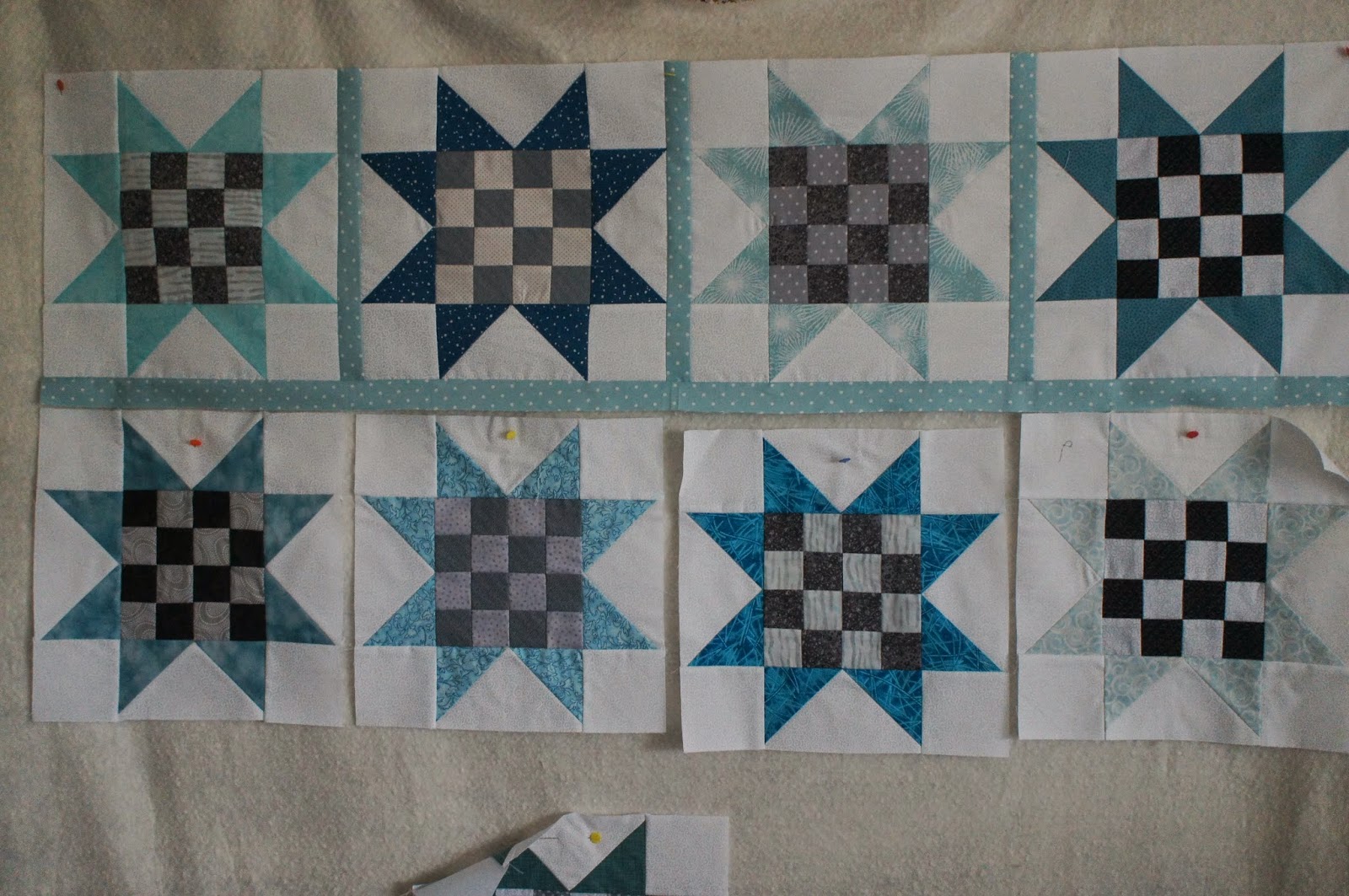 No time now because the puppy girls were all getting over excited about walking together and we set off a little earlier than usual. When we got home I sent Hubby and the boy to the shops to buy some salmon fillets and extra salad veggies while I got some potatoes seasoned and into the oven to roast, fed the dogs and had a quick shower.  They were back from the shops by then but before I got around to cooking the salmon, Miss M phoned from uni and asked if there was the slightest possiblilty anything could be salvaged from dinner for her to heat up later.    Sure! there were 4 salmon fillets and I could always cook another later.

So really, with two dinners to cook and of course I haven't seen her for a few days so we had a bit to catch up on, I didn't get back to the creation station to sew anymore.  I hope you will accept my afternoon sewing as my FNWF contribution.  The Best Laid Plans can sometimes never happen.

Right now I am heading over to Cheryl's to read about how everyone else spent their FNWF.