March NewFO - It's a Mystery

Here we are at the end of March and it is NewFO check in time again.  The project that I started this month has been on the planning board since last December.  It is a Mystery Quilt that I am doing with a few friends from my Chat & Sew group.  Marilyn, Lorraine, Zita, Helen and I meet on the first Wednesday of each month with our group leader, Tanya, to get together and sew (sewing machines are essential for this group).  As we were coming to the end of the year in 2013,  we were trying to decide what we would like to do once 2014 came around.  Someone suggested they would like to do a Mystery quilt so Tanya put her thinking cap on and came up with a Mystery quilt - with a twist.

We had a couple of months to collect 9 co-ordinating fat quarters and that is all we were told.  I chose some Japanese inspired fabrics that I had admired more than once on a display quilt at Quiltessentials and Claudia helped me gather my requirements.  We were due to start in February but I was away in the UK at this time so I missed the first month and started in March instead.

To start with, we needed to cut the fat quarters up into various squares, rectangles and triangles...... "oh dear, did someone say triangles!"  Here are my squares/rectangles laid out on the cutting diagram.  I am not cutting the triangle bits until I get my pattern each month because I just imagine the chaos all those triangles will cause. I did all this at our group session but I will be catching up by sewing the blocks as homework. 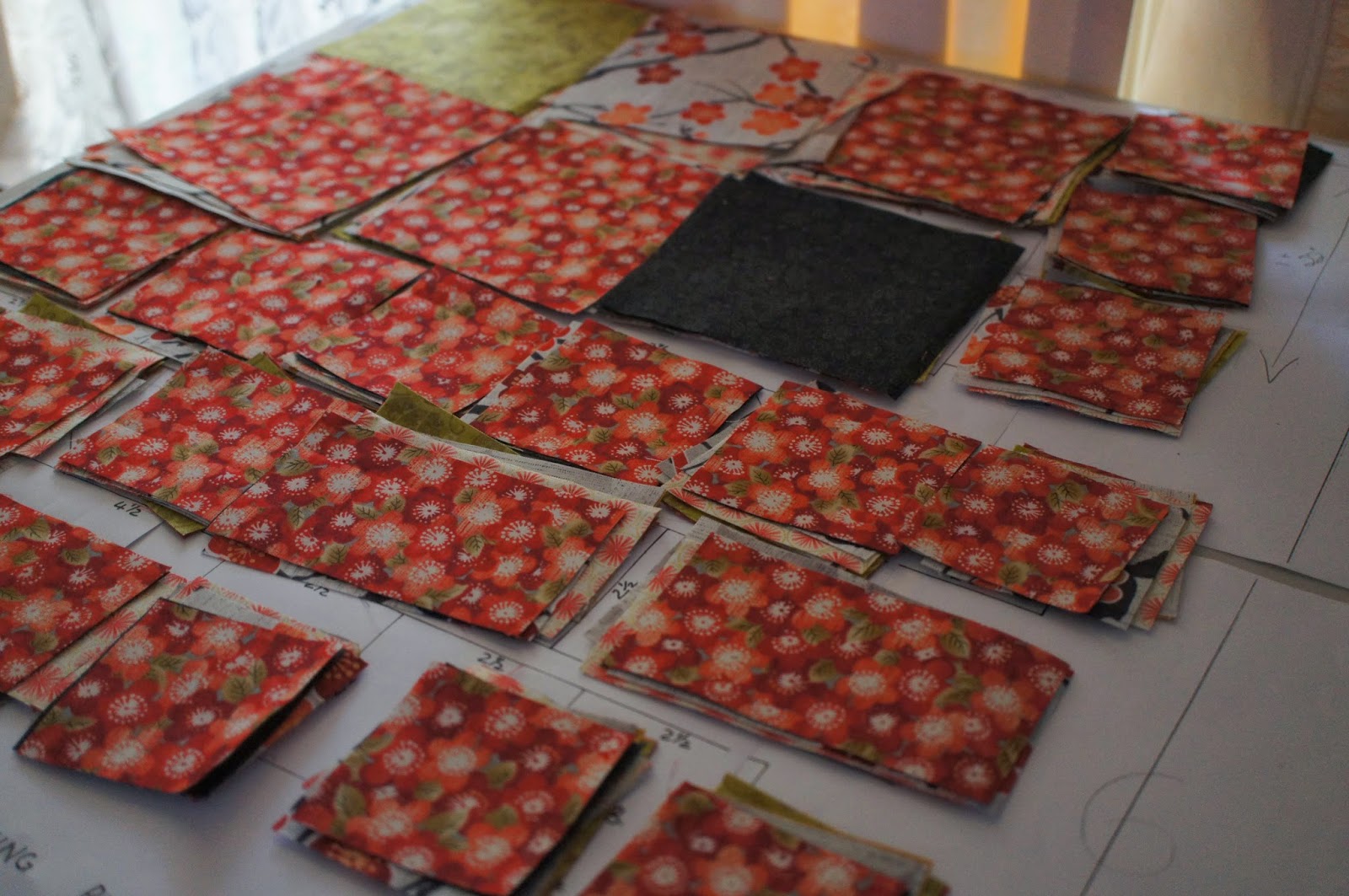 Then we cut a swatch of each FQ and gave it a number from 1 to 9 in any random order we liked....no rules yet.

After I did all the cutting out and numbered my mini swatches, I realised that colours #2 and #8, even though one has blossoms and one has birds, were too similar and if they appear next to each other,  will not look so good 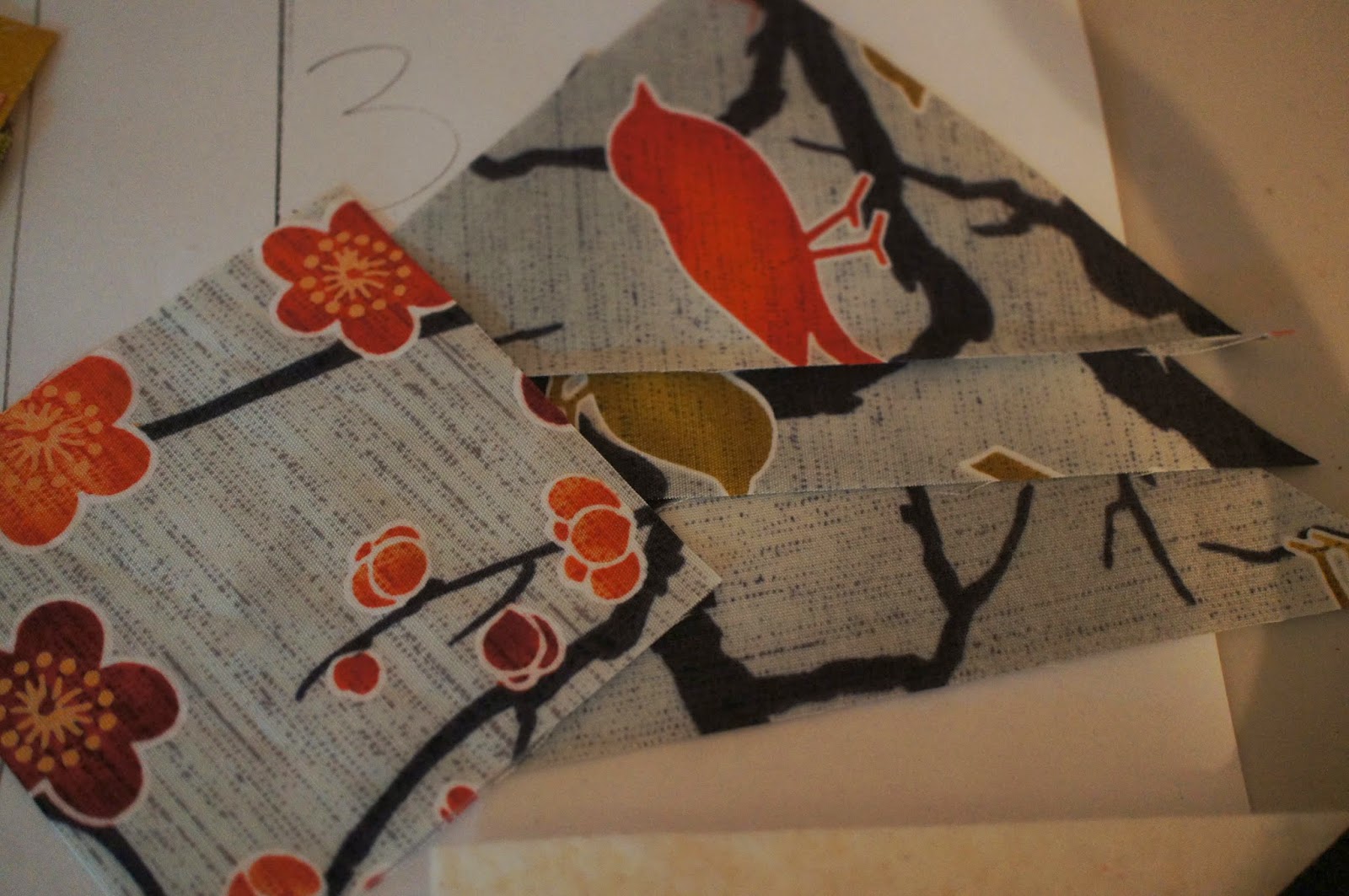 I  think I can still inter change them throughout the quilt but I need to find another contrast fabric. I am going to go with a darker shade of green. I have picked one out of my stash already but since I did not need it for my first block, I still need to finish cutting it up. Here is my new swatch chart. 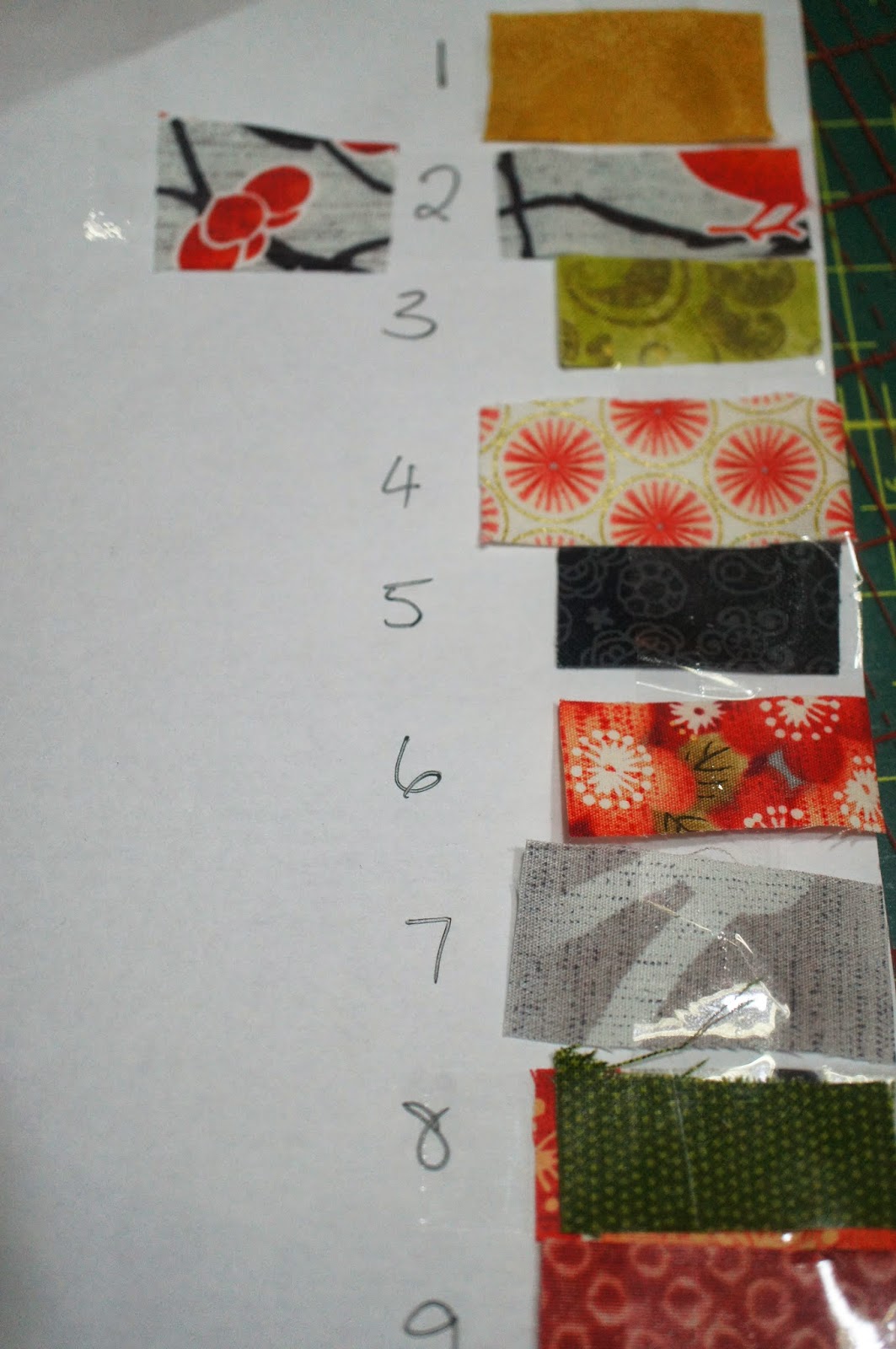 At this point I realised I needed a better method of keeping my squares together rather than the piles on the cutting guide.  Not so easy to transport to class that way.  So I cut out paper templates and drew on them whether the squares were to be cut into 2 triangles or 4 and what the length of each side was. I think this will work well for me. 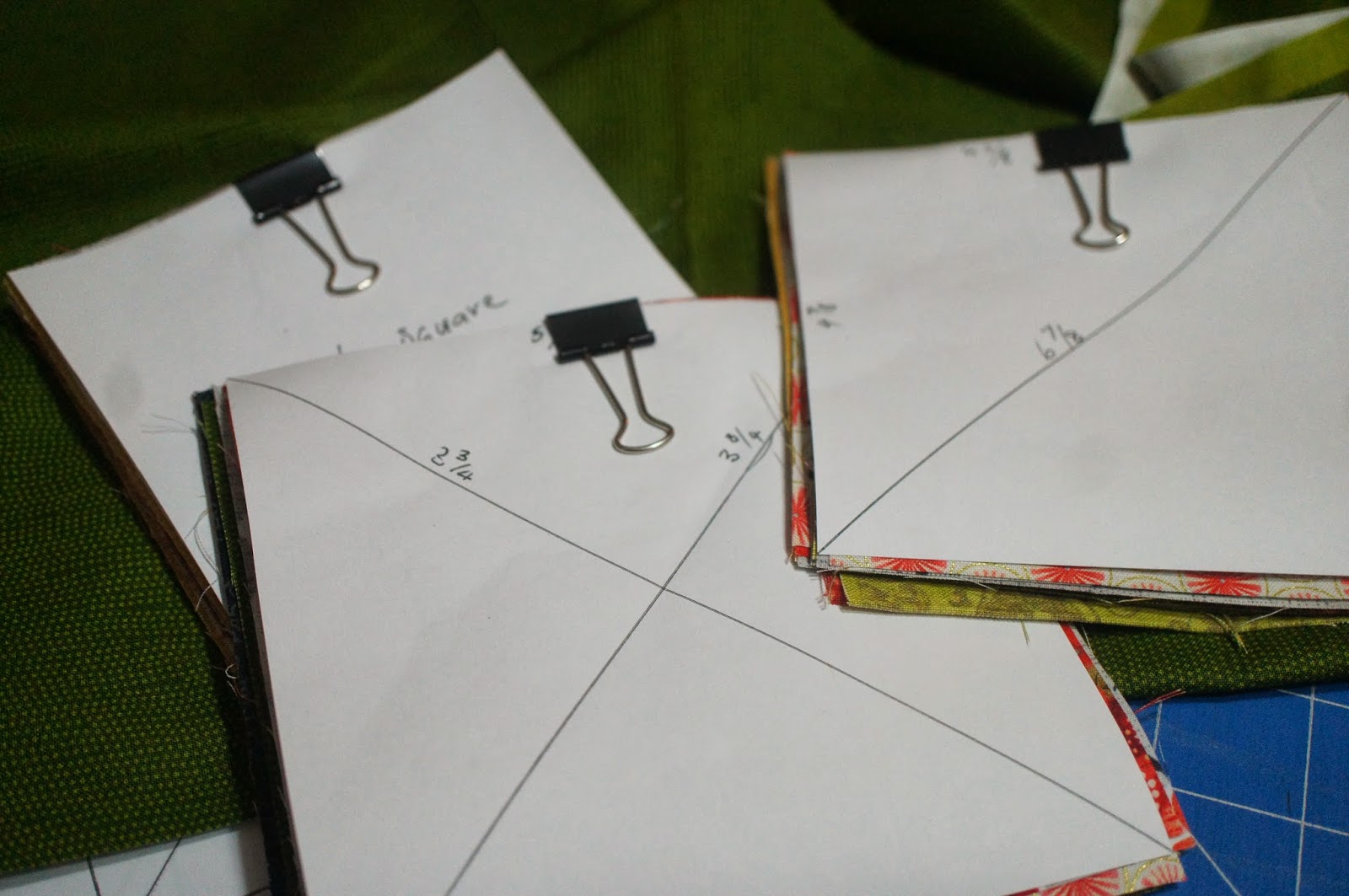 So here is the Mystery part.....Every month we get a pattern which is a little like a paint with numbers puzzle.  We have to follow the numbers on our swatch chart and find the corresponding shape to make up the blocks. Until you find these coloured shapes, you have no idea what your block is going to look like. 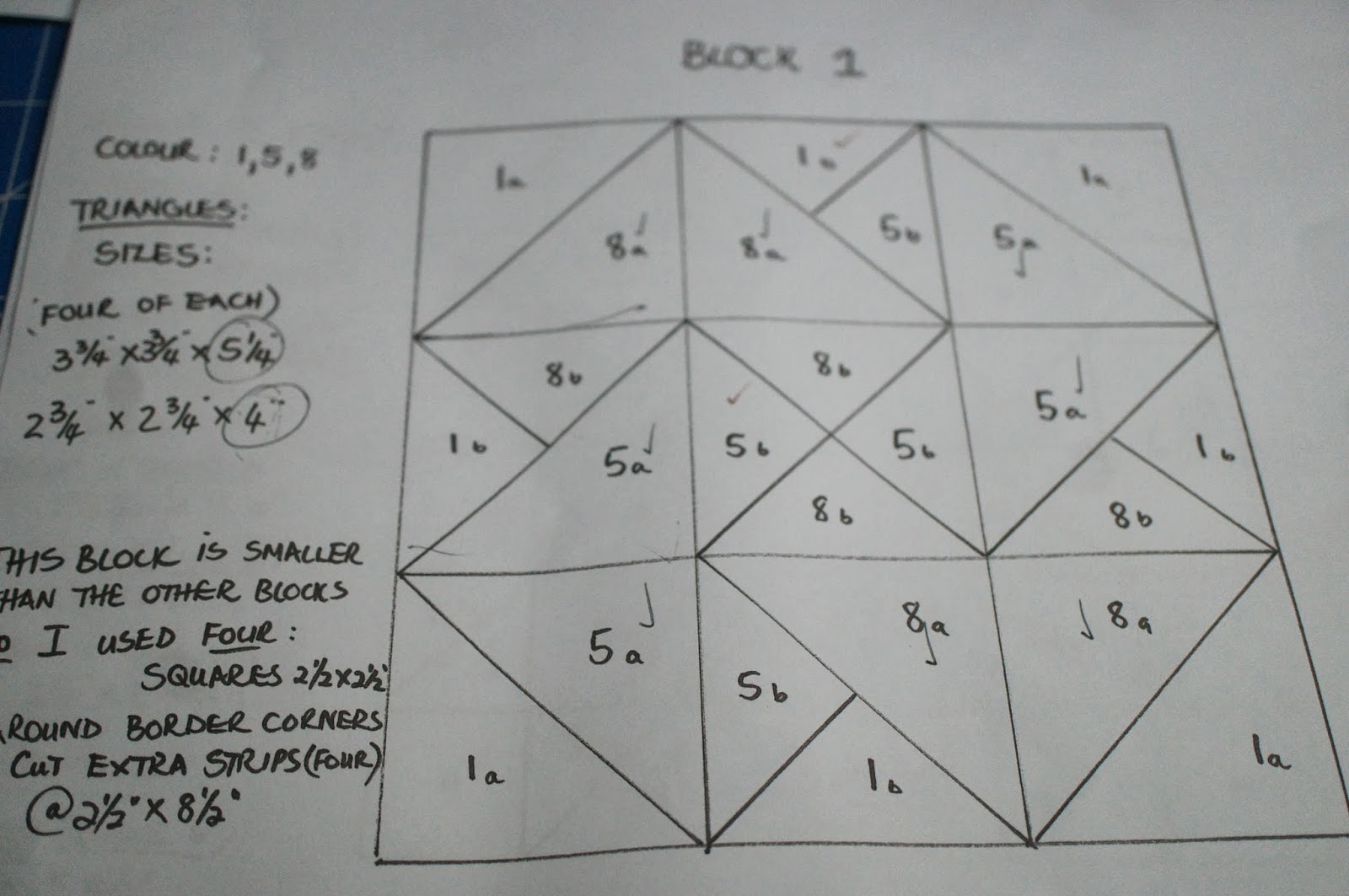 I tried out block one on my design sheet but I wasn't really happy with the charcoal fabric in the centre because I think it pulls your eye in to just see those two dark squares.  Thats ok, the rules are: I can mix up the colours of the block if I want to. 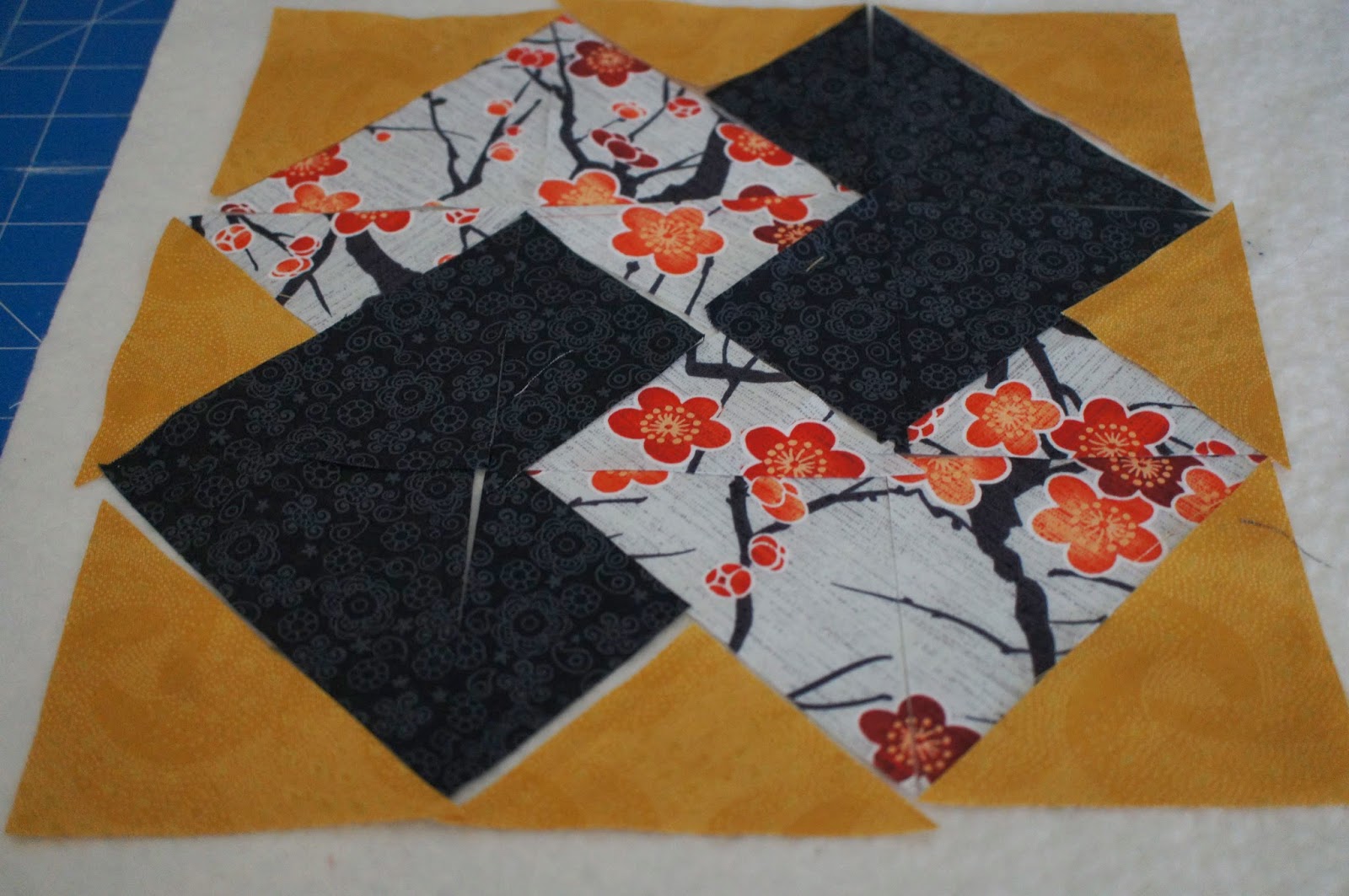 so I swapped the charcoal and the mustard and I like it better as the centre pieces are showcased equally.  What do you think? You probably recognise this as the Card Trick Block. This block has an added border which will be put on later as it is smaller than the other blocks. We get two patterns sheets a month and the second one for March was a starburst block.  I laid it out on my design sheet to see if it worked for me and I was quite happy so didn't swap any bits around. This is actually the one that I started sewing first. 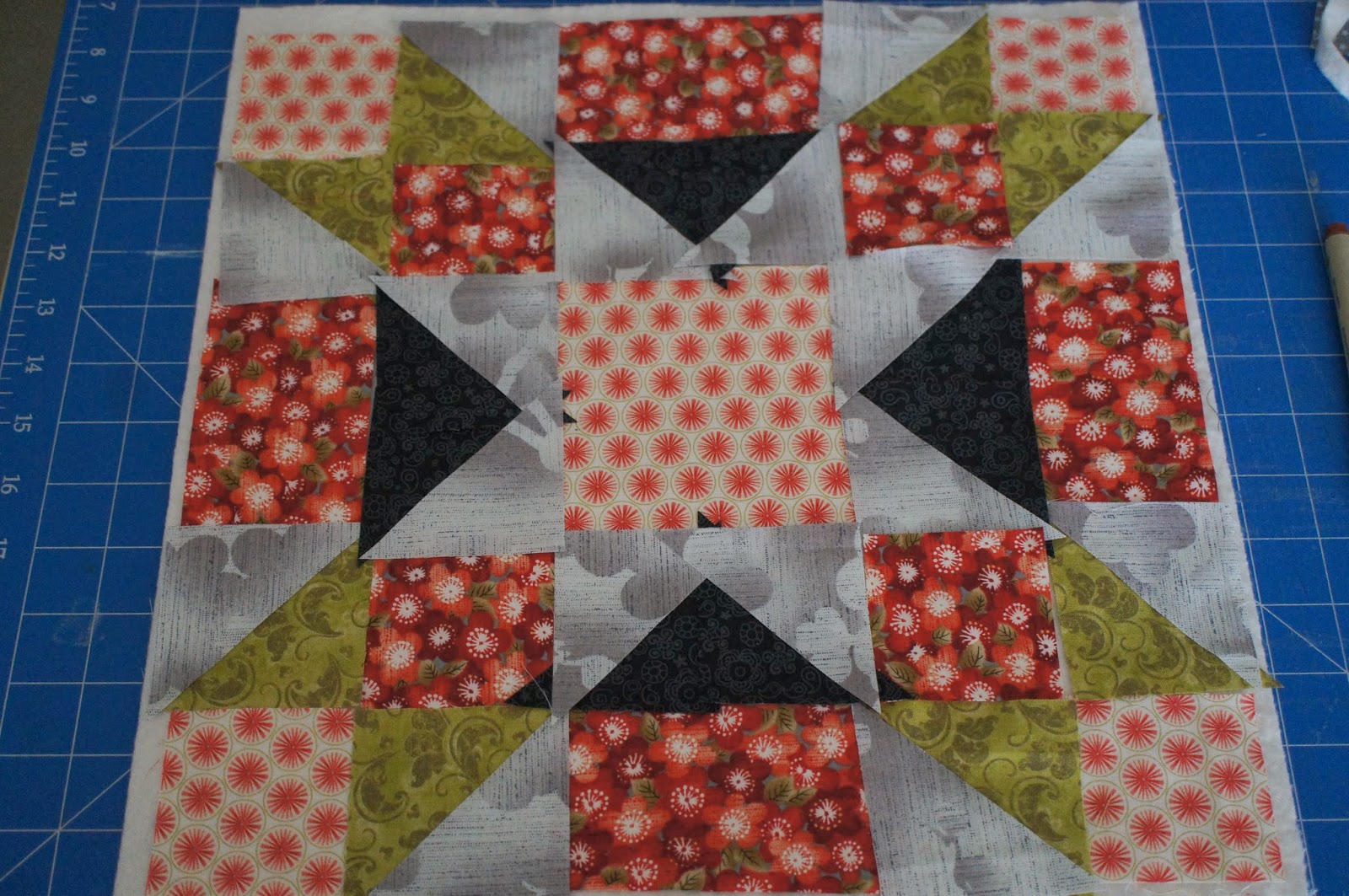 While I was cutting out at the group session, the other girls were sewing their blocks and were having such a lot of trouble sewing those triangles(.....yep, I knew it.....triangles are the pits to sew together.....) so there was a lot of stitch unpicking being done. Having witnessed all this unpicking, I was a bit nervous to start sewing.  I decided to use my Pfaff machne as it will have to travel to the classes and is much easier to travel with and it has a built in walking foot which I thought would be advantageous when I very carefully sewed the triangles.

Slow and steady wins the race?  Oh yes,  my triangles sewed together beautifully and I was ecstatic that I did not have to unpick any triangle units.  I did have to unpick a row that I somehow turned upside down but all in all, it went together so well. Lovely matching seams and sharp points. 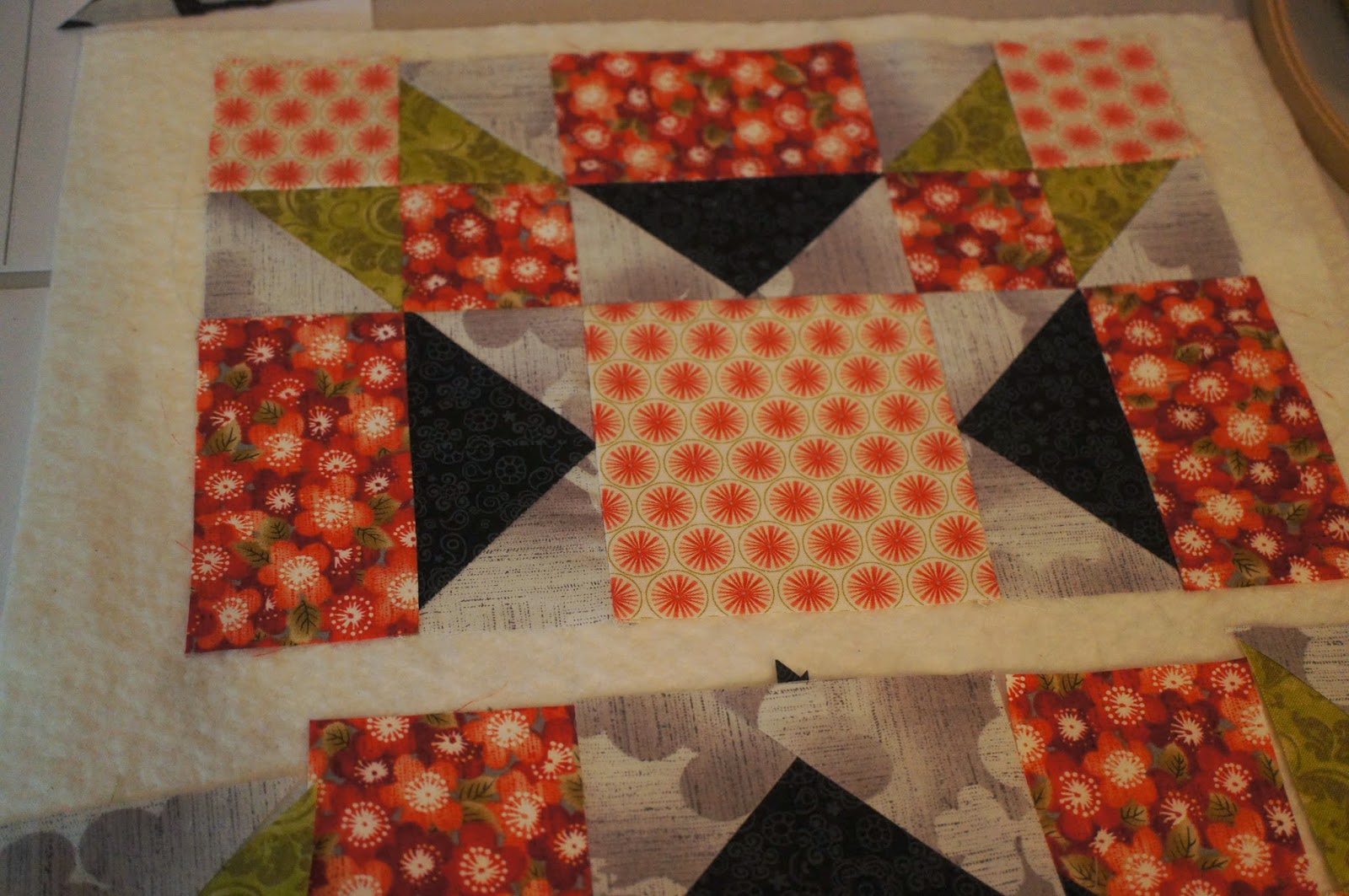 Update
That was yesterday and I finished block two so today I was going to return to block one and lay out blocks 3 & 4 on my design sheets ready for the class on Wednesday.  I set to sewing and had all sorts of trouble with my sewing machine today.  It just didn't want to go over the seam humps.  I rethreaded it several times, checked the feeddogs and even changed the needle which worked but not entirely until I had struggled through sewing it together, and then....OOPS....when I was pressing the block I realised that I had sewn it just the way I said I wasn't going to! Well it will stay like that now and I will assess it when I am finished all the other blocks. Maybe I will redo it, maybe not. 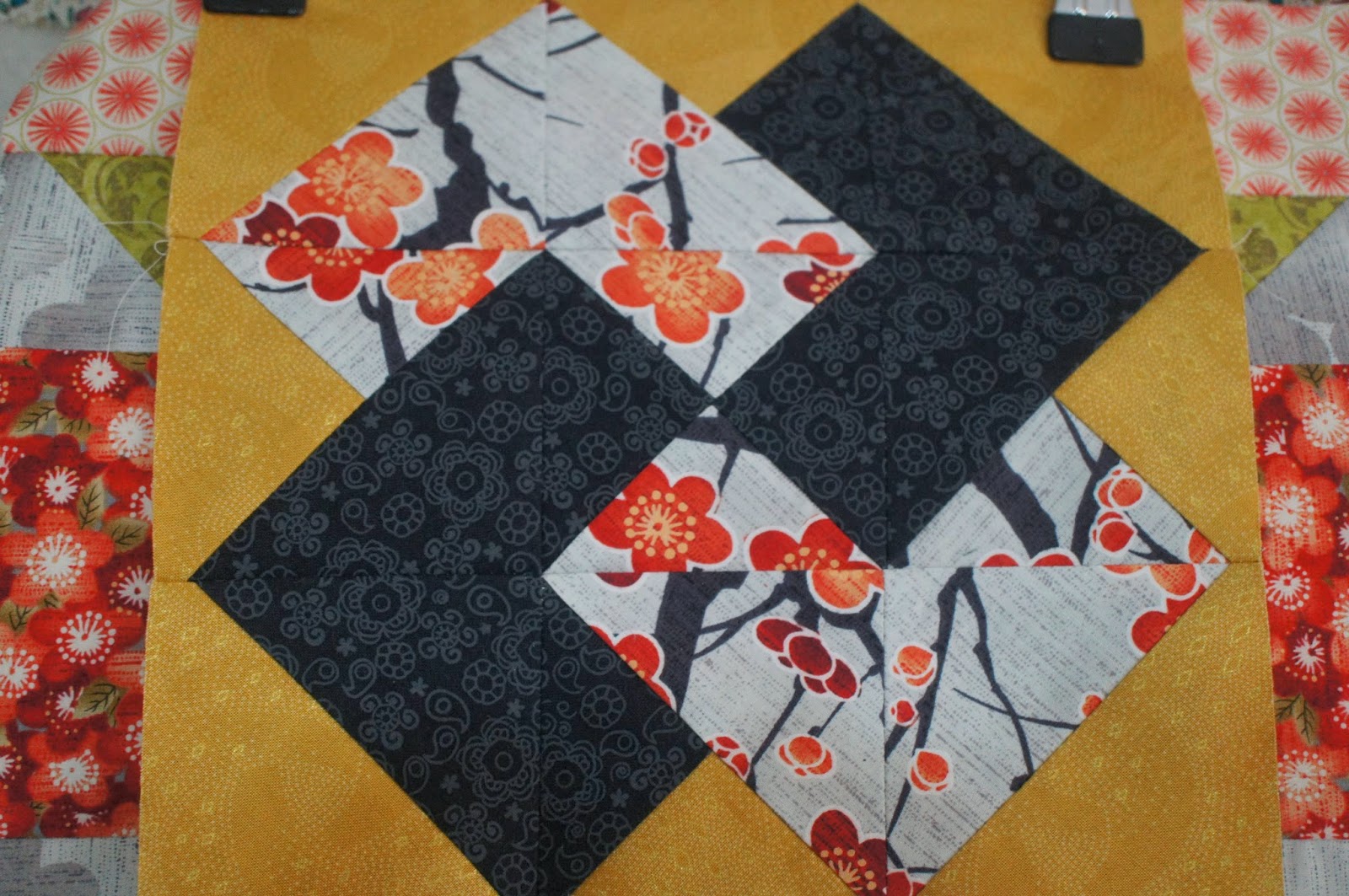 With block two out of the way, I started to puzzle out the next block. Initially I was not happy with the suggested layout of colours so I have changed it a couple of ways. The first one is the original. I kind of like the middle layout best but I would be happy to hear your views.

I don't think Block 4s layout needs changing but I tried it a couple of ways just to see what would happen. I am leaning towards the first pic which is the original way......Miss M agrees.

With the two layouts done, I am ready to meet up with the girls on Wednesday and sew them together. I will update my progress on this quilt each month as the classes come up. 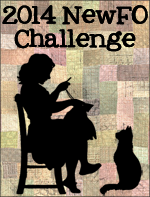 I will return to blogging about my UK trip in a couple of days.