A sprinkling of snow

The wind had definitely whipped up a chill overnight but on waking up the next day we decided to head to Whitby.  Last time I did this, we travelled by train and it took close to four hours and a change of trains to get to Whitby so this time I was keen to try the bus.

Although the weather reports had promised a fine day, it started off very wet and I was starting to wonder if the sun would make any kind of appearance.  And then I got a big suprise.......surely that wasn't......yes it was......SNOW! 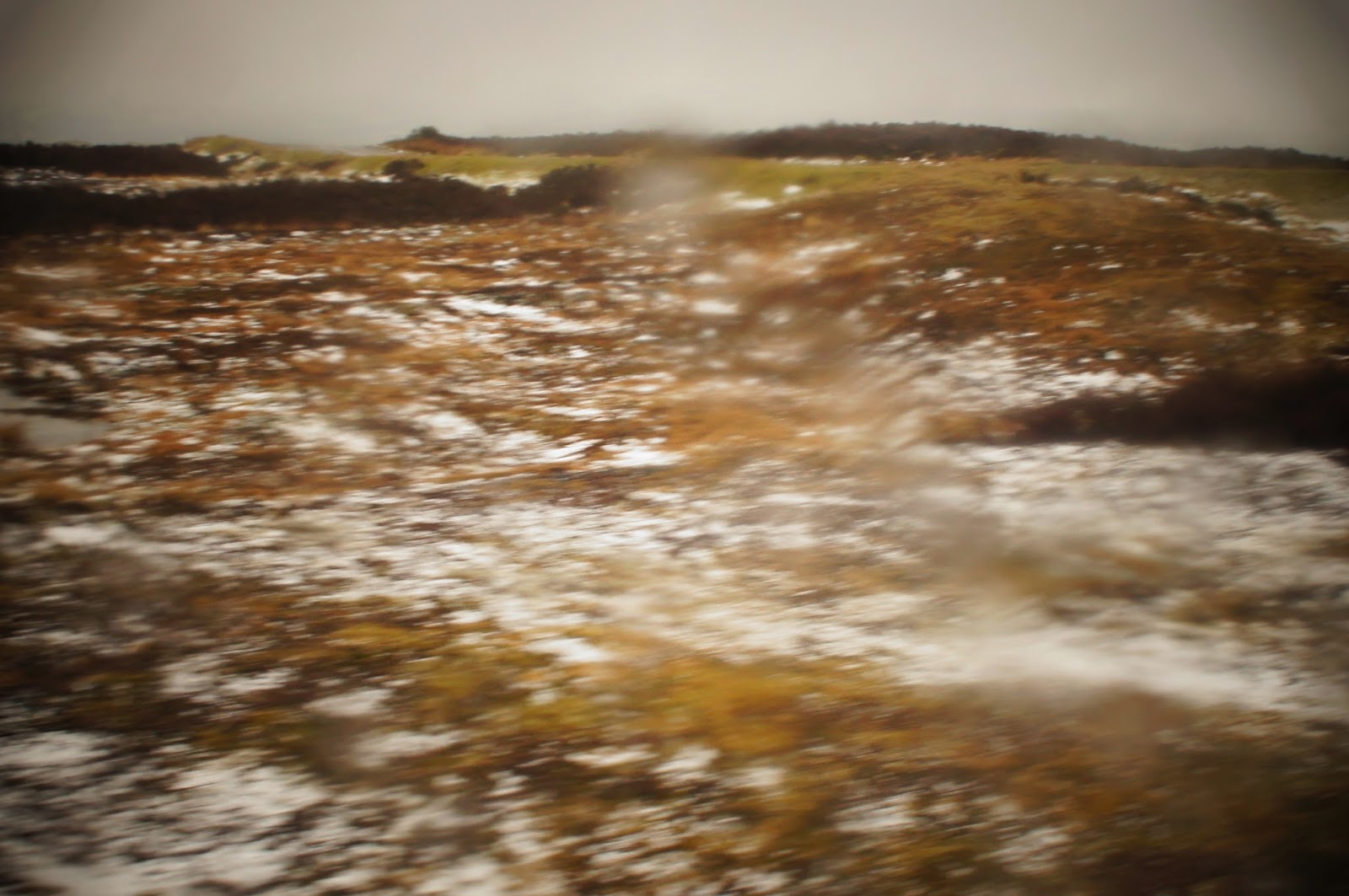 There we were, travelling across the Yorkshire Moors in a Double Decker bus, no less, up and down hills on winding little roads and it was starting to snow. The locals on the bus must have been quite bemused by our excitement...well Miss M has never been this close to snow and I haven't either (for a good many years).  Can you imagine us with our noses pressed up against the misty windows, trying to get a better look, wishing we could stop the bus for a chance to go and crunch through it. 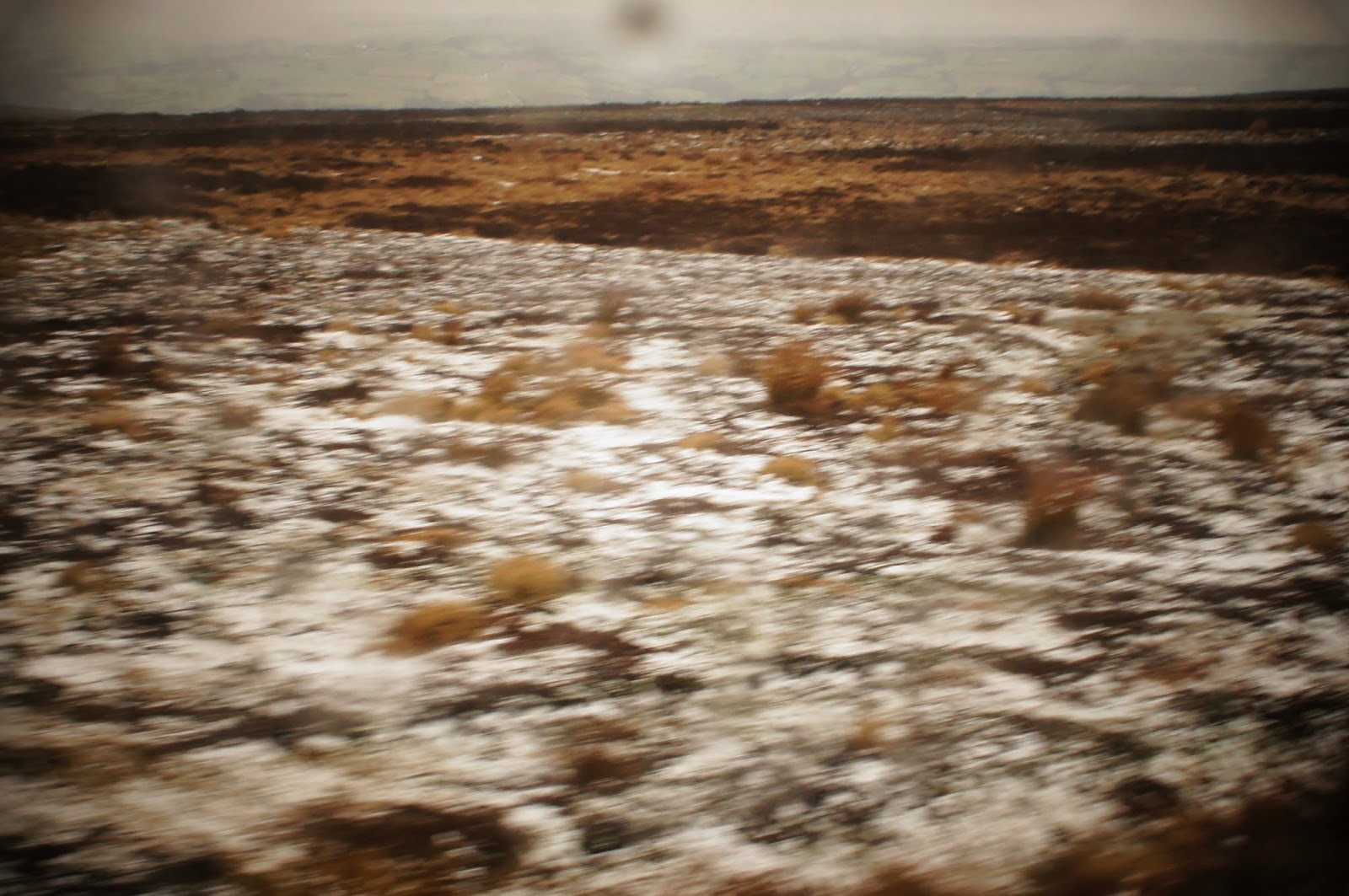 And then things got even more exciting (for me, anyway).  I was always a long time fan of the tv show "Heartbeat" set on the Yorkshire moors with regular visits to nearby Whitby and we got to travel through Goathland which is the real life set for the show.  The bus drove into this very out of the way village and did a three point turn and then drove out again without stopping.  Bizarre! but not as bizarre as those two loonies on the bus oohing and aahing over the village green, the pub and the Aidensfield Garage, which belongs to "Mr Scripts"! There go the locals on the bus, rolling their eyes again.

By the time the bus pulled into Whitby, the snow had disappeared and the sun was desperately trying to make an appearance.  Luckily the rain had stopped but we were to be disappointed when we got to the top of the steps to the abbey ruins.  Because it was February and out of season, the abbey was closed to visitors. I was desperate for Miss M to get a glimpse of this beautiful historical attraction, so we continued walking around the very high wall till we found a spot low enough to get a good view. Yep, been there, done that, got the photo to prove it! 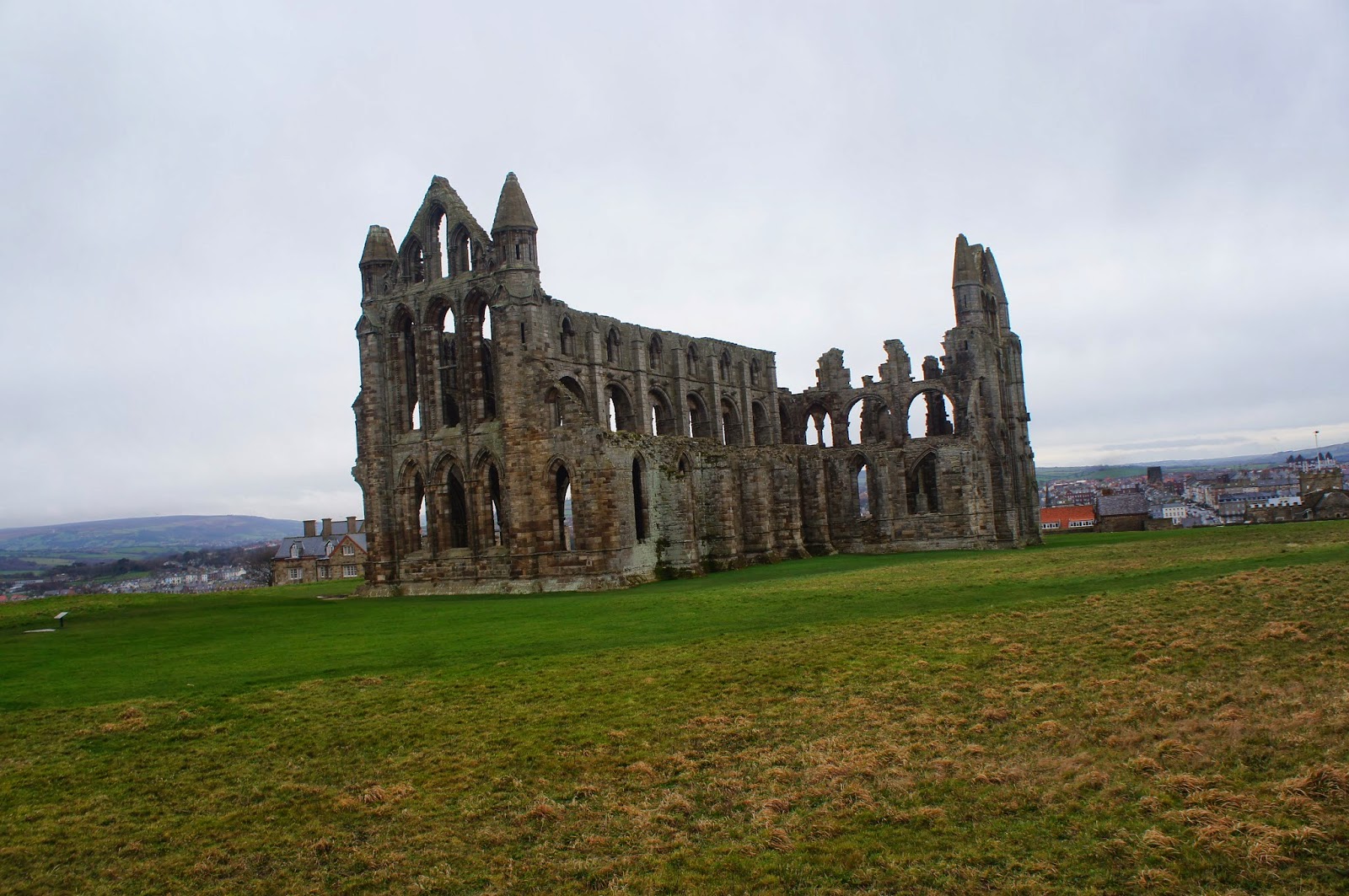 Did you know?.......this ruin helped inspire Bram Stoker's writing of Dracula! I have never read it, but apparantly parts of it are set around the town of Whitby where he spent holidays in the 1880's and 90's.

Even though we couldn't get any closer to the ruins, the walk up those (close to 200) steps was worthwhile, just to see these lovely chaps with the town in the background. What a view they had, if they really cared for one. 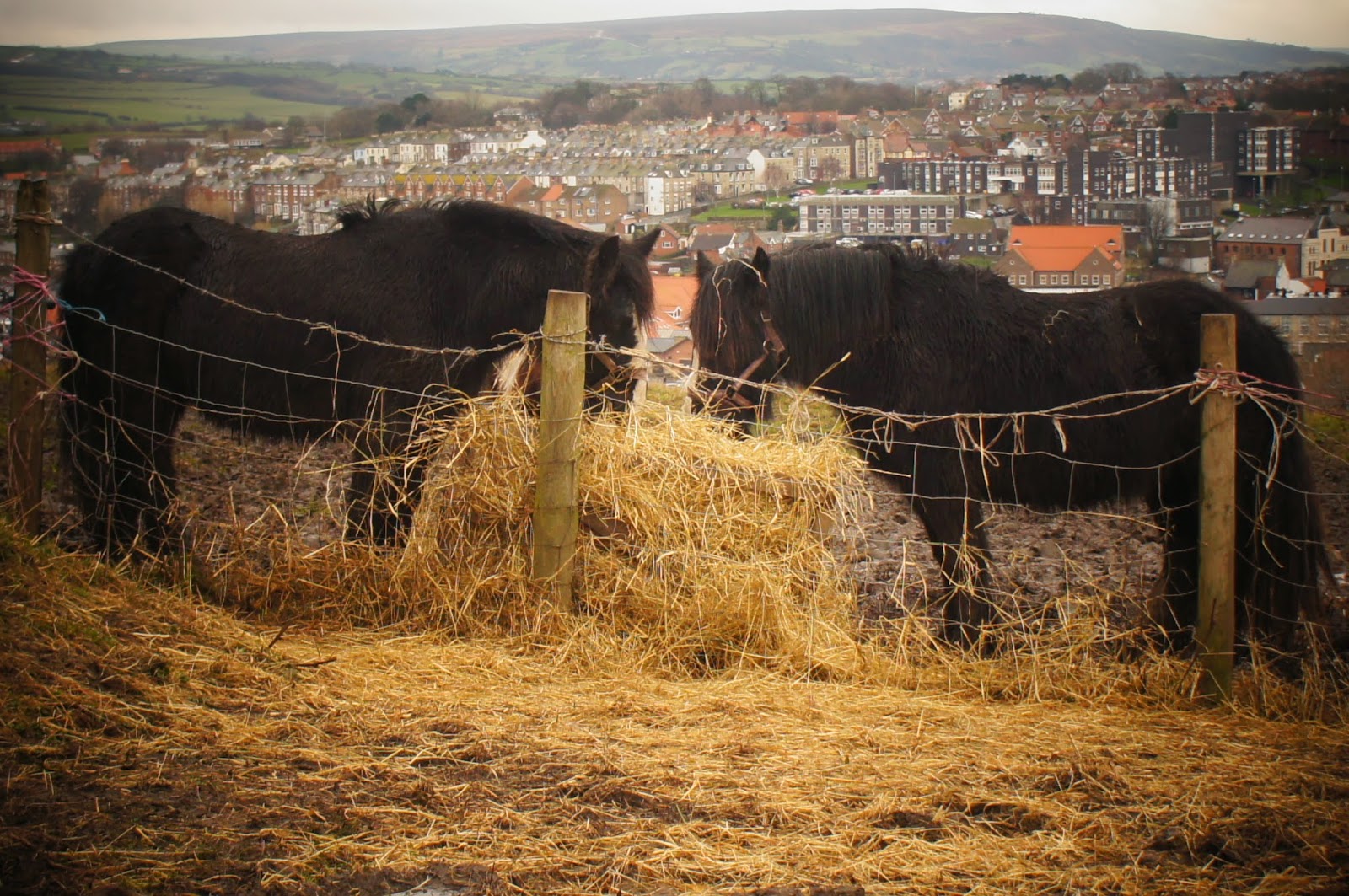 Then back down those steps for a stroll around the shops 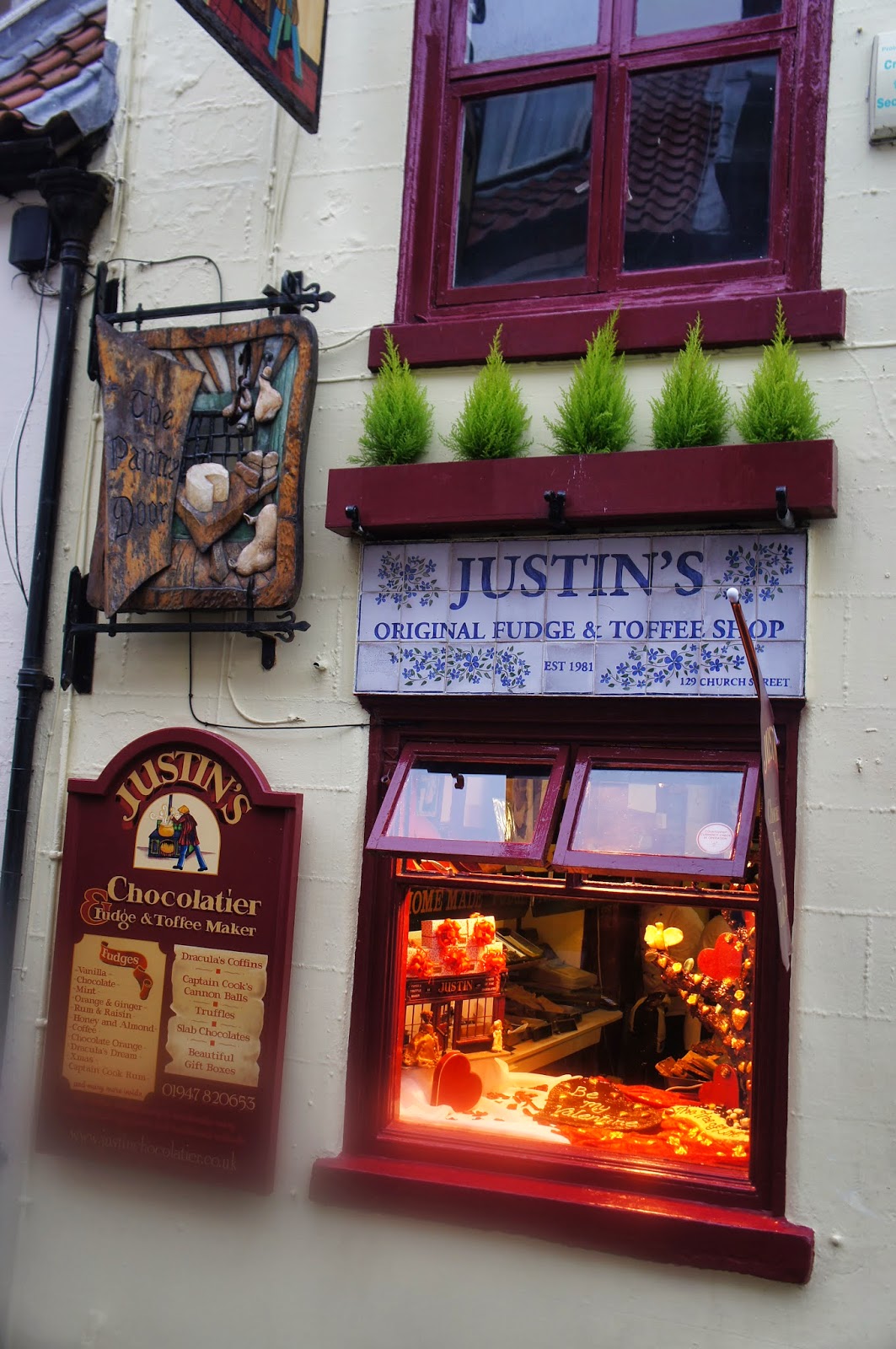 before heading to the Magpie Cafe for a, later than usual, lunch. Fish and Chips, of course! 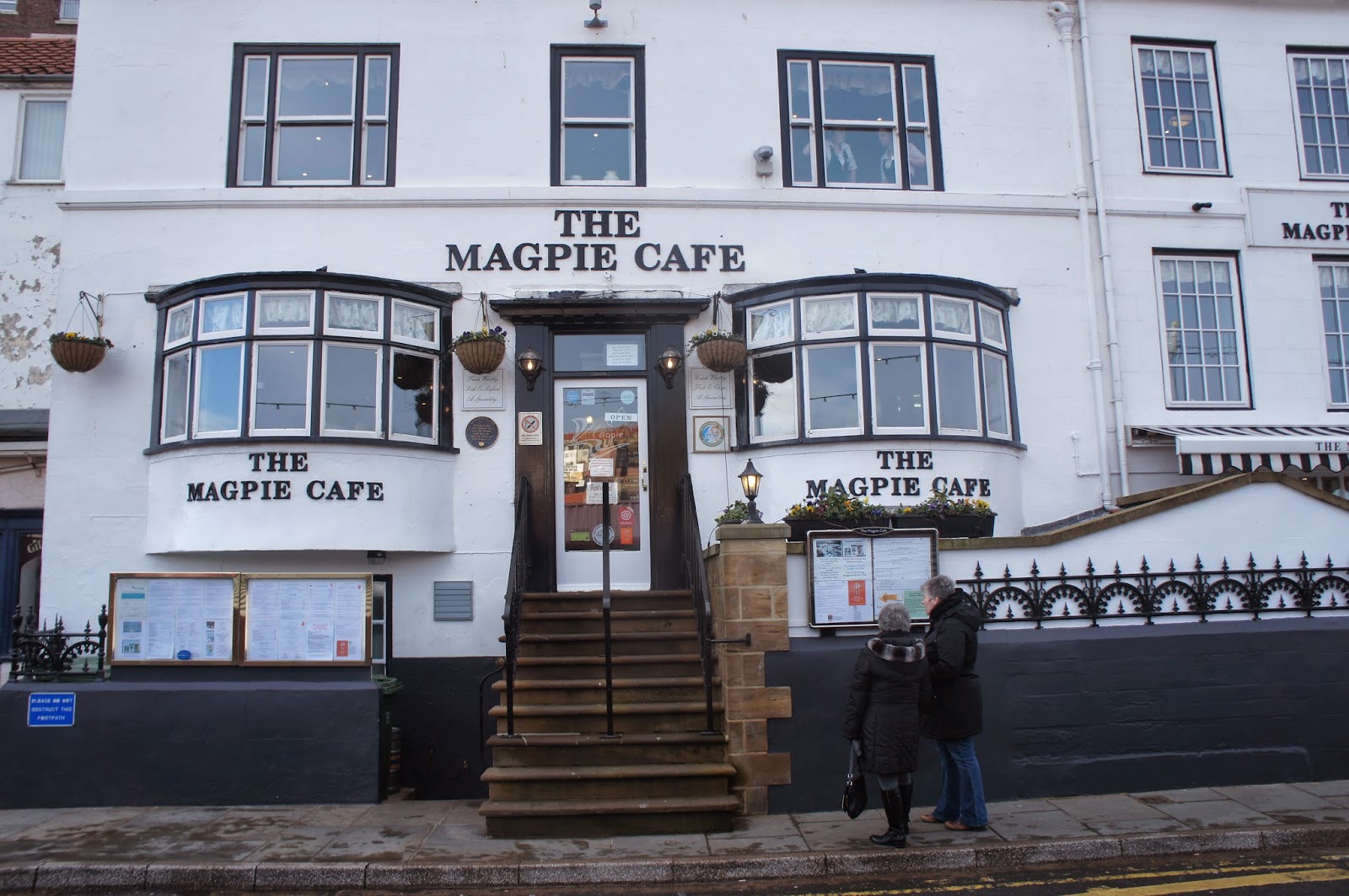 The beach doesn't look very exciting today.......brrrr.......it really was cold, especially on the harbour wall.  Time for a walk to the other headland. 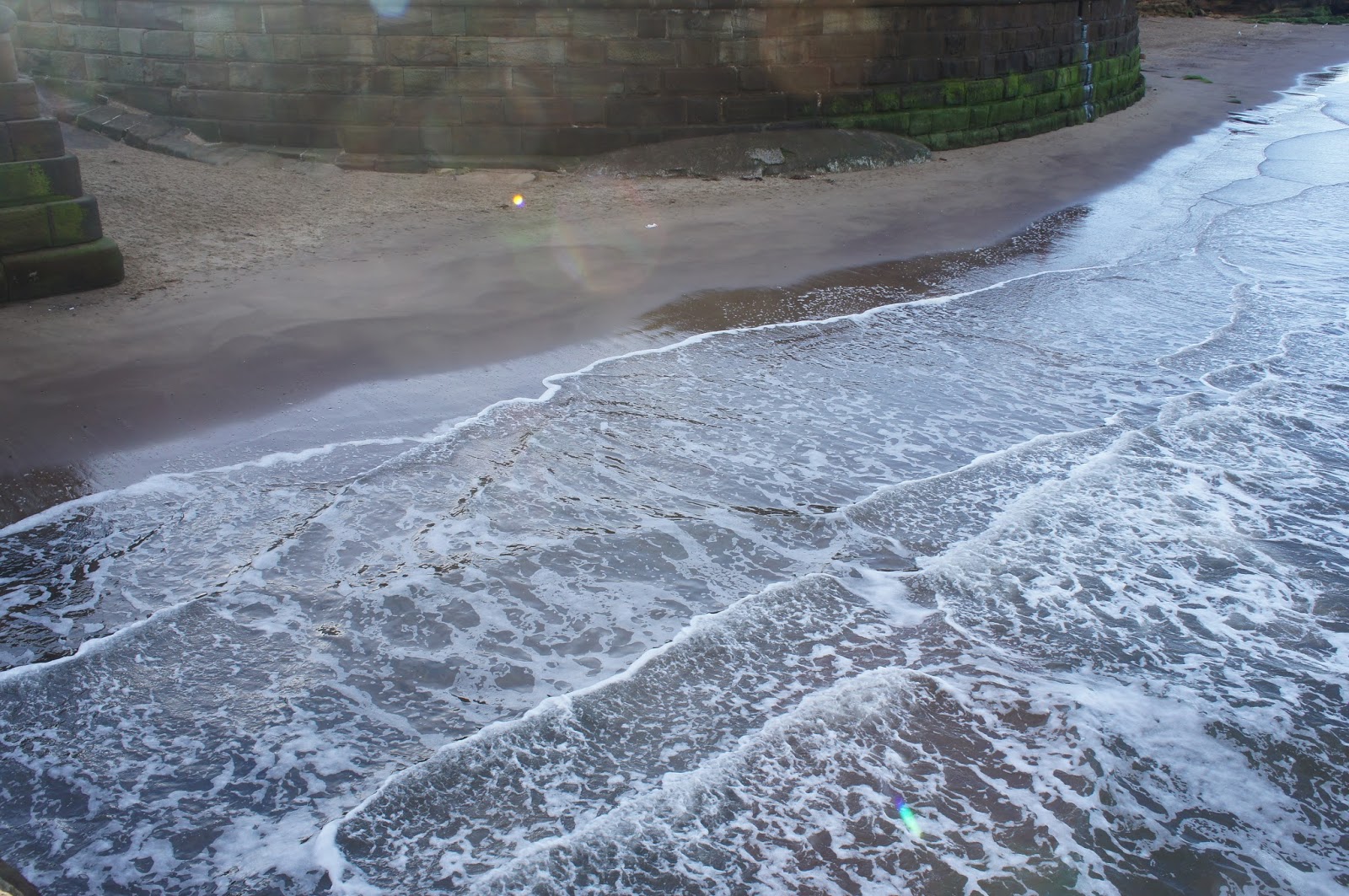 Walking up to the opposite headland where the statue of Captain Cook and the Whalebone arch is situated, I took this panoramic shot which I was really pleased with.....I haven't yet conquered the panorama function on my camera.

We decided to take the train back to York as it left a little earlier than the bus and we didn't need as much time here with the Abbey being closed.  The scenery on the train ride is some of the most beautiful I have ever seen in my life. Fields of pheasants (they were everywhere), sprinklings of snow, bubbling brooks and a deer or two amongst the trees.  I love this part of Yorkshire and could see myself living happily hereabouts for the rest of my life. Only thing is, my man is an Aussie with a sunburnt country running through his veins.