Three Castles and a Loch in the Mountains - Part 2

If you would like to read Part 1 about our Scottish adventure into the Western Highlands, click here.

After lunch, we were once again on the road and heading towards Kilchurn Castle (castle #2). The castle is only open to the public in the summer months so we would only get as close as a photo opportunity from the main road. This should of been a gorgeous photo but can you see what is wrong with it? 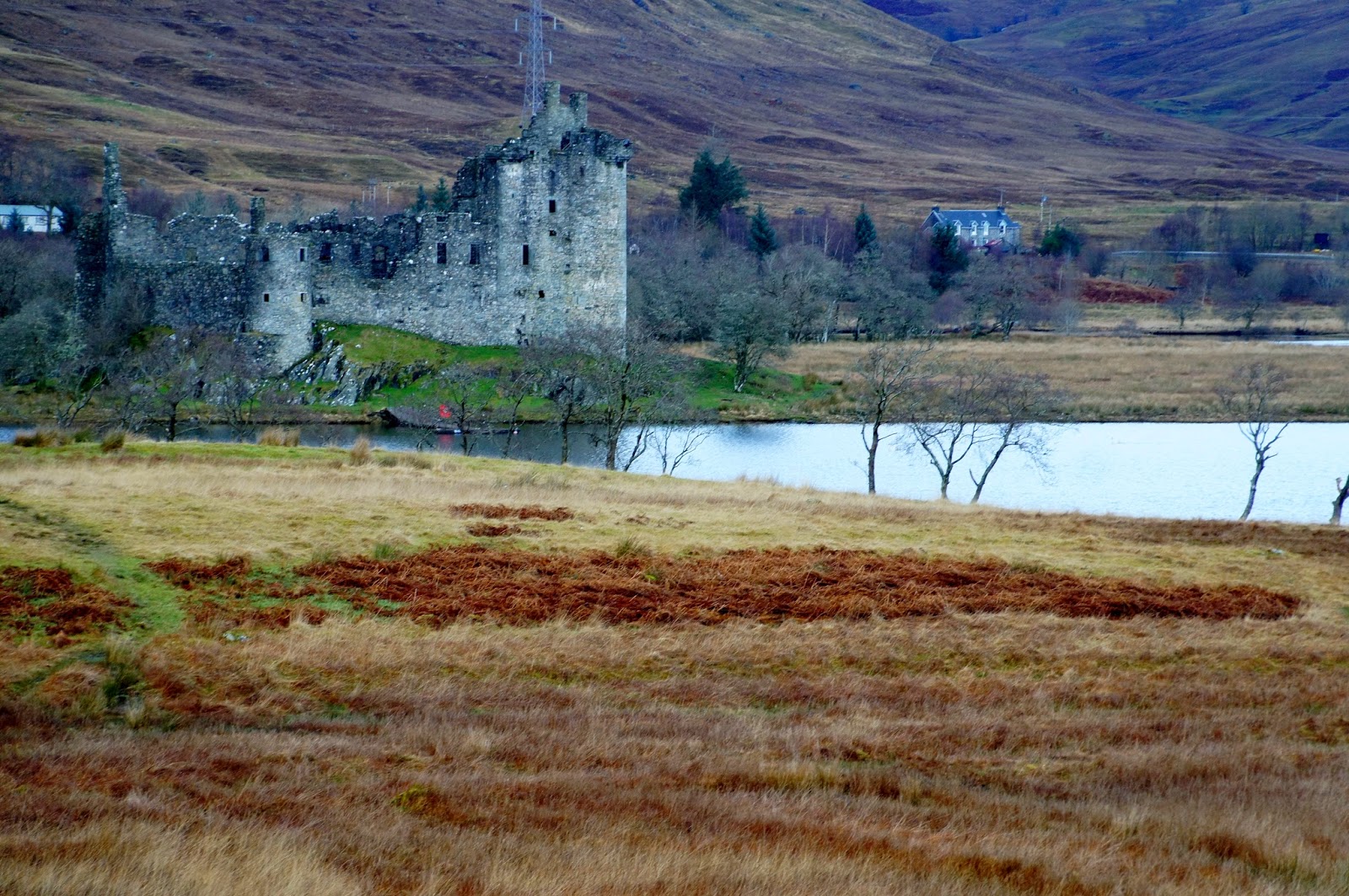 If you haven't spotted it yet, some ruddy power pylon has been planted in this gorgeous scene, right there behind the castle. Damn modern technology! There was no avoiding it, no matter which angle the photo was taken from.  The castle was originally built back in the 15th century on an island on  Loch Awe.  In Summer the castle can be accessed  by foot. I thought I would try out my Panoramic camera feature again.......but I still need some practise. See how I have chopped off the tops of the mountains. It gives you an idea of how lovely it is here though.

There was still plenty to see and we were heading for castle #3, Inveraray Castle, on Loch Fyne which is a sea Loch.  Inveraray Castle is just outside the very quaint village of Inveraray. Just look at those dark clouds rolling in. 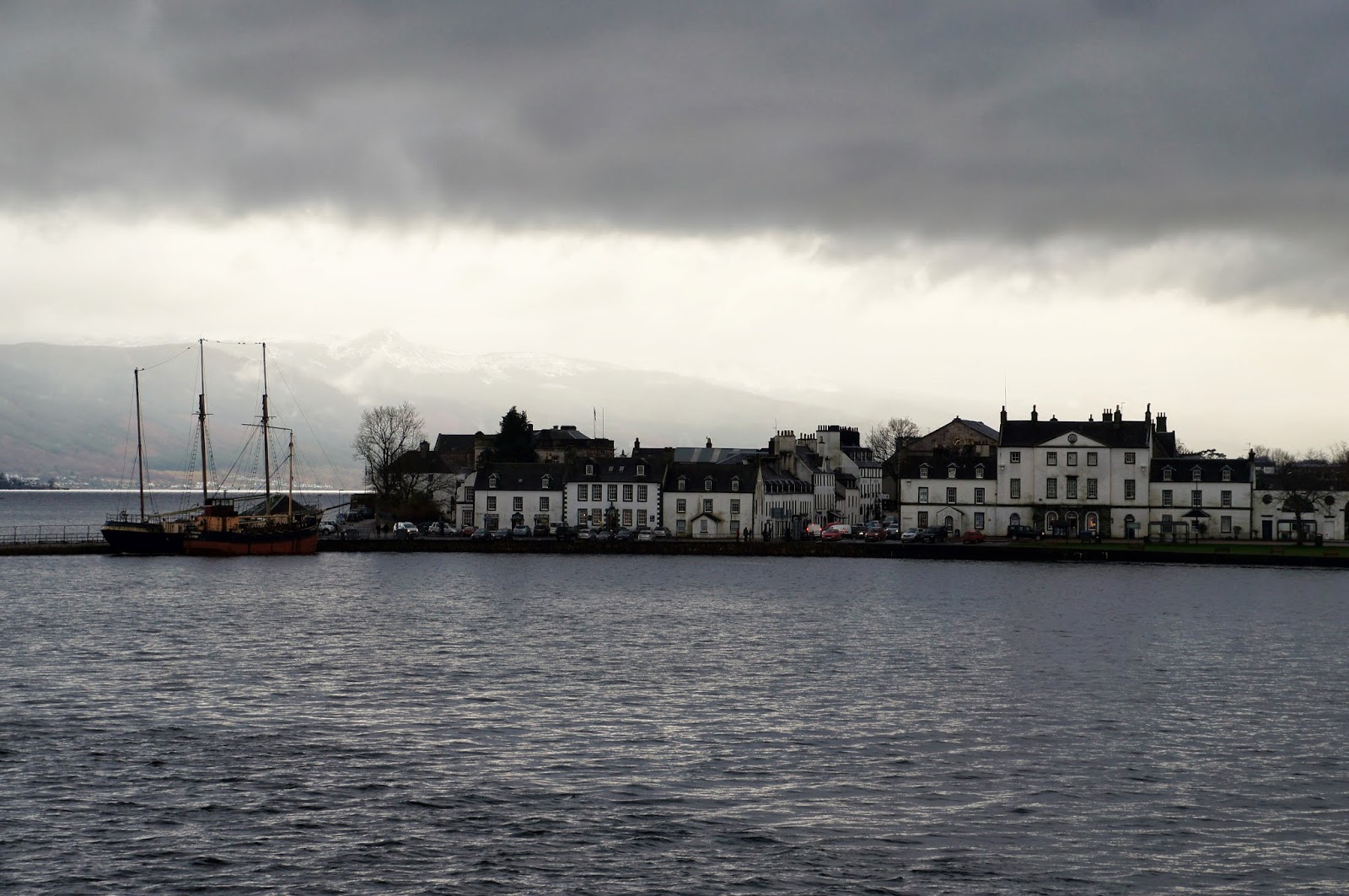 There has been a castle here since the 1400s but the current Invereray Castle was mostly built in the mid 18th century and parts rebuilt in the mid 1800s after it was detroyed by fire.  It is owned by the Duke of Argyle who is a Scottish Peer and one of the richest men in Scotland. He and his family were residing in the castle at the time of our visit so we were unable to call in.  Instead we were taken to a vantage point on a bridge to get a photo of this impressive Castle. 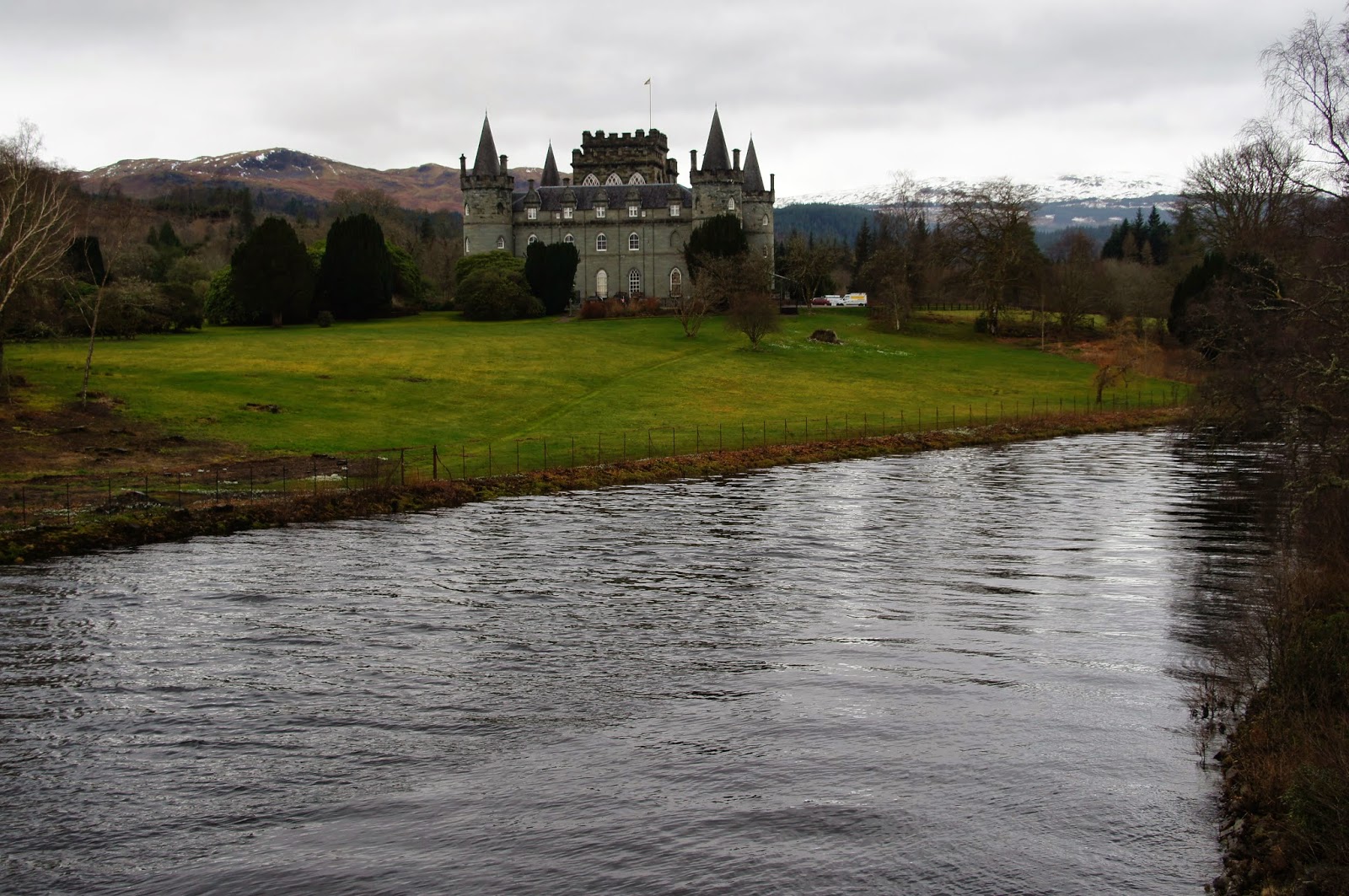 Here's something you might find interesting if you are a Downton Abbey fan....like me! This castle was used in the 2012 Christmas episode when the family went to Scotland to stay with their family at the fictional "Duneagle Castle". It was infact Inverarary Castle. 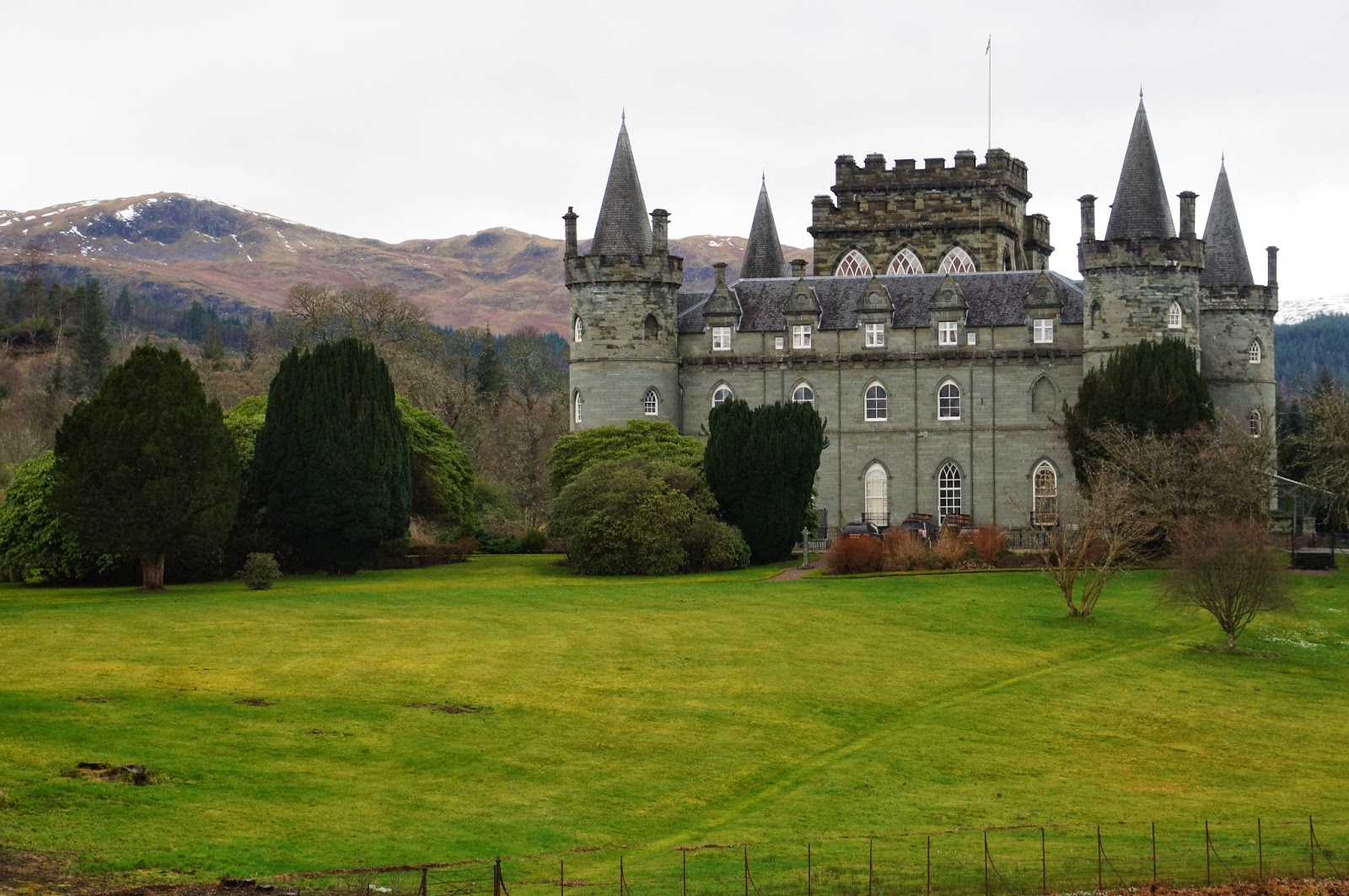 Our next stop was a place called "Rest and be Thankful" and Jaimie told us we could expect to see breathtaking views here as long as the rain and mist stayed away.  The road we were travelling on was originally a military road built at the time of the Jacobite wars in Scotland in order to move troups quickly.  The part we were travelling on runs from Invererary toward Loch Lomand across Glen Croe.  The men building the road were ordered to stop at the pass to rest and be thankful for the vista from that spot.
Jaimie told us that the road is locally referred to as Avalanche Road and judging by the water cascading down the sides of the mountains, it is not hard to imagine how soft the land must be and able to dislodge rocks and dirt. It was raining heavily again by now and I was not hopeful about seeing the beautiful vista we were promised at Rest and be Thankful. And here it is.....hidden by mist and rain.  Oh well, them's the breaks! Onward to Loch Lomand. 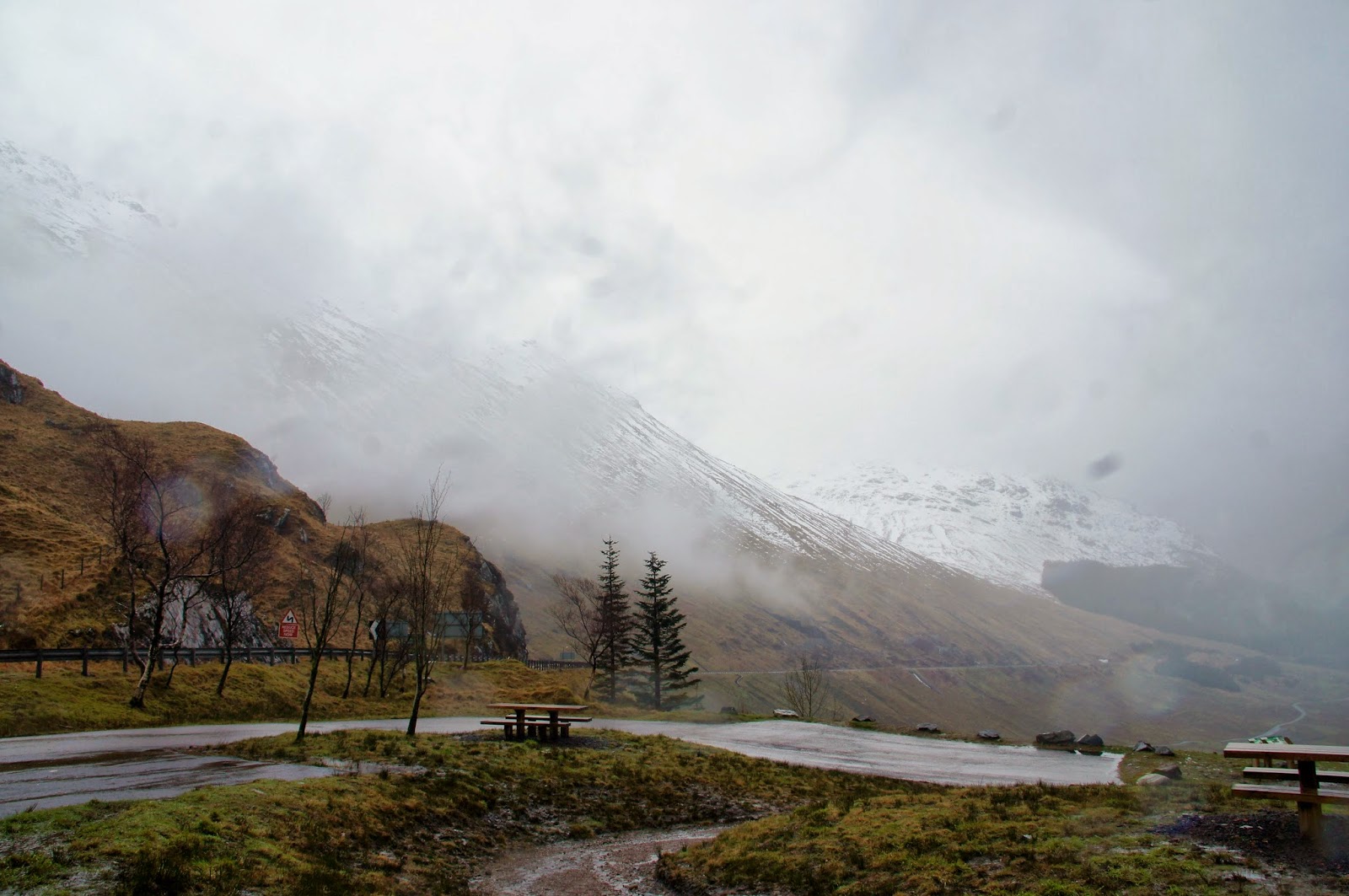 Loch Lomand, apart from Loch Ness, was the only Loch I have previously heard of and Jaimie reminded me why the name was familiar to me when he told us the tale of two soldiers from the Loch Lomand area who were taken prisoner by the British in the Jacobite Uprising in Scotland. One was let go and the other was to be executed.  The one who would die is the one singing the lyrics to the the song "The bonnie, bonnie banks of Loch Lomand". He is reminiscing about them being there again and how he will get there quicker on the low road of death but he will never be able to meet his love on the banks again.  Quite sad when you really listen to the lyrics.  I never knew the lyrics had this connotation.  Listening to the song, I really had goosebumps.  We were making our way back to Edinburgh now along the banks of Loch Lomand but it was raining quite heavily so I didn't take any photos. The trip back was very relaxing and we listened to a variety of Scottish music.....modern, not bagpipes.

Jaimie promised us one more photo stop if we could make it to Queensferry before the light completely faded.  He was going to show us the two bridges that cross the large expance of the Firth of Forth just outside of Edinburgh.  It was the last photo of a very enjoyable day.
Our viewing position was right in the middle of these two magnificent bridges so I had to take seperate photos although I would of loved them both in the same photo.

Tomorrow we would head to Essex to stay with my mum and Norman for a few days. The next post will be our return to London for the final week of our holiday.