"Oot and aboot" in Edinburgh

I woke up feeling very cranky on our 2nd day in Edinburgh and got very irritated by the fact that we couldn't find anywhere to have breakfast other than a greasy spoon. Uggggh!  I wanted porridge!......isn't Scotland the home of porridge?......why doesn't anyone provide it for breakfast? I hadn't slept well, my back was sore and I was COLD.  It really was a test of Miss M's patience and hats off to her for putting up with my 'like-a-2-year-old' tantrum. I needed her to take charge and she did.  She decided we would walk down into the new town and go to Pret for breakfast (We know that Pret sell porridge). Afterwards we would revisit the tourist information kiosk and look at booking a tour for the next day. Looking at the photo below, you would have to ask yourself "how could anyone be in a bad mood on such a gorgeous looking day?"

Following Miss M's decision, we ended up booking a Western Highland bus tour and then decided to spend the day exploring the city.  Firstly -  back up the mound towards Edinburgh Castle.'The Mound' is a man made hill extending from the Princes Street Gardens up to the old town. The dirt forming the mound came from the excavations of building the new town.  This all started in the 1700s and it was landscaped in the 1800s. Apparantly, it was a Loch before they started filling it in. Facinating! 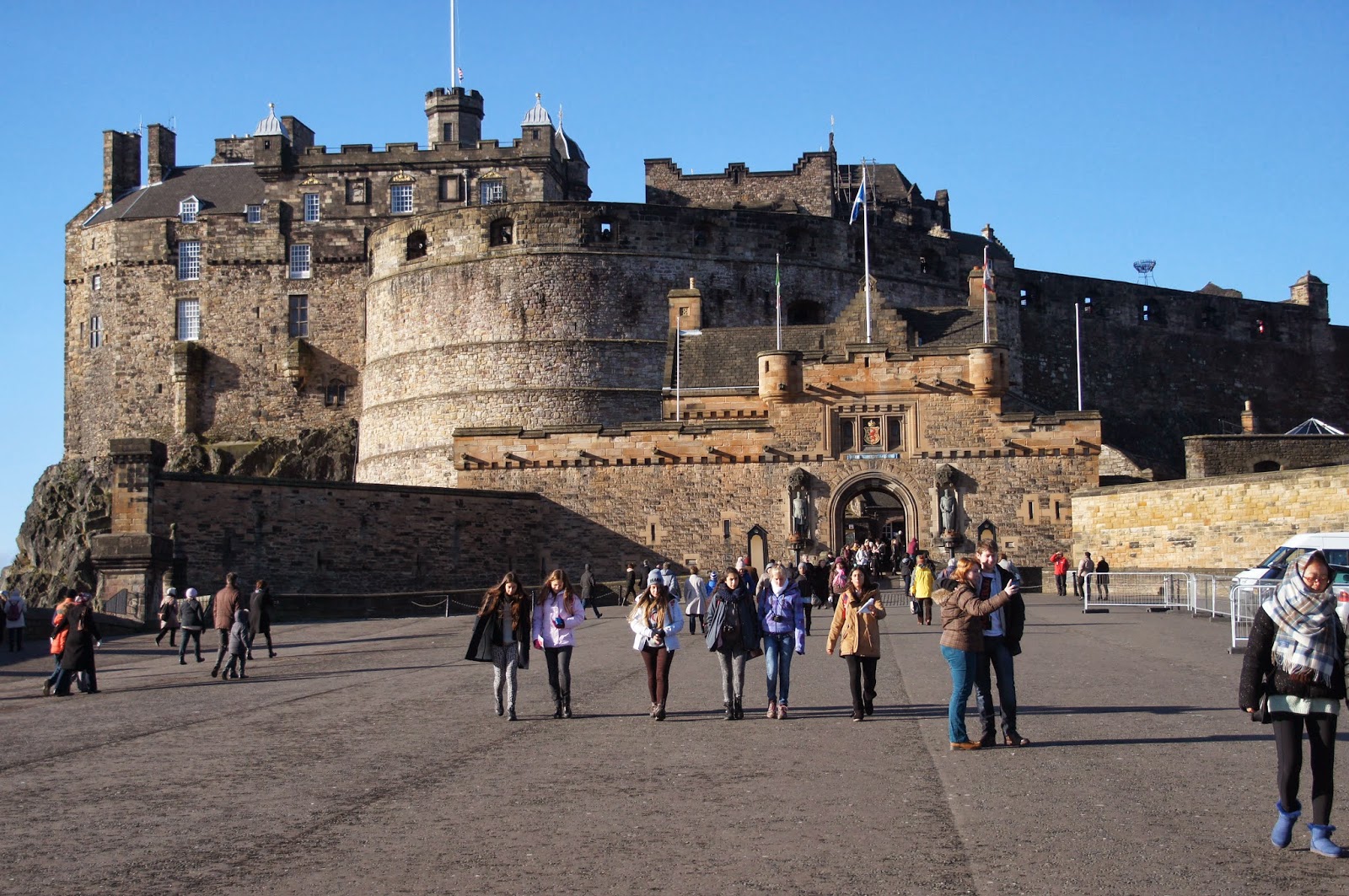 It didn't take long to scale The Mound and find the Castle entrance at the top of  The Royal Mile.  There would have been a time centuries ago when it wouldn't have been so easy to reach this spot.  The castle sits on a rocky crag to defend its occupants from invaders. 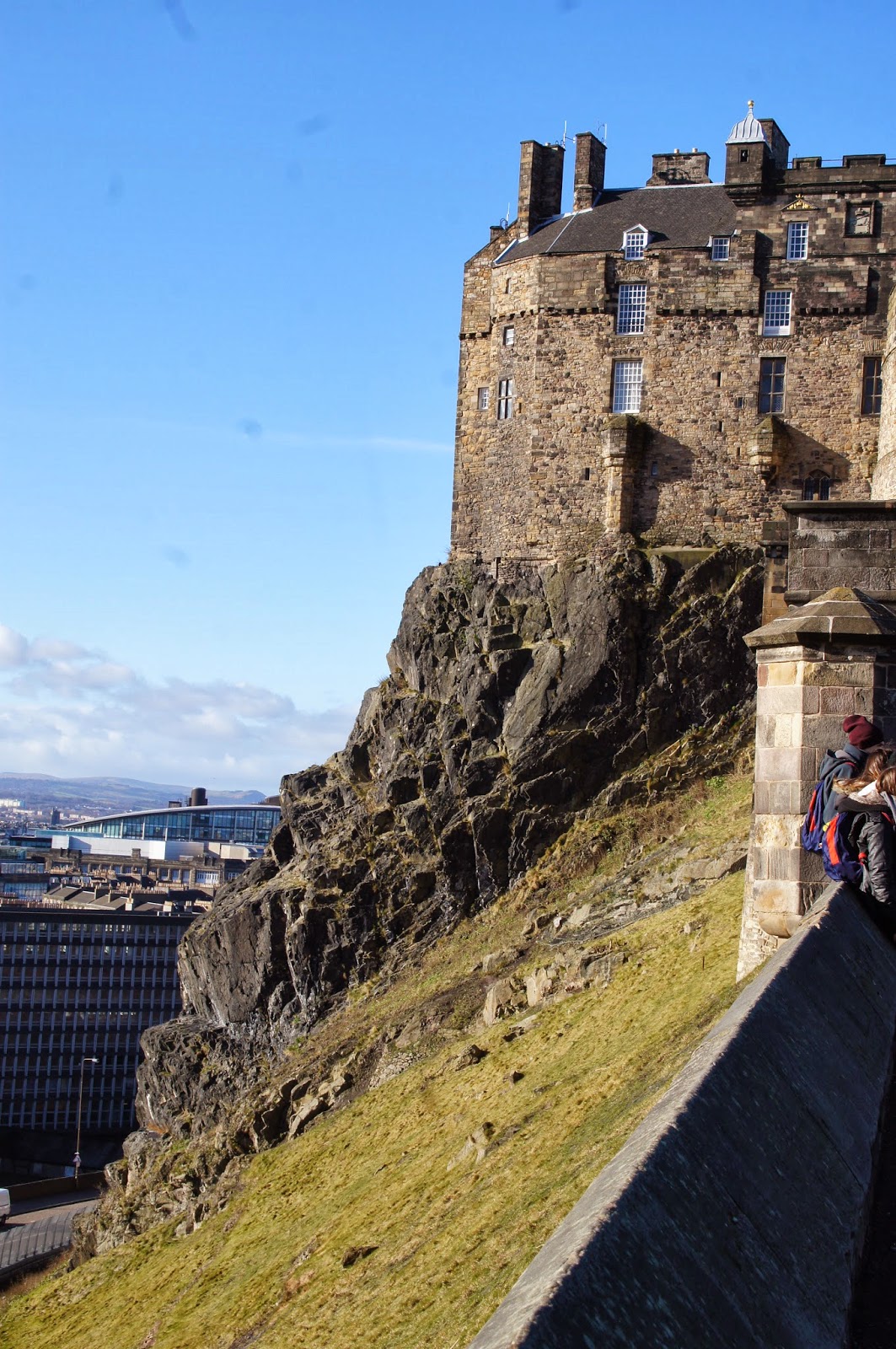 I was quite excited by this visit although I had no clue as to the historical story this castle had to tell.  My excitement faded a little when I faced the queue to buy tickets to get in here.  Remember, I was wearing my cranky pants today!!  My advise to you if you visit, PRE purchase your tickets.  It was the middle of February and we queued for at least a half an hour to purchase tickets and I thought they were a little expensive plus they didn't accept Miss M's student pass. Grrrr! We didn't take the audio either as it was extra.  Once inside we eventually found our way to the Royal Palace and followed the story of the Scottish Crown Jewels which are also known as the Honours of Scotland. The Honours have had a turbulant history being smuggled and hidden away from Oliver Cromwell's men for fear they would be melted down and then when the United Kingdom of Britain was formed in the 1700s, the honours were no longer needed and were locked away in the castle and forgotten about until they were again discovered in the 1800s.  Well worth seeing. The story is very interesting and the Crown Jewels are lovely. After that we had a look at the Great Hall with its magnificent timber roof. 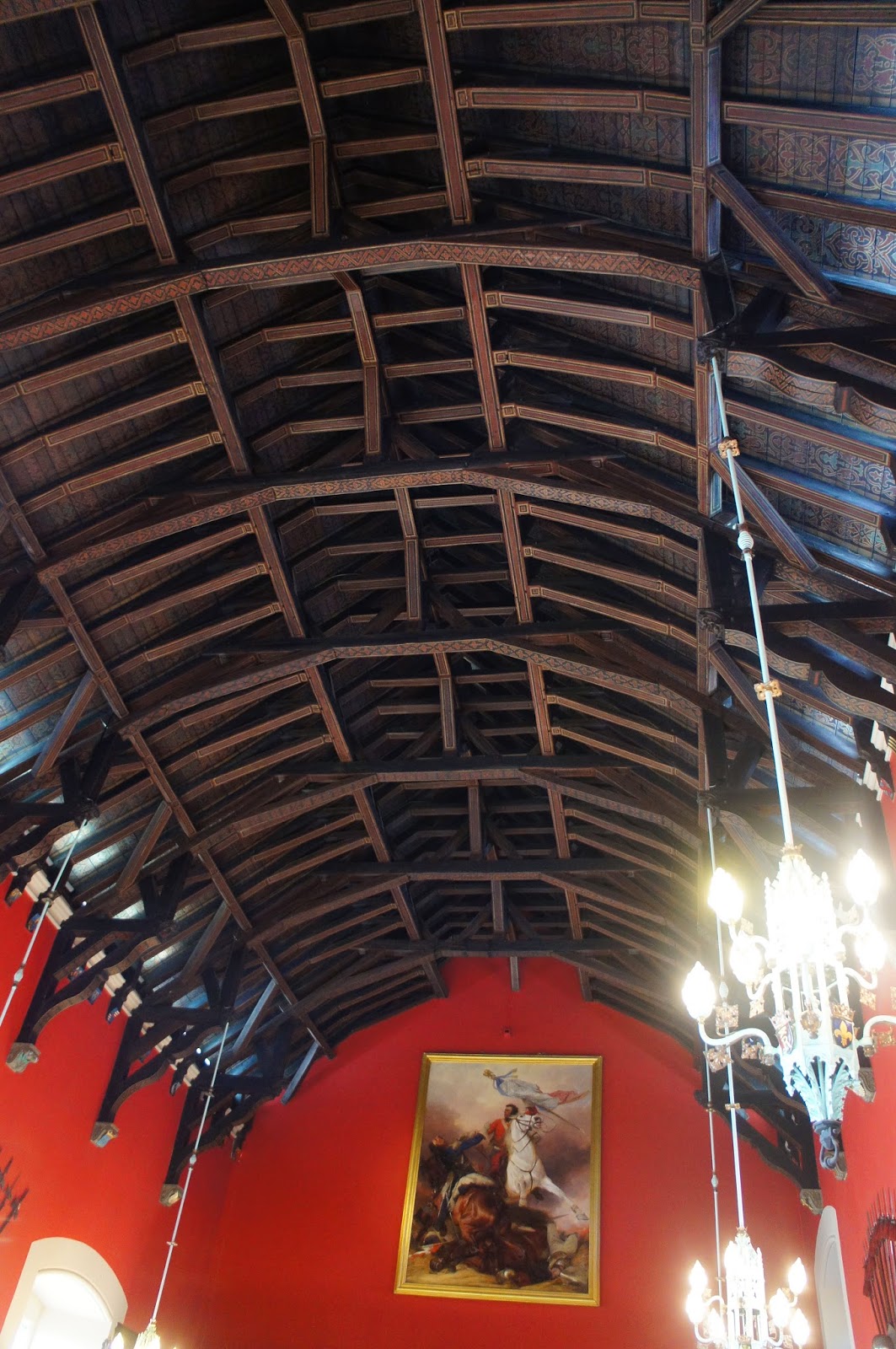 We took a peek at the dog cemetary and then because everything else was about cannons, regiments and the war memorial (not our thing), we decided to make our way out. We were hoping to hear the 1 o'clock gun go off but I realise now that they don't fire it on Sundays.....guess what day we were there? Before we go, I should show you the fabulous views from up here 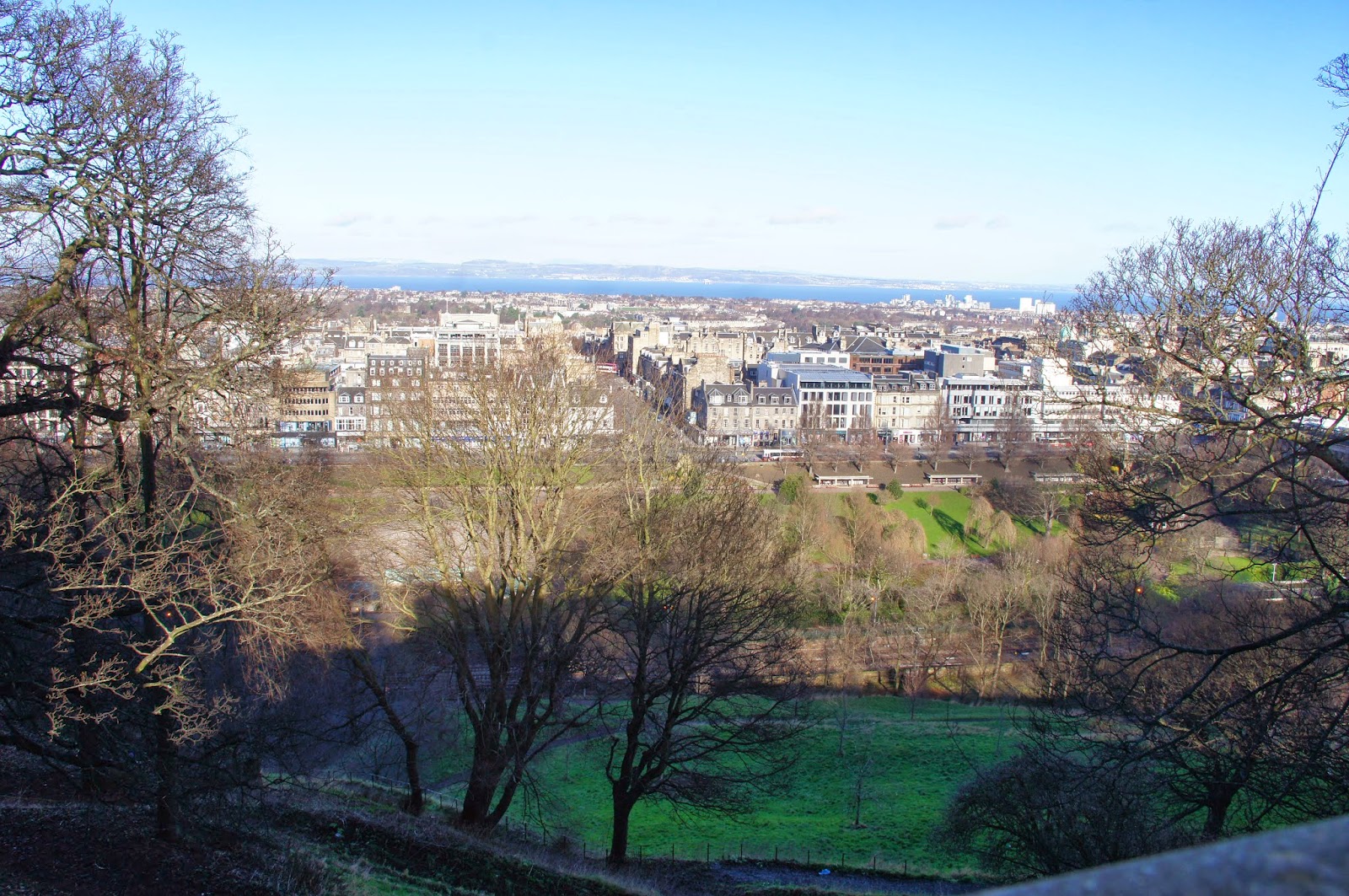 This photo is taken from the north-easterly facing castle wall looking down on The Mound, the Princes Street Gardens, the New Town and out to the Port of Leith and the inlet to the Firth of Forth. The next photo is looking down towards Holyrood Park and Arthurs Seat (the highest peak visible). that's where we were hoping to end our day. 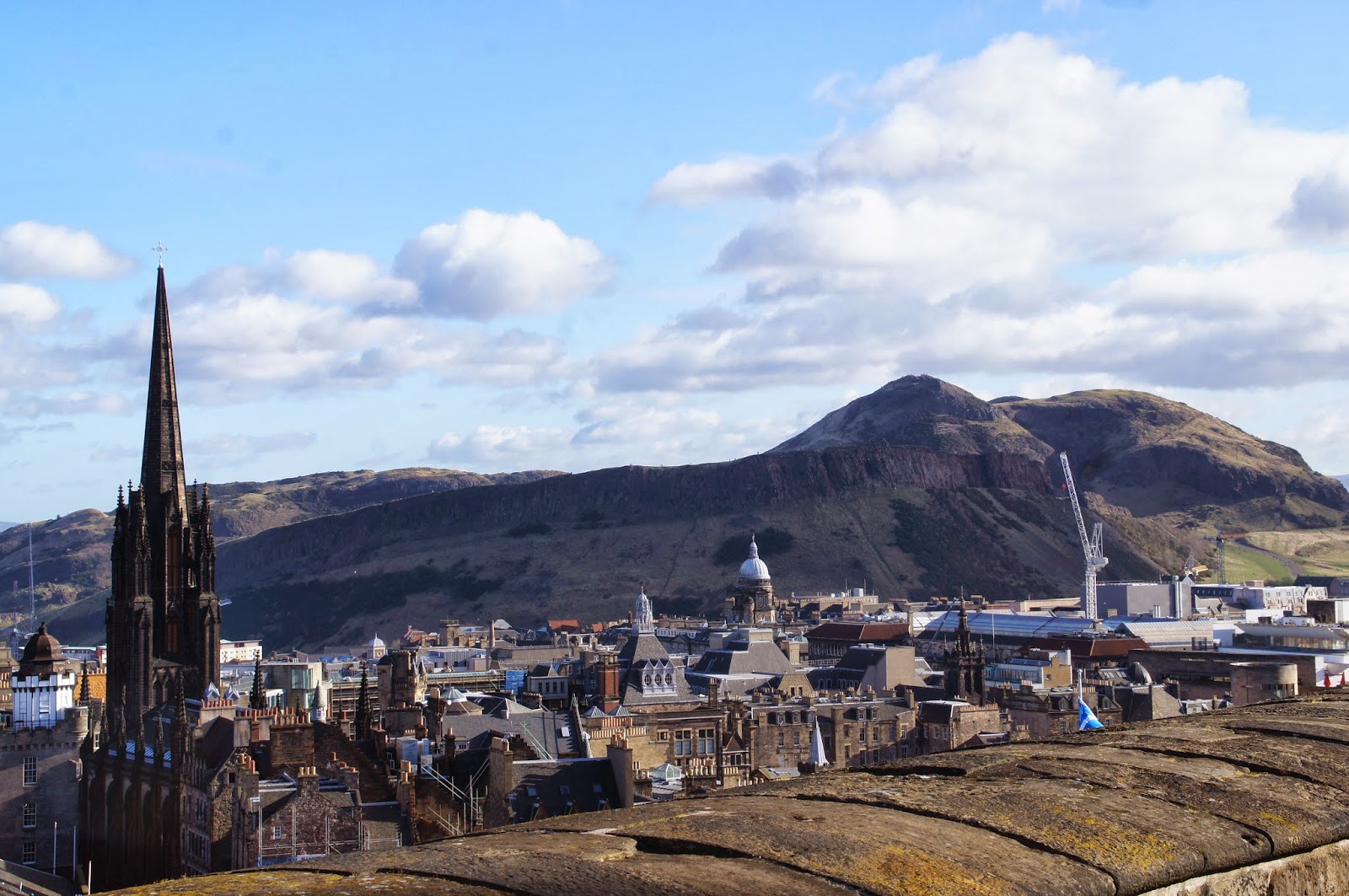 Leaving the Castle we followed the Royal Mile stopping in alot of interesting little shops on the way. I bought a cashmere tartan scarf each for my mum and her partner, Norman, who both celebrate their birthdays in February.

We stopped in at a tea room we had found the day before and had an early lunch.   You have to look for this place along the Royal Mile (near the Scottish Parliament Building) if you ever come this way. It is called Clarinda's Tearoom and it is a teeny tiny little tea room run by two lovely young ladies and is so homely and looks like granny's parlour.  They served homemade sandwiches, soups and other meals and had the most amazing trolley filled with homemade cakes, scones and slices......YUM! We both had a grilled cheese sandwich and something from the cake trolley.  As well as tea served in vintage teapots with mismatched cups and saucers. 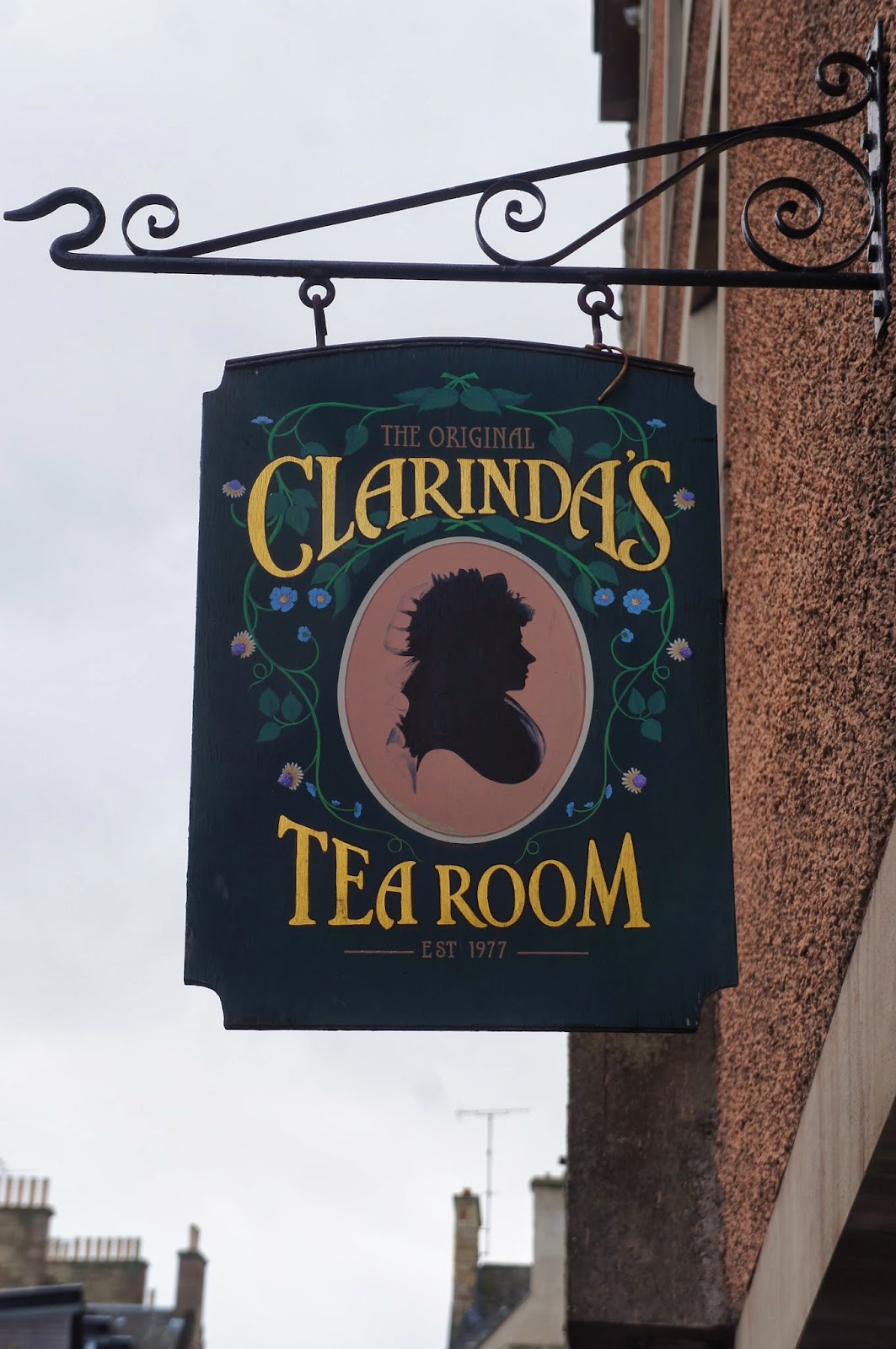 All warmed up after our lunch we continued our walk toward Holyrood Park.  Before we got there we found this very small building in a park just outside Holyroodhouse.  The previous day while we were on the bus, we found out that it was rumoured to be Mary, Queen of Scot's bathhouse! Very curious! 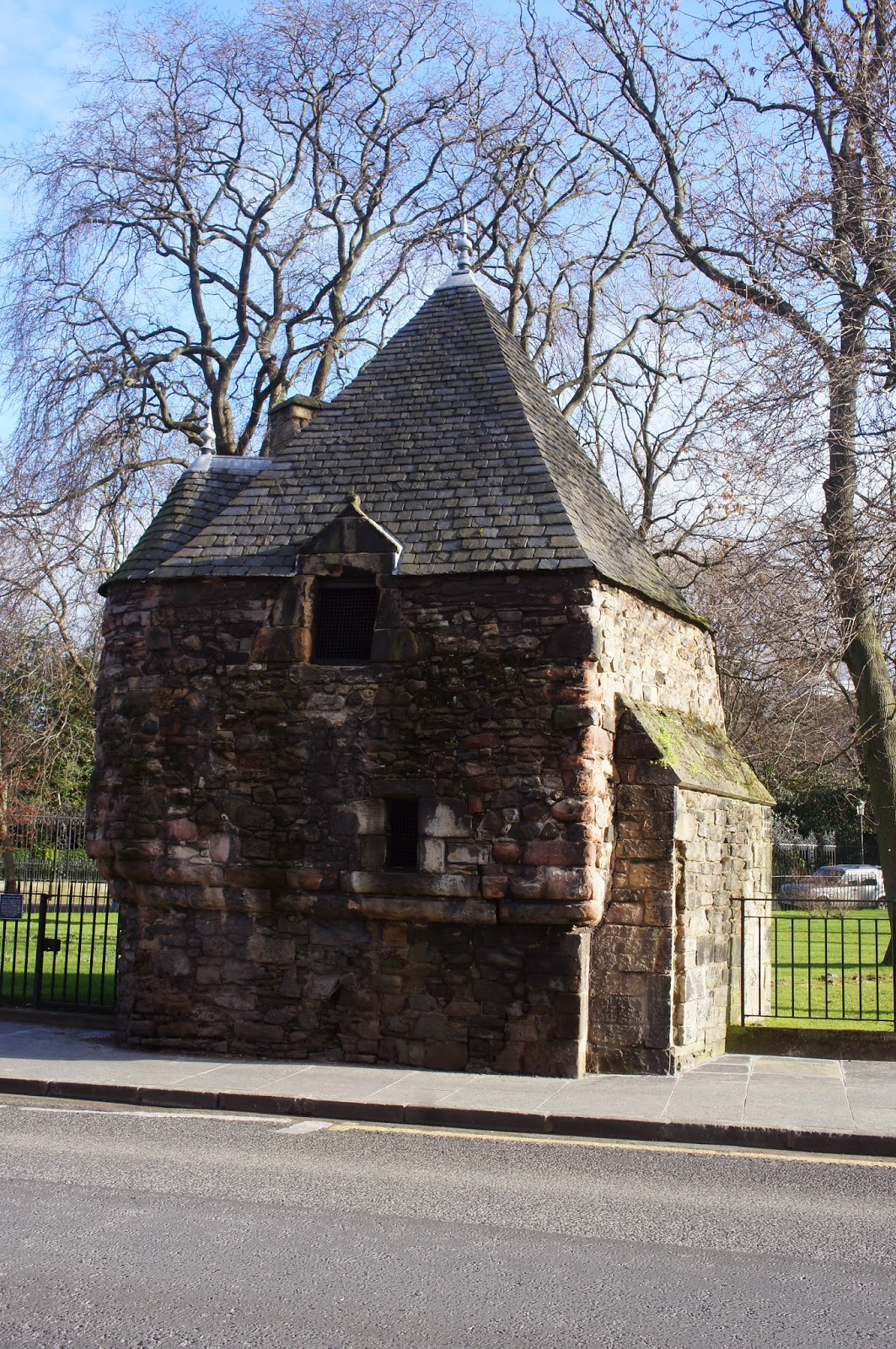 I was feeling in a much better mood about now and had packed up my cranky pants much to Miss M's relief (and mine - I hate being in a bad mood) and was very excited about walking up the hill.  Looking in this direction from Edinburgh Castle, you could clearly see alot of people on the hillside and on the ridge, walking up towards Arthur's Seat.  Once at the base of Holyrood Park, the number of people making the most of the good weather and walking out with their families and dogs, was suprising to me.  They are not really visible in this photo but they seemed to be dotted all over the hillside. I did notice that many of them were wearing wellies but I was undeterred and we set off on the paved path heading upwards at a leisurely walk. 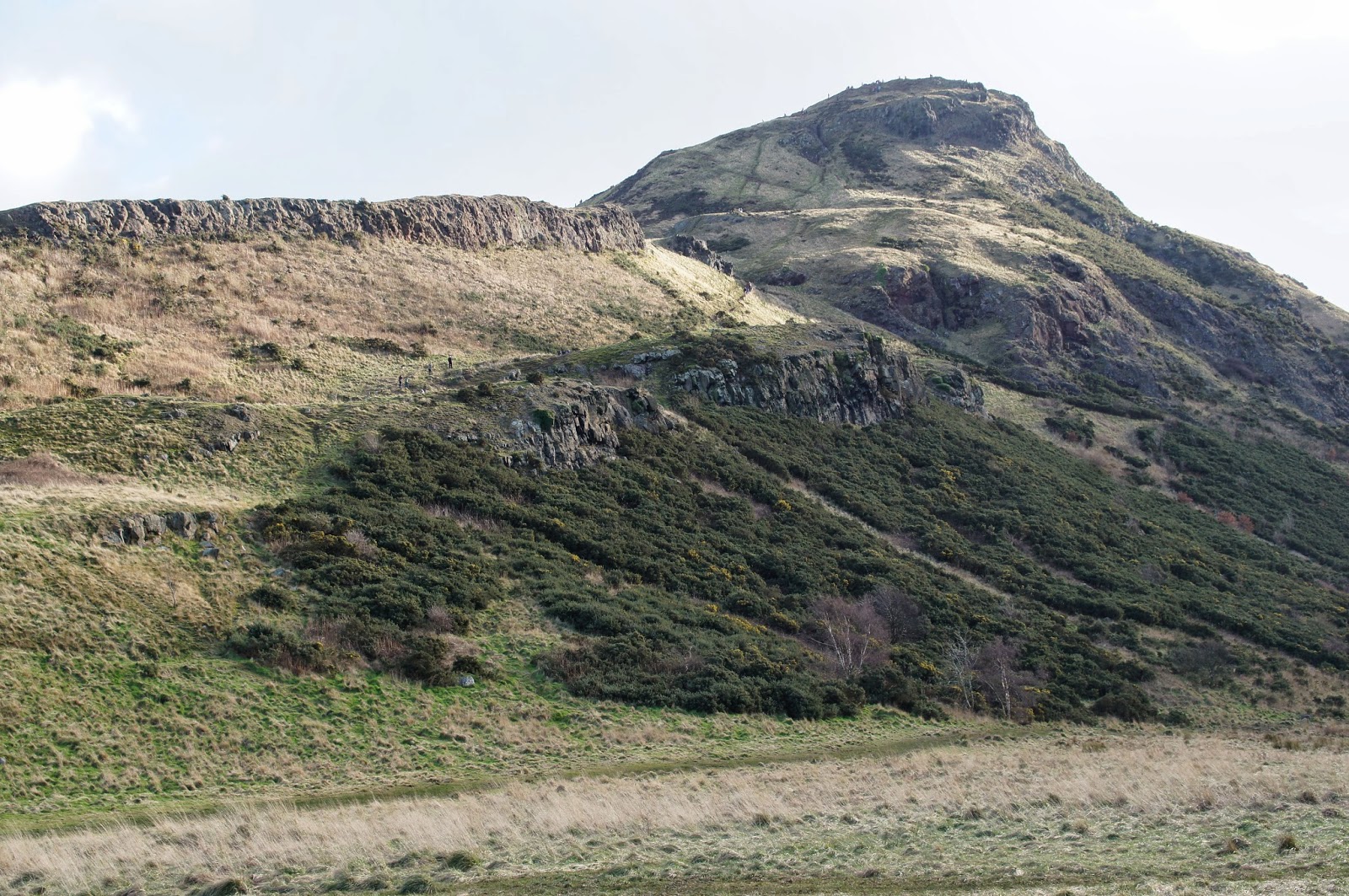 I saw it mentioned somewhere that you can walk up to Arthur's Seat in 30 minutes but once we got off the paved track and onto the dirt ones I realised why people were wearing wellies.  Very MUDDY is what it was.  Miss M was not keen on going any further so we just took some more photos  before ambling back down the gentle slope we had climbed.
This is the ruin of St Anthony's Chapel although I didn't know that at the time and looked it up on Wikipedia later.

We still had time to visit some of the free museums on The Royal Mile.  One of these was the People's Museum but we were disappointed to find it closed at 3pm on a Sunday afternoon so onwards towards the Museum of Childhood.  This was very interesting and rather creepy in some ways......I speak of the dolls room.  All those vacant eyes following your every move....made me think of a horror movie.

Leaving here we called into a fudge shop but they had just finished making a batch of fudge (bad timing on our part) and were not going to make anymore for the day so we bought a couple of fat wedges of fudge and continued on, finding the Christmas Shop a couple of doors further on.  Miss M found a couple of trinkets that she just had to bring home with her but I was not tempted.


It turned out to be a better day than I expected and I was really looking forward to the trip on the next day.