Three Castles and a Loch in the Mountains - Part 1

We woke up on day three to a rainy, cold day but I was really looking forward to seeing the countryside.  I couldn't exactly remember where we were going but I knew we were going to see some castles and lochs in the highlands so when the tour greeter asked where we were going, all I could think of to say was "to see three castles and a loch in the mountains". Apparantly he found this quite amusing and assured me we would see more than one loch and lots and lots of mountains. We were heading off to the Western Highlands.

We were only a small party and Miss M and I sat apart in the one seaters so we could each have a window seat. Lets face it, we had spent every waking moment together so far. A little separation was not going to get either of us upset. I was up front so I also had a fabulous view out of the front window of the mini bus as well.  One of the first sights was not any of the expected sights, but a rather beautiful, gigantic sculpture of two horse heads rearing out of the ground at the River Carron crossing.  These have only just been completed and the surrounds were not yet landscaped but I thought them absolutely beautiful.  Unfortunately I did not have my camera prepared to take any kind of photo at this point and anyway, we were moving quite fast on the freeway so I have scoured the internet to bring you this image to give you an idea of what they looked like. And I mean "gigantic"! 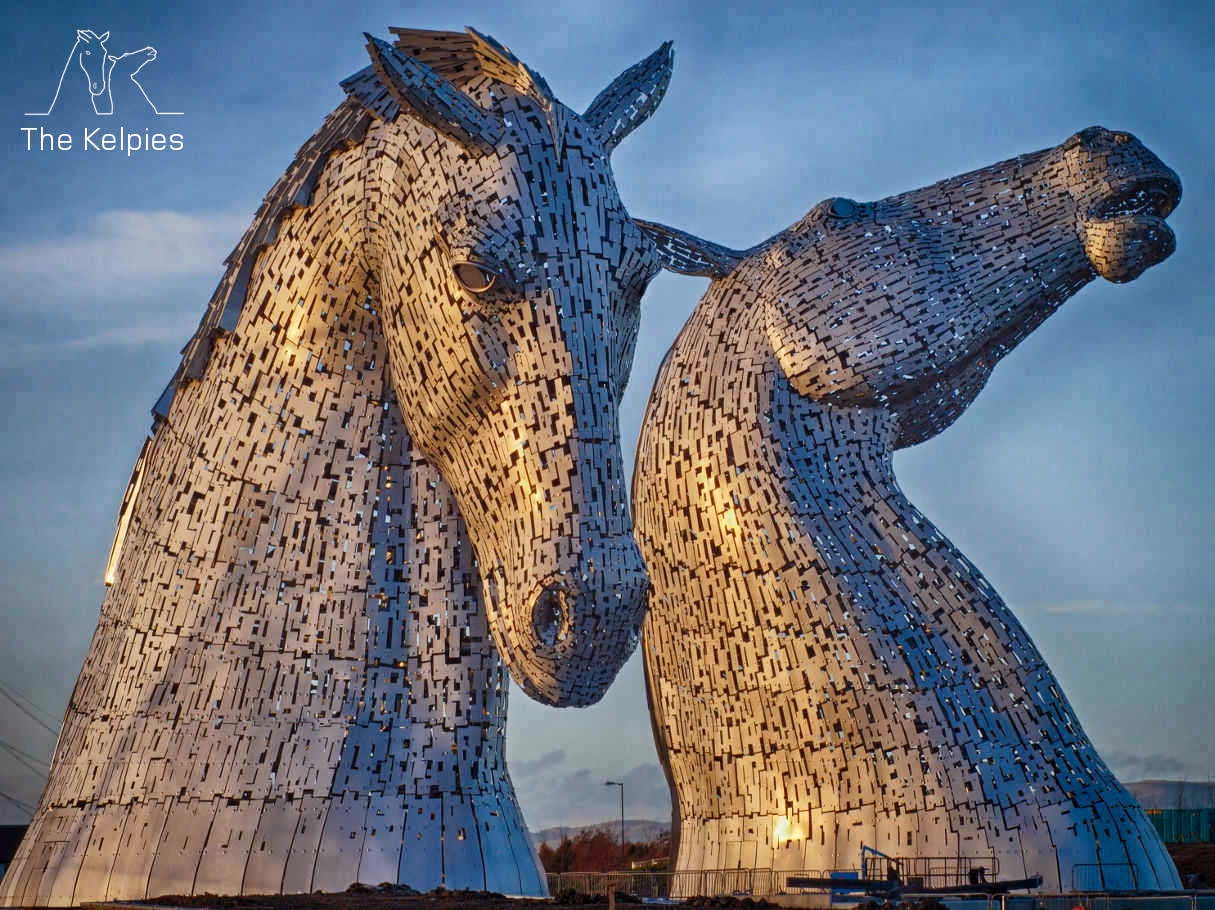 Our kilt wearing bus driver, Jaimie, promised we could stop at the base of Stirling Castle for a photo op as we were driving past it anyway so a quick detour would not make any difference to our trip and it was just a short drive from the Kelpies to Stirling.  Would you know it? as we were getting out of the bus, it started raining heavily. The photo I took was not very good but even so I wasn't disappointed that we were not going for a closer look. It doesn't look very castellated, does it? 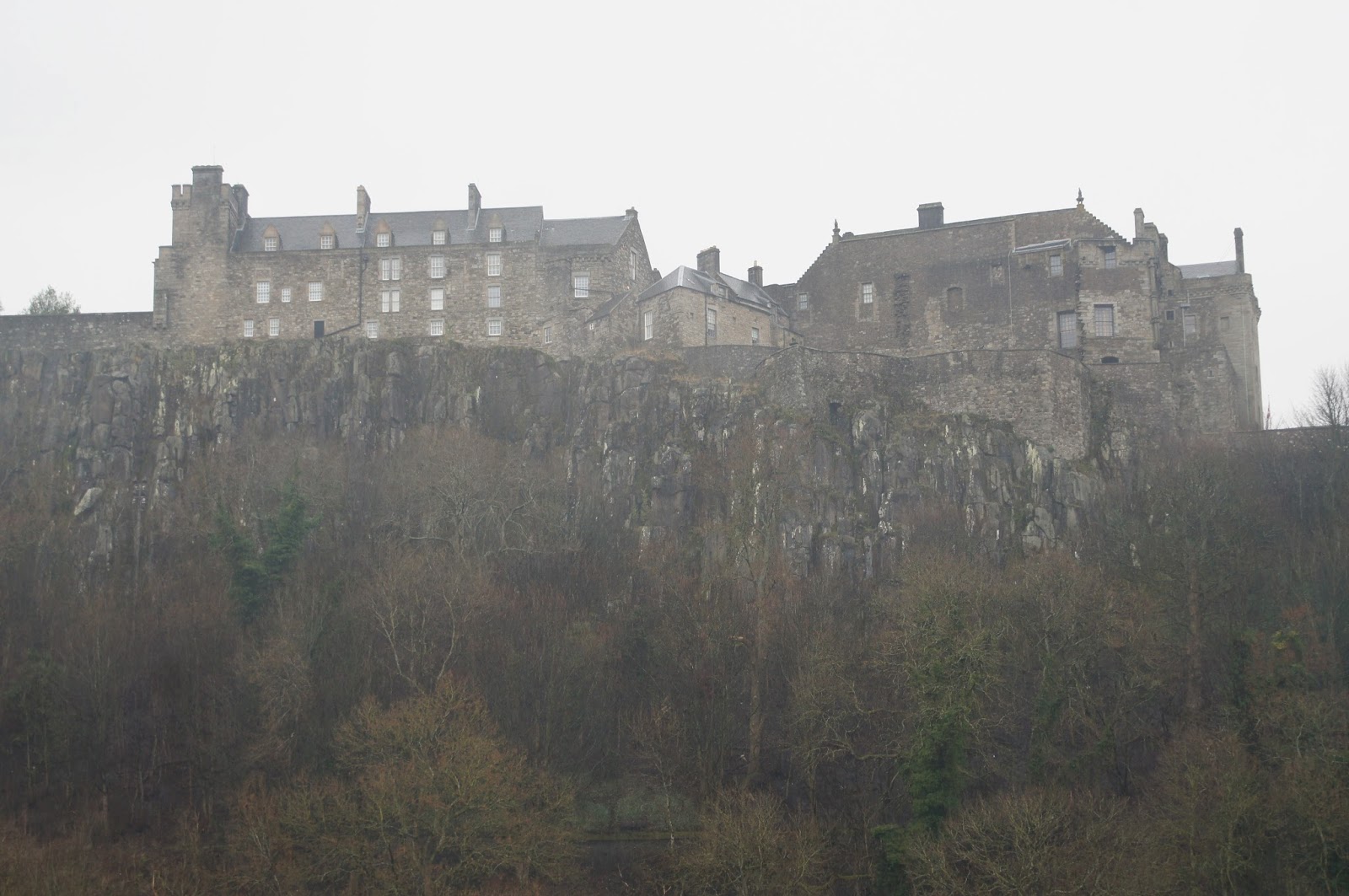 Luckily by the time we reached the village of Doune, the rain had stopped and I was glad because Doune (pronounced "doon") Castle was my kind of castle.  A little weathered and worn but still standing as it did in the 1400s making it easy to imagine what life was like here in those Medieval times. 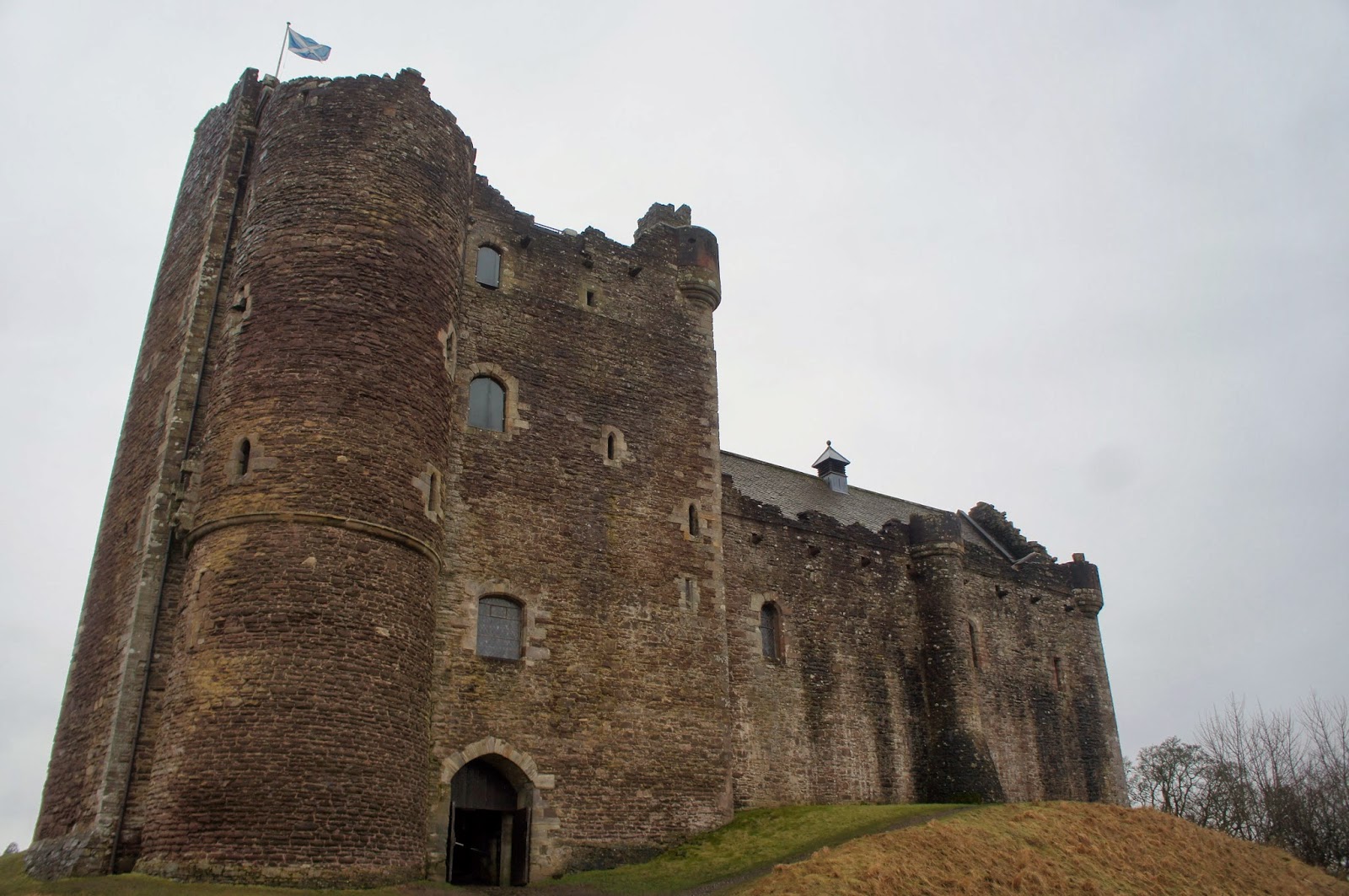 There may be a slight off chance that you think you have seen this castle before and if you are a Monty Python fan then you would be correct because this castle was used in the film "Monty Python & The Holy Grail". The audio commentry is given by one of the actors of that film, Terry Jones. 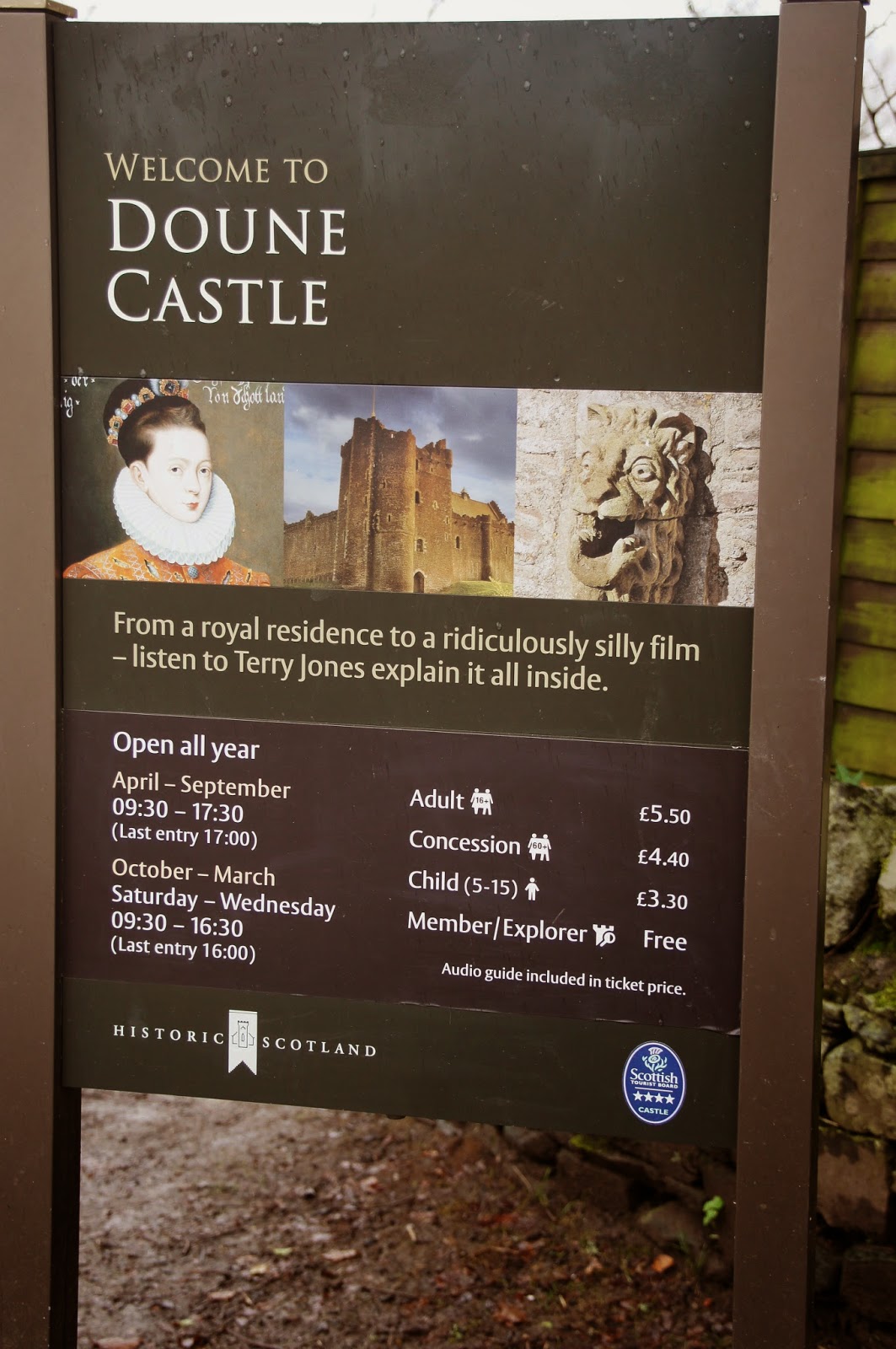 It turns out Doune Castle is quite a celebrity castle having featured in 'Ivanhoe' (1959) to the 'Game of Thorns' TV series (present day). Jaimie told us that they have recently been using the castle to film a TV mini series called 'Outlander'.  This is a series of 9 books written by Diana Gabaldon (I have read 3 books from the series already).  I suppose this is why the courtyard of the castle looks like a deserted market place at the time of our visit. 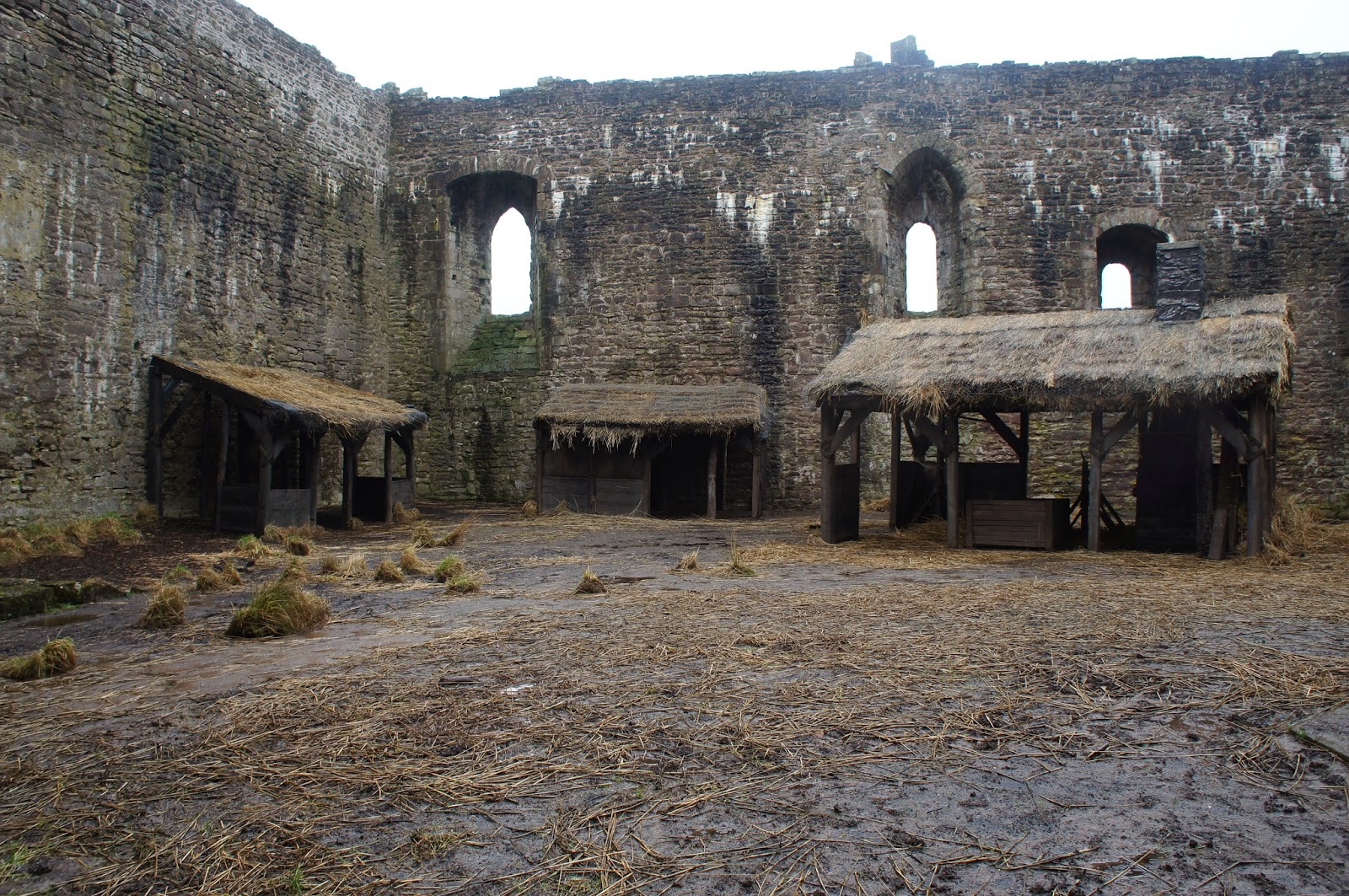 Inside, with the help of Terry Jones, we were able to explore the enormous kitchen, Great Hall and several other chambers. 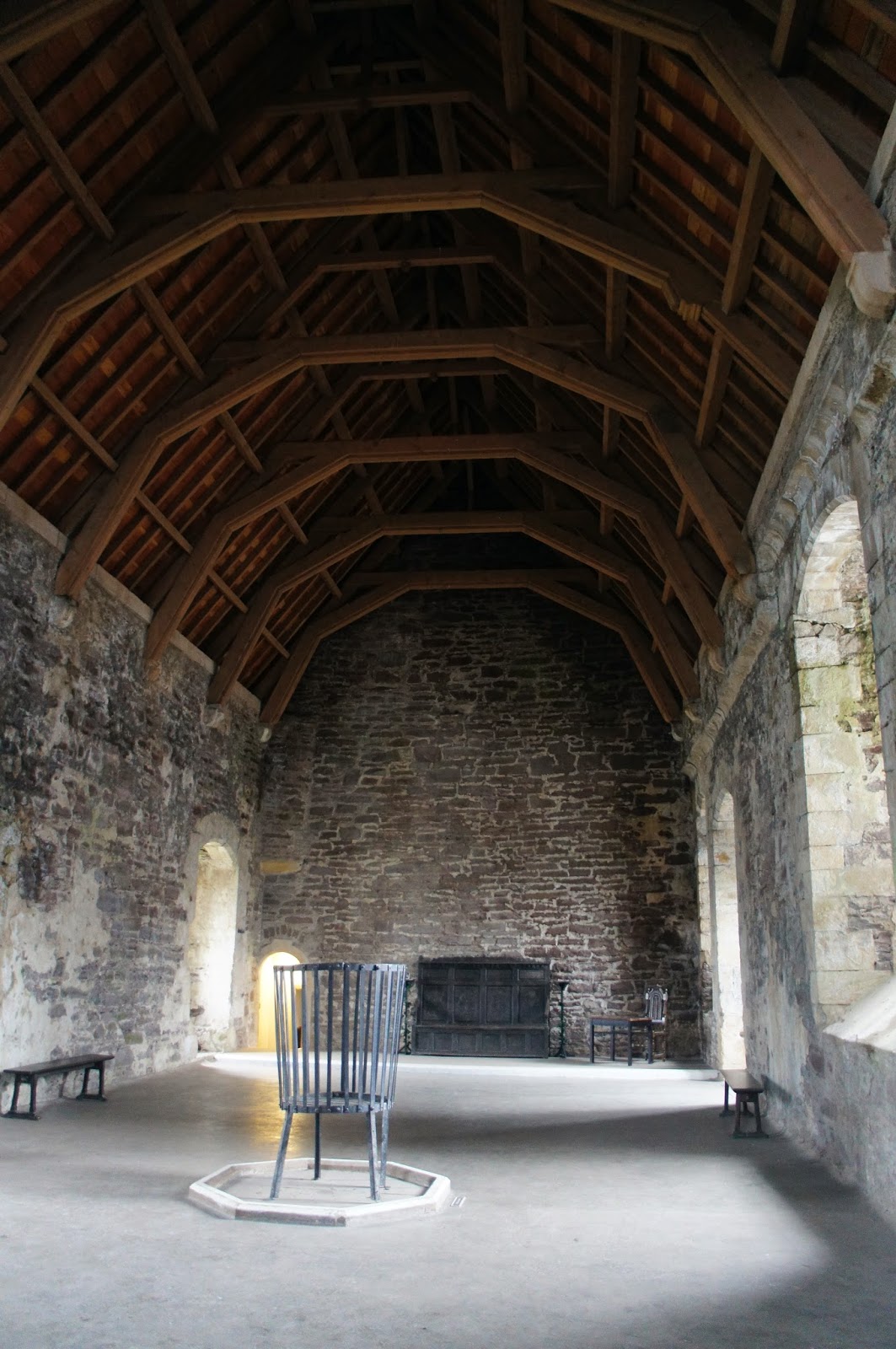 Other than the rest of our tour mates, there were no other tourists here at the time so we were able to roam around, listen to the audio tour and take in the ambience of the castle. Anita, if you are reading today, yes, I did touch the walls  LOL! 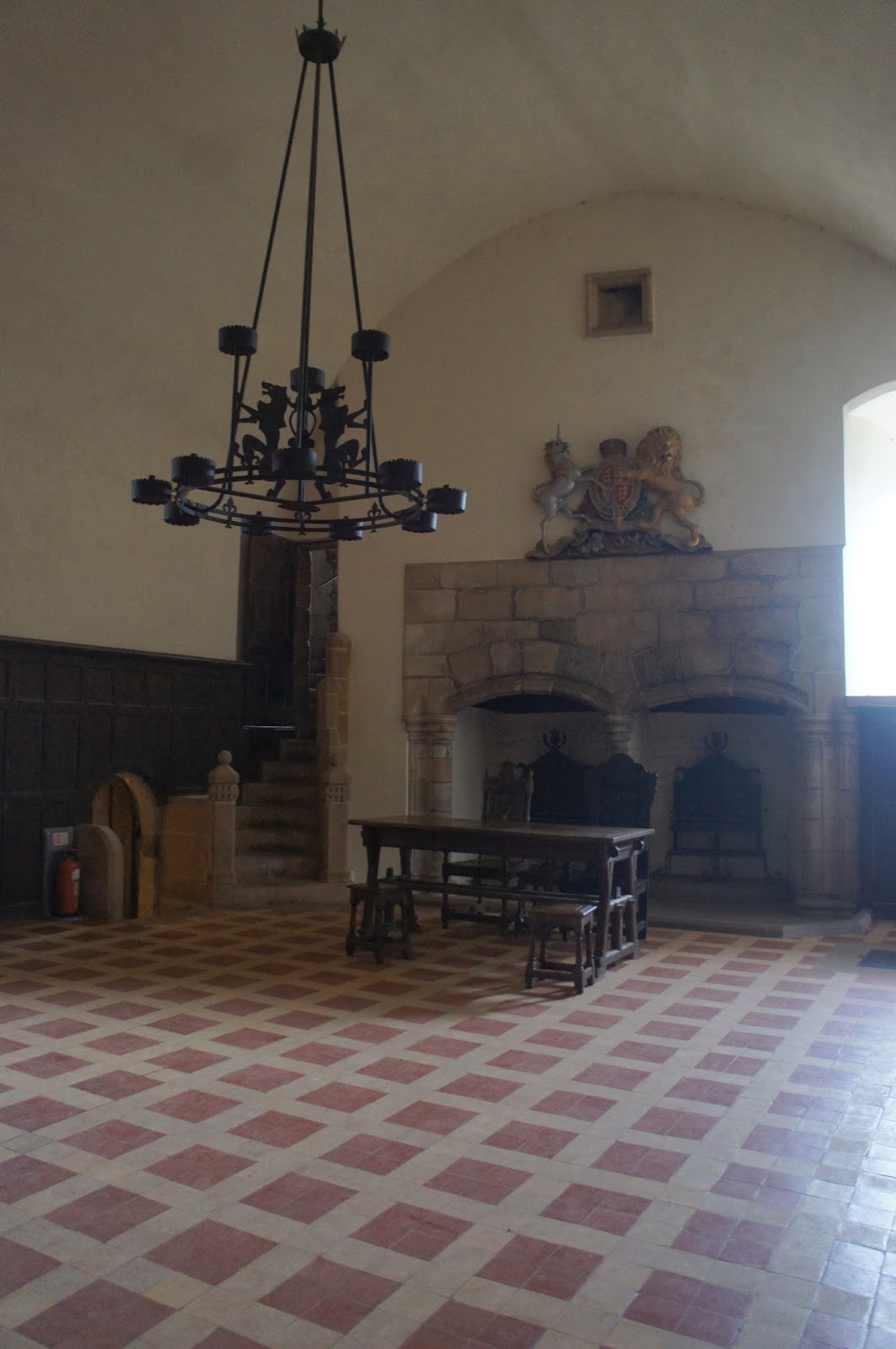 This chamber is the Lord's Hall and was beautifully decorated. It turns out that it was refurbished during the Victorian era and this is how Victorians imagined it would look in medieval times.  Those Victorians had such romantic notions.

We had a good hour to explore the castle and the only places we didn't go into where the bedchambers which were up some very narrow and steep spiral staircases which I decided I just couldn't manage. Coming back outside, I carefully avoided the worst of the puddles and muddy paths to take some more exterior photos and then a quick toilet break before heading to our next photo op. 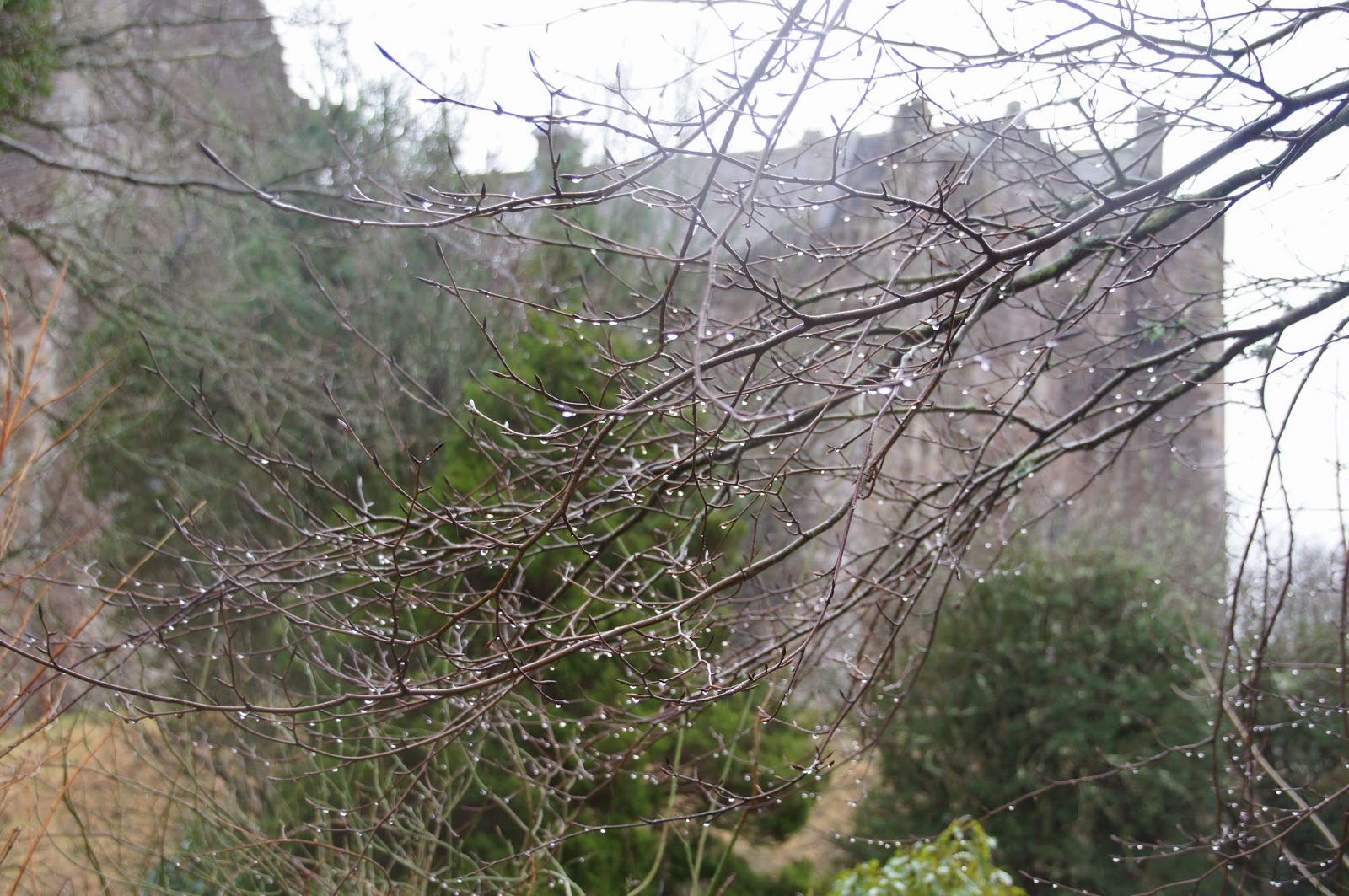 Leaving Doune, we started to head into the mountains which were topped with a blanket of snow.  This is Rob Roy country and also the feuding grounds of two of Scotlands most well known clans. The Cambells and the McKenzies and Jaimie kept us enthralled with tales of how these tribes lived and fought with each other over the years. Our next stop was on the banks of Loch Lubnaig which was just breathtakingly beautiful. The Loch was snuggled by snow topped mountains and the mist was rolling in as we stood there. 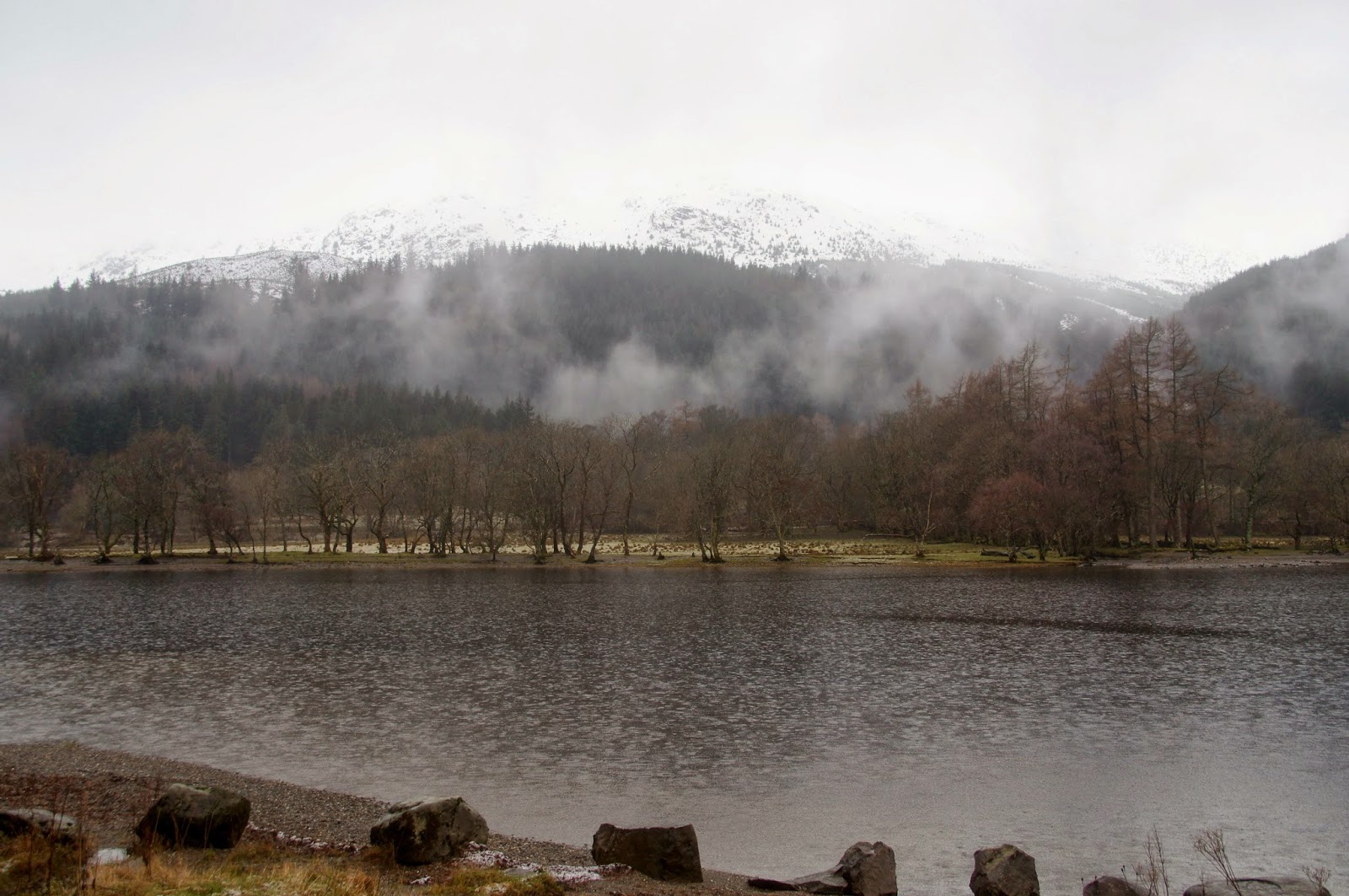 Back on the bus and listening to more historical accounts of the area and stories of Rob Roy, Scotlands own Robin Hood, we made our way through some of the most beautiful scenery. The snow was quite heavy in parts weighing down trees and mounding up on the roadside.  I was really hoping that when we stopped for lunch, it would be somewhere blanketed in snow. 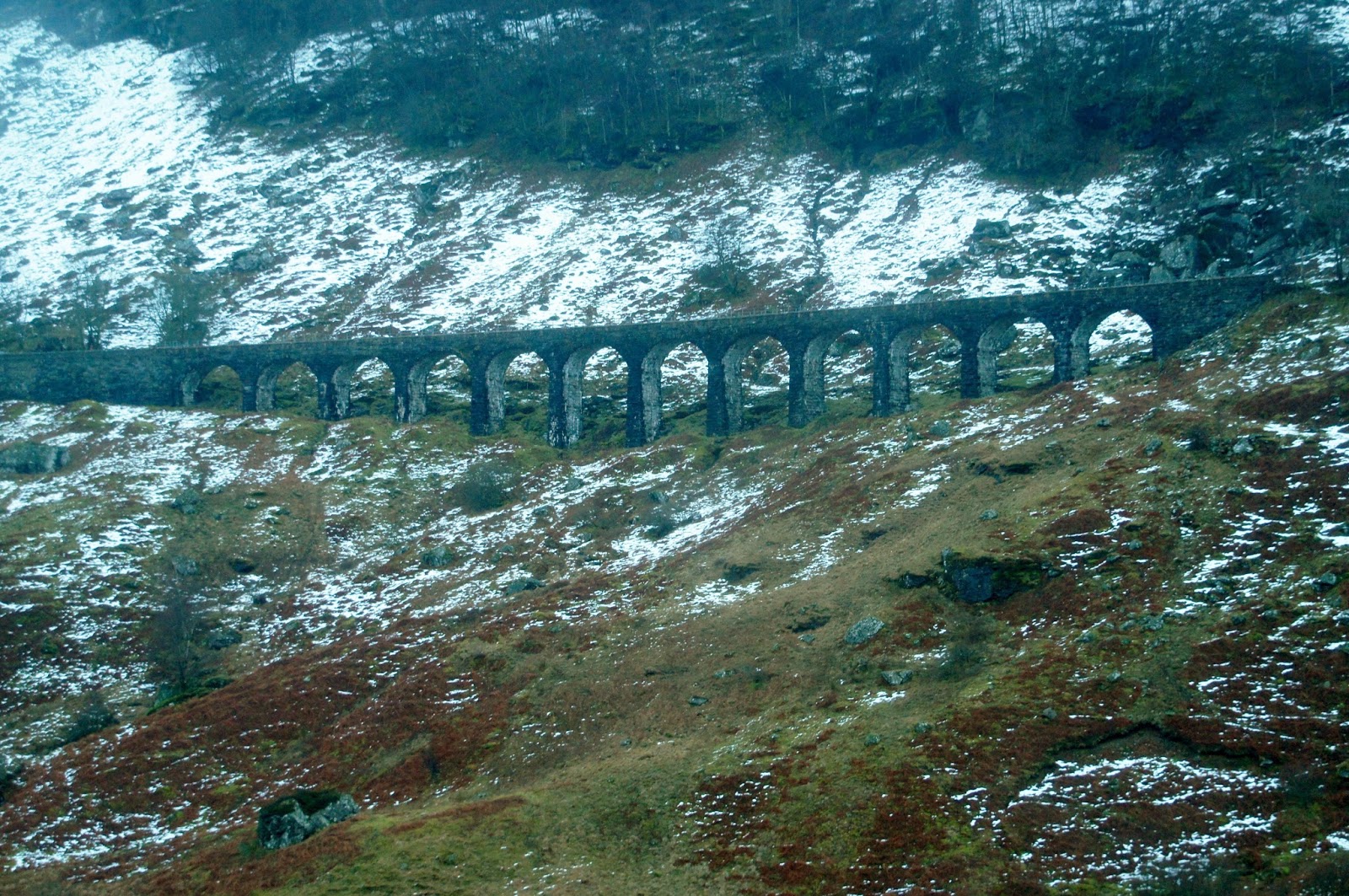 This is the only photo I managed to take from the moving bus and it is an old railway bridge on the side of the mountain which is part of a walking trail. The railway line is no longer in use.  it would be lovely in summer but it was not being explored today.

We reached the town of Tyndrum, where we were to have lunch at the Green Welly.  This was really the only let down of the day.  The Green Welly is a just a truck stop and a rather dismal cafeteria at that where the food was not very enjoyable and we ended up with a soggy sausage roll each. The other disappointment was that it was not as snowy as I had hoped.
I will take you deeper into the Western Highlands tomorrow - If you care to accompany me.