This weeks Tuesday Treasures is a thing, a person or a place.

I thought I would dedicate this weeks Tuesday Treasures to the woman who taught me how to quilt.  I met Averil in 1999 when another friend mentioned she was taking quilting lessons and asked if I wanted to join her.  As patchwork and quilting was something I had always fancied doing, I jumped at the opportunity.

Averil had already been quilting for 30 years when I met her and was the most patient and generous person I have ever met. She ran at least 7 groups a week in a shed at the back of her house and certainly instilled in me the love of quilting. Averil had a blood disease and often had to find time to visit the doctor although she never cancelled any of her classes until her husband, Vince, had a heart attack and ended up in hospital.  He recovered and and promised Averil, he would stop smoking and eat healthier but the stress was too much for her and a few weeks after he came home, she had a stroke.

She never recovered from the stroke and passed away a couple of days later. I will always remember Averil.  She taught me so much in the few years that I knew her and imparted so much knowledge. The group of girls that I was in continued to meet after she died and called ourselves "The Kelly Girls" (Named after Averil's Street) We found a venue (infact several over the years) to meet every week and are still meeting every Monday. I am no longer a member due to my work committments but I do have my quilts to remind me of Averil. The little quilt below was one that Averil made and I bought it when her family sold the contents of her shed. 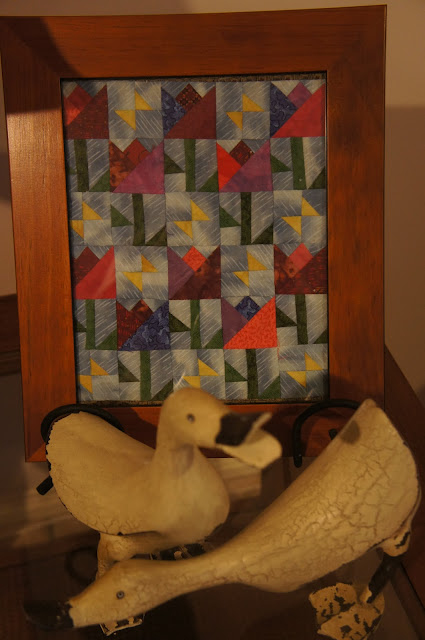 And that is my Tuesday Treasure.