I have been to Dover before and even though I don't think much to the town itself, they do have a great castle and a fabulous wartime history tour. Today, however, we were just stopping here for some lunch.   We were quite lucky that because it was a bank holiday, we made really good time travelling there and were taken to the war memorial ontop of the white cliffs ......for a quick look. 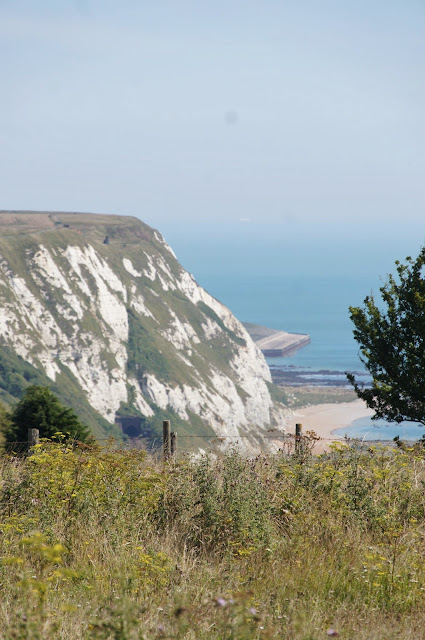 Would of been nice to stop on the cliff tops for a picnic and even a short walk but that was not on the agenda. After lunch in Dover itself, we took the tour guides advice to walk to the "beach" (if that is still what you call it when it is pebbles instead of sand) take our shoes off and paddle in the waves.  I wanted to walk to the waters edge to take a photo and since I was wearing slip ons was forced to take them off because I kept getting pebbles stuck in them. Let me tell you now......never walk barefoot on a pebble beach....OUCH! 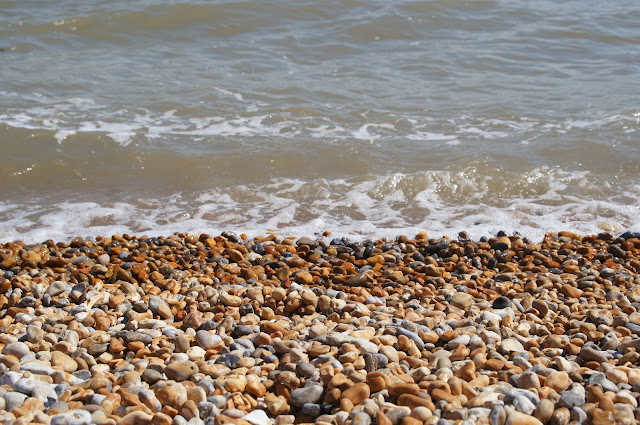 Back on the bus and heading for Cantebury I started to feel really yuck.  A migraine was making itself felt and I really should have taken something there and then but I didn't have anything and I didn't think to ask Red. I probably would have enjoyed the trip to Cantebury more if I didn't feel the need to lie down and have a bit of shut eye.

This is what I know about Cantebury Cathedral, even before visiting it. In the 6th century, the pope noticed two blonde slaves in a Roman market and he was told they were "Angli" (from Anglia or England). He mistook this as meaning Angels from God and it reminded him that Anglia was a godless country.  He made it his mission to bring them back into the fold and sent an emissary to convert them. The king at the time was called Ethelbert of Kent and although he was no Christian, he dearly loved his Christian wife, Bertha, and would do anything to please her.  It was due to her that he agreed to a church being built at Cantebury which is now Cantebury Cathedral. So, you could say that Cantebury is the birthplace of Christianity in England and also explains why the highest religious order in the land is known as the Archbishop of Cantebury. Of course there is a great deal more to the history of this magnificent building including the scandelous murder of a priest (Thomas Beckett)and the dissolution of the Catholic Church having an effect here as well but I like the story of Ethelbert and Bertha most. 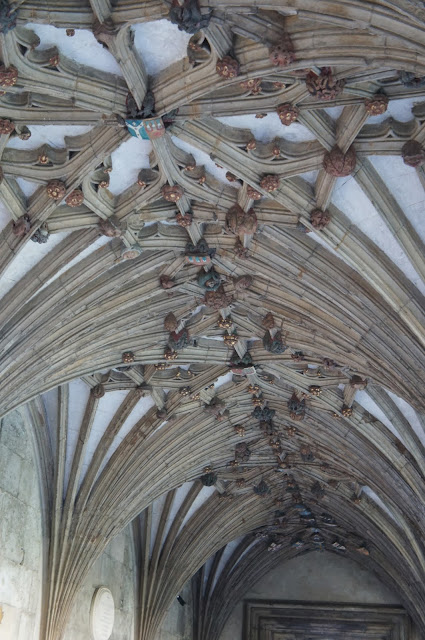 Another interesting fact is that during WW2, the Germans bombed Cantebury as part of a reprisal bombing blitz (the English having bombed Cologne), the Cathedral did not suffer any damage. Astonishing since over 10,000 bombs were dropped in and around the town. That aside, I wasn't really listening to or wanting to explore much here as the migraine was getting worse.  I did find the cloisters which was so serene and cool and that green grass was so inviting. However we were running out of time and as much as I wanted to explore the rest of this area of the town, Red wanted to get a couple of things from the shops. 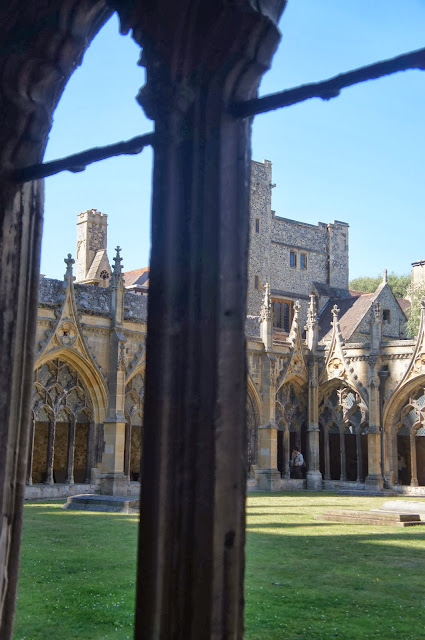 By this time I knew I needed some headache tablets and it turns out Red had some in his backpack and although I expected them to take effect rather quickly, they didn't make me feel better at all and in fact I became more and more unwell.  He had to prepare some "sick bags" for me out of a couple of shopping bags. Since they have holes in the bottom to prevent suffocation, he had to tie some knots in them. By the time we got off the bus at the last stop, Greenwich, I really wanted my bed and didn't know how I was going to get there without the embarrassing act of throwing up in public.  That's right folks, it happened.  Once on the pavement in Greenwich, once on the ferry heading back into London (knew that was going to be a challenge) and finally, I thought I was well enough to get onto the underground at Embankment but once those doors closed, I knew it was a bad idea.  Fortunately, it is not very far to the next station, Charing Cross, and I motioned to Red that I had to get off here and find a bathroom. The bathroom was just too far and if I thought I had nothing left in my stomach, then I was wrong.  An empty commuter tunnel underground had to do. Red was wonderful. Gently patting me on the back and telling me I will feel better soon. Patiently waiting for me to find a bathroom and get cleaned up. I did feel better after that and EVENTUALLY we got back to the hotel but I tell you, I have never felt so happy to see a bed that wasn't my own.

That was our trip to Leeds Castle, Dover and Cantebury.  Started fantastic but did not end so well.