There was something I really wanted to find while I was in London. When walking down Oxford Street a couple of weeks previously, I saw someone wearing a t-shirt that I thought Ted would love. It said "Keep Calm, the doctor is here" referring of course to Dr Who. The best place to find anything like this is Camden Street Market. Red had plans with someone he had met on his tour so off I went for my own little adventure. 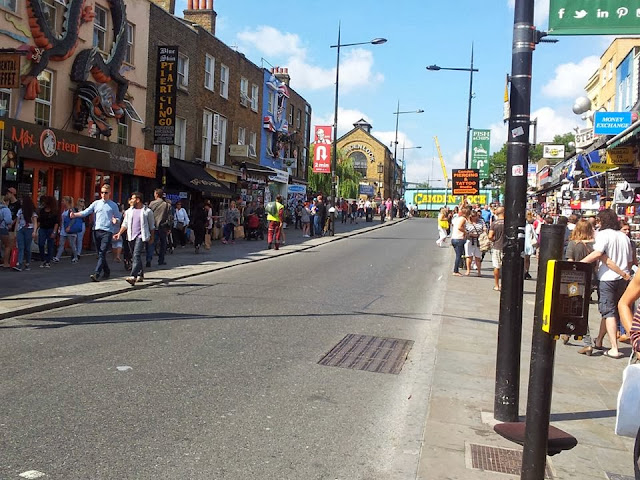 This is the High street in Camden and it is crowded with little shops. No high street M&S here but you can buy anything from out there goth, punk or burlesque clothes to hemp lollipops and down at the end where you see the green/yellow sign that says Camden Lock are the most amazing markets ever.

The largest part of the markets is called the Stable Market and it was originally stables for the horses that once upon a time pulled barges up and down the Regent Canal, that runs alongside. One of the charming features of this market are the bronze statues of horses that can be found throughout the building among the stalls. 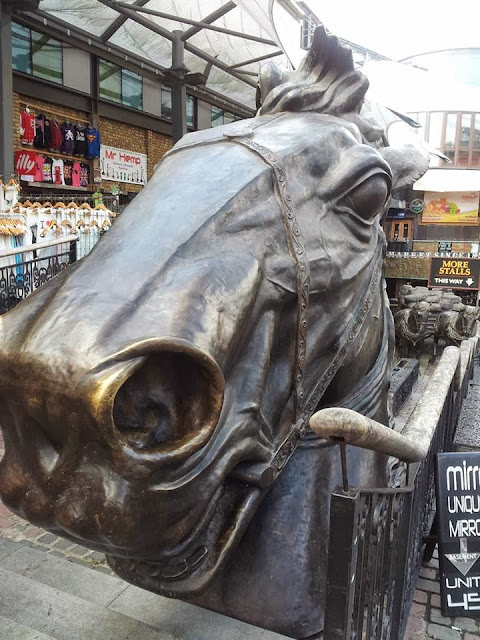 It took me 4 hours of searching and I was just about to give up.  I had asked every t-shirt stall keeper and on my way back to the tube station I decided on one more shop. I was offered help and when I explained what I wanted he directed me to another part of the market that I had been to very early on.and as I was crossing the road, I saw exactly what I wanted. It turned out that when I was there first thing he had not finished hanging out his range of t-shirts. I nearly hugged him and bought a couple more T's that I thought Ted would like.

I didn't bother taking my camera with me to Camden as I thought I was on a focused mission but I am really sorry that I didn't. While I was there I got to watch a couple of barge homes make their way through the lock and came across quite a few interesting sights that would have been fun to photograph. Thank goodness for smart phones. Thats how I took all these photos. 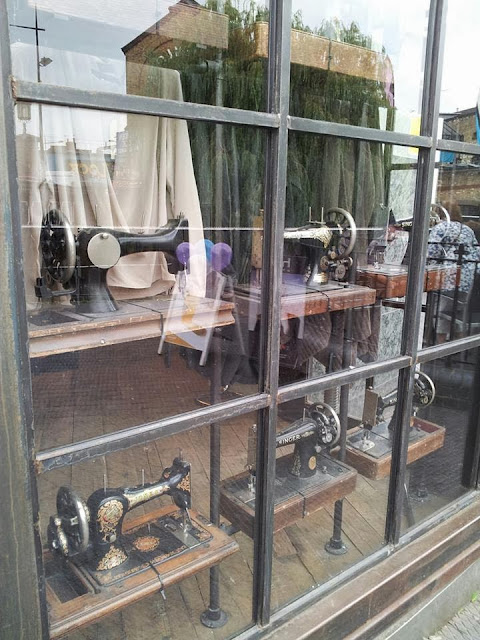 This shop was the only "real" high street clothing shop around and the shop window which is twice the height of a normal window and ran the whole frontage was filled top to bottom, side to side with antique sewing machines.  It was really hard to get a decent photo but try to imagine! WOW!

With my mission complete I headed back to our hotel at Euston Station. Wonder what I could do for the rest of the afternoon.