I can't believe it's weekend again and for me it has been another blissful one. Yesterday (Saturday) I was doing some sewing while hubby was ironing his work shirts and he suddenly asked me if I could go for some Afternoon Tea.

"Are you askng if I would like a cup of tea?" I asked.
"It would be nice with some scones, jam and cream" he answered.
"We don't have any" said I.
"Let's go for a drive up to the top of Mt. Coot-tha and have afternoon tea there." He suggested.

The ironing and the sewing were abandoned and we got in the car for the 20min drive up to Mt. Coot-tha. It was such a beautiful sunny day outside and we enjoyed (in the end) cups of coffee and shared a piece of citrus cheesecake and a piece of choc/hazelnut pear cake. I love it when he is spontaneous like that.

The downside is that even though I remembered to grab my camera as we were leaving, when I tried to take a photo.....oops!....no card present. DRAT!  Oh well, I already have tons of photo's from there.

Then today miss M and I had arranged to meet to go for a browse around the shops and have a coffee. We ended up having pancakes with strawberries, ice-cream and maple syrup too. After picking up some groceries she came home with me and is currently making some make-ahead meals for the week while I finally finished that sewing project. 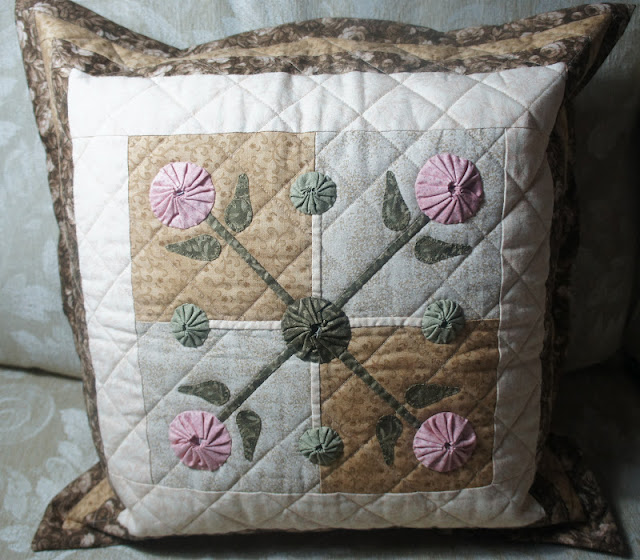 I made the top of this pillow and quilted it back in 2006 but, as usual, couldn't decide how to finish it. Eventually, I made a decision, thanks mainly to the cushion that Sue sent me a couple of weeks ago.

Also featured on Sew its Finished