I belong to a group of quilters and stitchers over in Clayfield, Brisbane. The shop belongs to Kaye and is called Apatchy Quilting. When I first started going there on a Tuesday morning, one of the first to make me feel at home was a woman called Trudy. Trudy was always interested in what you were working on and she herself was always busy with some gorgeous applique or other.

A couple of years ago, Trudy became sick and had to undergo treatment for Cancer. We didn't see her for a bit and then she started joining us again, looking very different with no hair. She found it difficult to stitch having lost the feeling in her fingers but was determined to keep stitching. She participated in the end of year Challenge that Kaye hosts, not just at the end of 2011 but the end of 2012 as well, when she clearly wasn't feeling well.  She won the viewers choice for that and her modesty brought tears to my eyes.  No one could have deserved it more.

Sadly, Trudy passed away a few weeks ago and she may be gone but we will remember her always.  Kaye has organised a charity quilt with proceeds to go to the Blue Nurses who looked after Trudy at home, where she wanted to be. 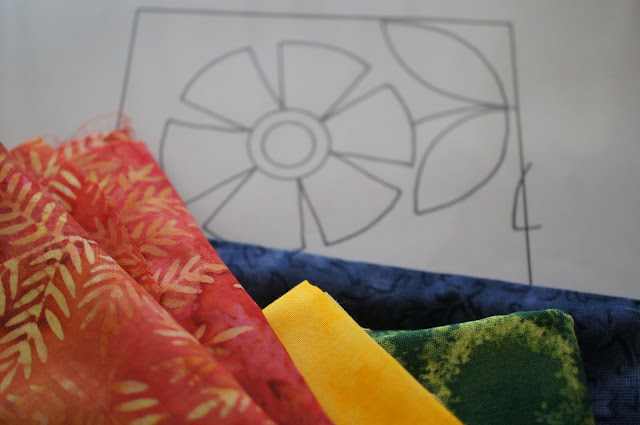 The pattern is a freebie from One Piece at a Time and the colour scheme is in line with the orange/red chosen as Trudy's favourite colours.