A new set of needles

Well, I guess you could be excused for thinking I had disappeared into thin air and I am not promising that this will last but I was thinking the other day about how much I enjoyed blogging even though it is just a venue for me to waffle on about fluff and stuff...so for now I am jumping back on the blogwagon and see if I can keep up with the pace of things.

After a full on start to the year and finishing 5 quilt tops by March, I fell off 'that' bandwagon rather hard....whether it was the colder weather setting in, or the fact that I am STILLwaiting for my house to get built (3 years and counting) or just a general malaise....probably a little of each. Long story short: I haven't had much inclination to sew.

But Knitting.....now that's a whole other ballgame!

I just got this sudden urge to knit....it was an itch that just had to be scratched....Firstly, I tried my hand at knitting a little cardie jacket for my great-niece who just moved to England with her parents. I really enjoyed the pattern but the sleeves were a little tricky so I decided maybe another two little cardies might help me perfect the underarm fiasco.....


Since I haven't touched any knitting needles for almost 30 years, I had a few techniques to conquer so I forgot about the countless other Pinterest finds to knit jumpers and concentrated on something a bit more manageable. Scarves and cowls and blankets.

This was my first big project....a big chunky blanket which I knitted out of some rather awful acrylic stuff in my stash box.  The pattern is lovely and I plan to knit it again in a  nicer yarn sometime soon. The pattern is called the Boulevard Blanket. So easy to knit and the pattern is free*. I discovered circular knitting needles for this project as it is necessary to hold all the stitches needed. 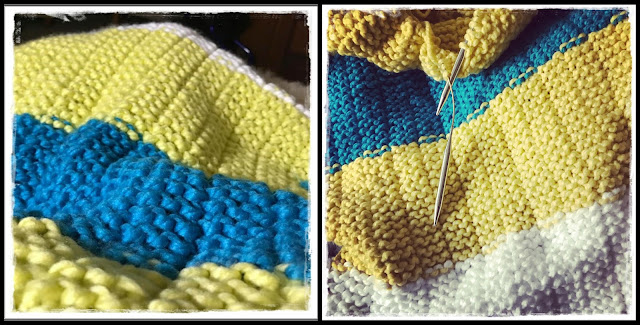 This was a big project so I interspersed it with a couple of smaller projects. A triangular scarf which helped me decipher the M1L and M1R technique of increasing the stitiches. The scarf was knitted with some really cheap acrylic yarn that I picked up in a $2 Shop and it is something I will probably never wear....but it was an interesting learning curve.

Next up was the Potato Chip Scarf and here I picked up on how to do short rows.  There was so much unraveling of this project and starting over but eventually I got the hang of it and produced something  that looked like the picture....I have seen some wonderful examples of this scarf so would like to give it a go in another type of yarn (I originally used a cotton blend) I have a few free* versions of this pattern on my Pinterest Board called Yarn 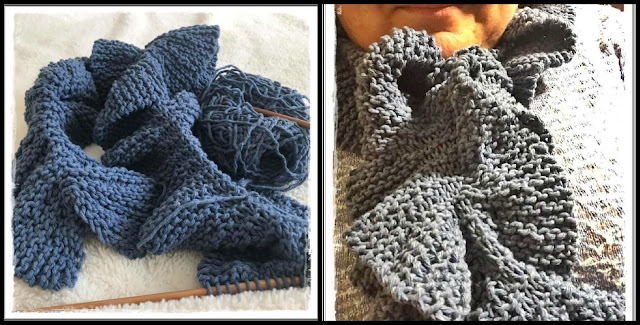 My first cowl was this Ridge and Furrow cowl which is a free* pattern.....I struggled with the circular needles at first as I didn't know how the join the circle....a quick search on Pinterest and I had it all sussed out. I love this cowl and am immensely proud of my efforts.  I realised while knitting this project that I really enjoy knitting patterns. 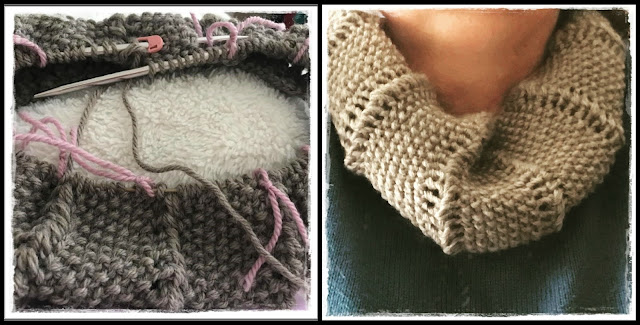 The bug had bitten deep and the next project to meet my needles was this Reversible Rivulet Scarf  a free* pattern from Purl Soho. This project took me several weeks as it was all knitted into the back of the stitch, ie. the reversible part, it took my brain a while to emulate and I also had to polish up on my cable stitch which kept going array forcing me to "unknit" or simply pull the stitches back a few rows.Who knew a scarf could take so long to knit?! That being said, I would do this one again!

That brings me to this current week.....Yes, I still want to knit and if I'm not knitting, I am seeking out patterns on Pinterest. Early this week I decided to unleash the Mohair (well, it's 50% Mohair and 50% Acrylic) and knit an easy lacy scarf. Yikes! Fingering Mohair (blend) is tricky. It kept getting snagged on itself and I ended up having to discard quite a bit of it when the pattern went off course and I couldn't unravel the stitches. My second go was more successful although I can see a big hole somewhere half way up the work. I think I can fix that later. I am actually going to seam the two edges to make a cowl. 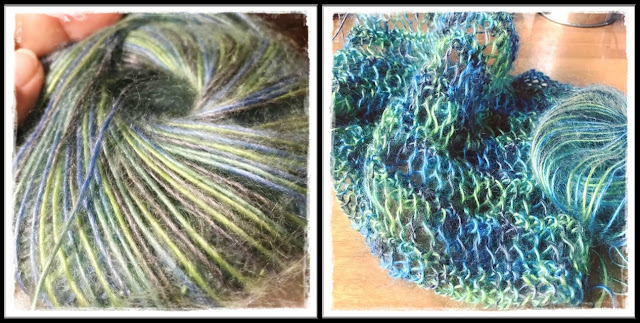 Please note that free* denotes that patterns are free at time of this post  being published.

If you have read this far, then thank you so much for passing by.....and I look forward to journalling my next project.....the only question is:
Will it be knitted, stitched or sewn!