Funny how the best laid plans never come to fruition! I hoped for a week that it would be all smooth sailing. First we had a phone call from Red on his 8hr drive back to work to say he had an accident involving a rather large kangaroo. I think he was quite shocked by the experience and just needed to talk to someone for reassurance and to calm his nerves. He was about 2 hours away from camp and even though the car was still driveable, we waited anxiously for his call to say he was there. The car needs repairs so I am not sure how he is going to get home for his next shift break.

Then on the following day Ted came to visit me and after staying for a couple of hours, he went home to get ready for his shift at work. I had a call to say that his car had overheated on the way home and the engine had seized.  The upshot is that I became mum's taxi again!

The other thing that I forgot to factor into my plans, was Miss M.  She left for Paris on Friday night, so the whole week has been full of last minute planning and a whole bunch of nerves for me.

I did get some stitching done on the farmyard frolics - block called "What a Stud" but that was all I achieved for my one week's holiday. I still have a whole way to go tho'! 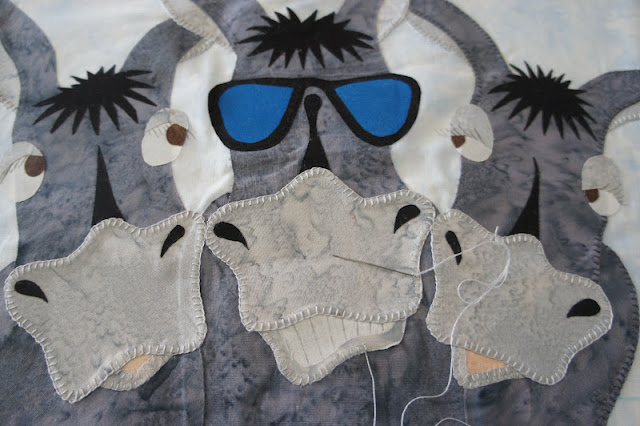