A Change in the Air

I have found it hard to blog lately. I have not enjoyed 2014 for many reasons......my mum is not well, I have had a relapse of health issues (which seem to be on the mend now), kid issues (still a worry but not dire) etc, etc but just lately it feels as if things are turning around a bit (although my mum is worsening a bit) so let me fill you in.

My husbands niece got married last month down in Tasmania which was a lovely, happy occassion to share with two gorgeous people and catch up with our family who all live down south.
After the wedding, hubby and I decided to take the opportunity to spend the rest of the week in Tasmania so we dropped the kids off at the airport for their flight back to Queensland, and we drove down to Hobart. I have only been to Tassie once before and never to Hobart so I was quite excited about being there. It only takes about 2 hours to drive from Launceston to Hobart.....no time at all compared to getting north to south of Queensland (believe me, I have done that before)

At this point I should tell you that hubby and I have had a dream for quite some time now to live on a hobby farm, grow fruit and veggies, have chickens, maybe a horse or two and plant a beautiful garden. Back in 2012, we gave ourselves 4 years to find the ideal place.

With this thought in mind, we drove out to the Huon Valley on the first day for a look around. We travelled to the Marina in Cygnet 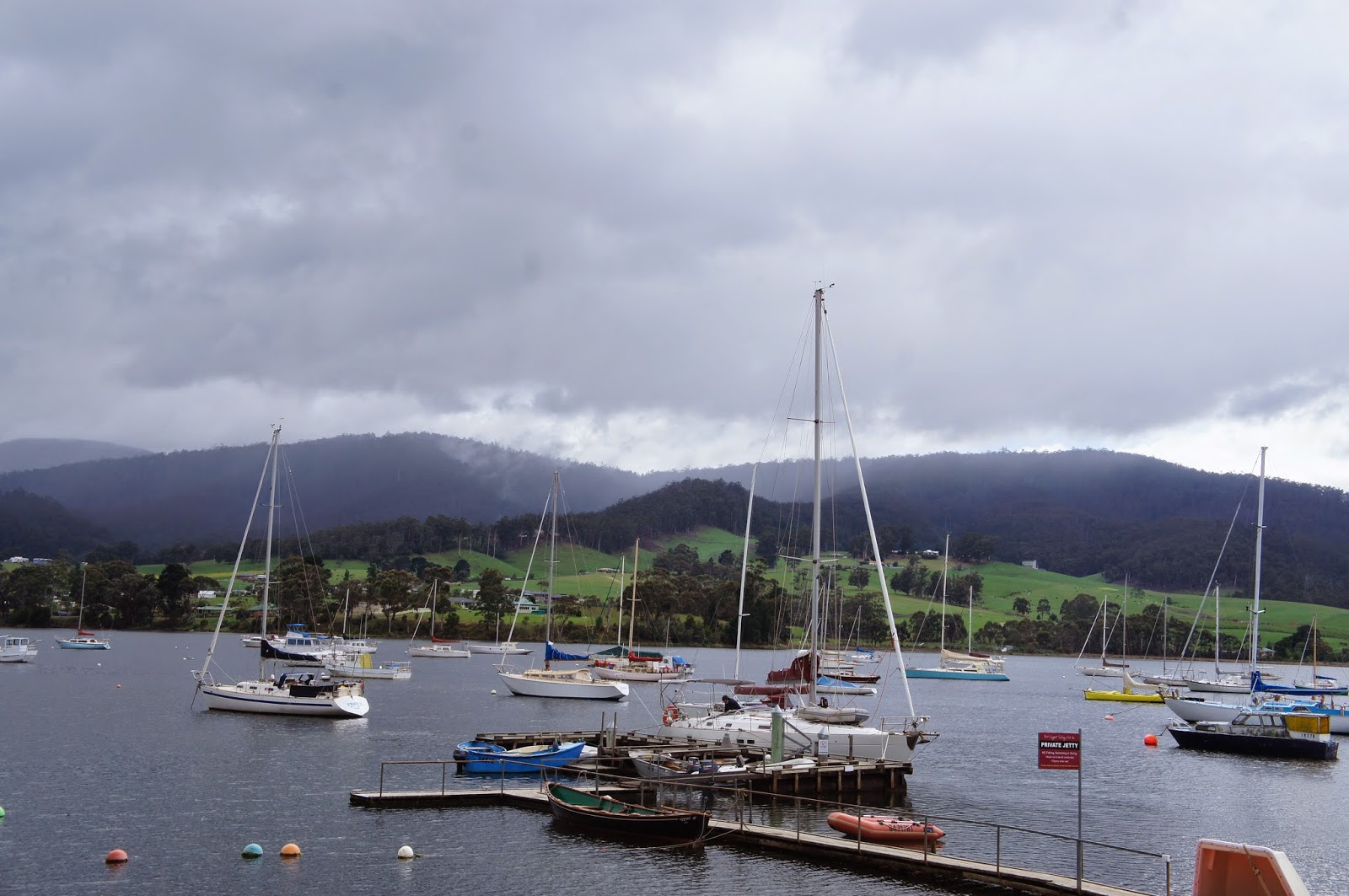 Now my hubby loves a bit of sailing so this ticked one of his boxes.

After Cygnet we travelled back towards Geeveston and spotted a platypus observation walk so parked the car and went for a stroll. I was enthralled by the daisies growing throughout the grass in the park. Now what does this remind me of? Ah yes, very English.......a box ticked for me. 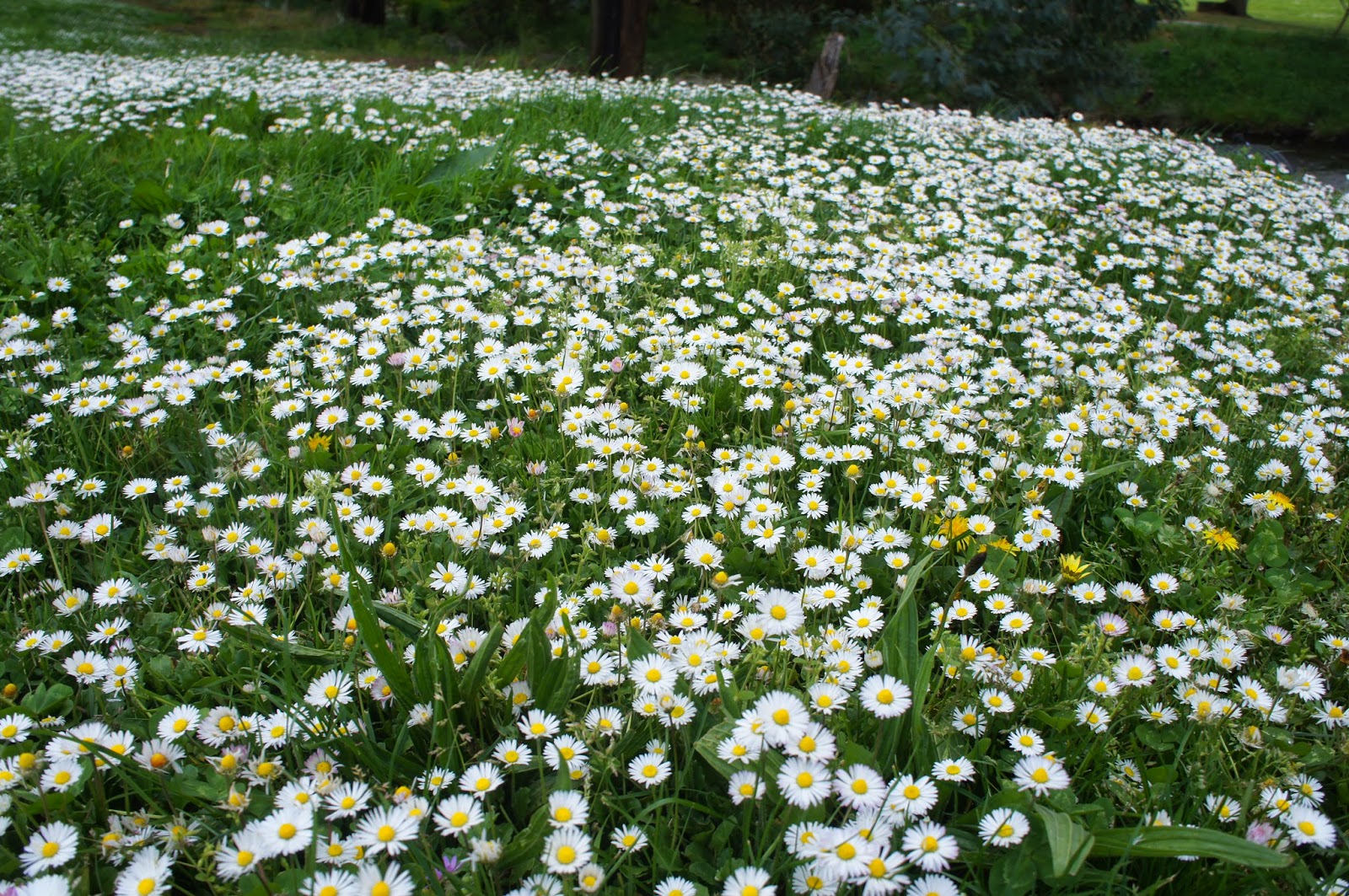 The creek bubbled along next to the footpath and we saw lots and lots of little birds, fairy wrens, finches, black birds and a few others that I forget now. 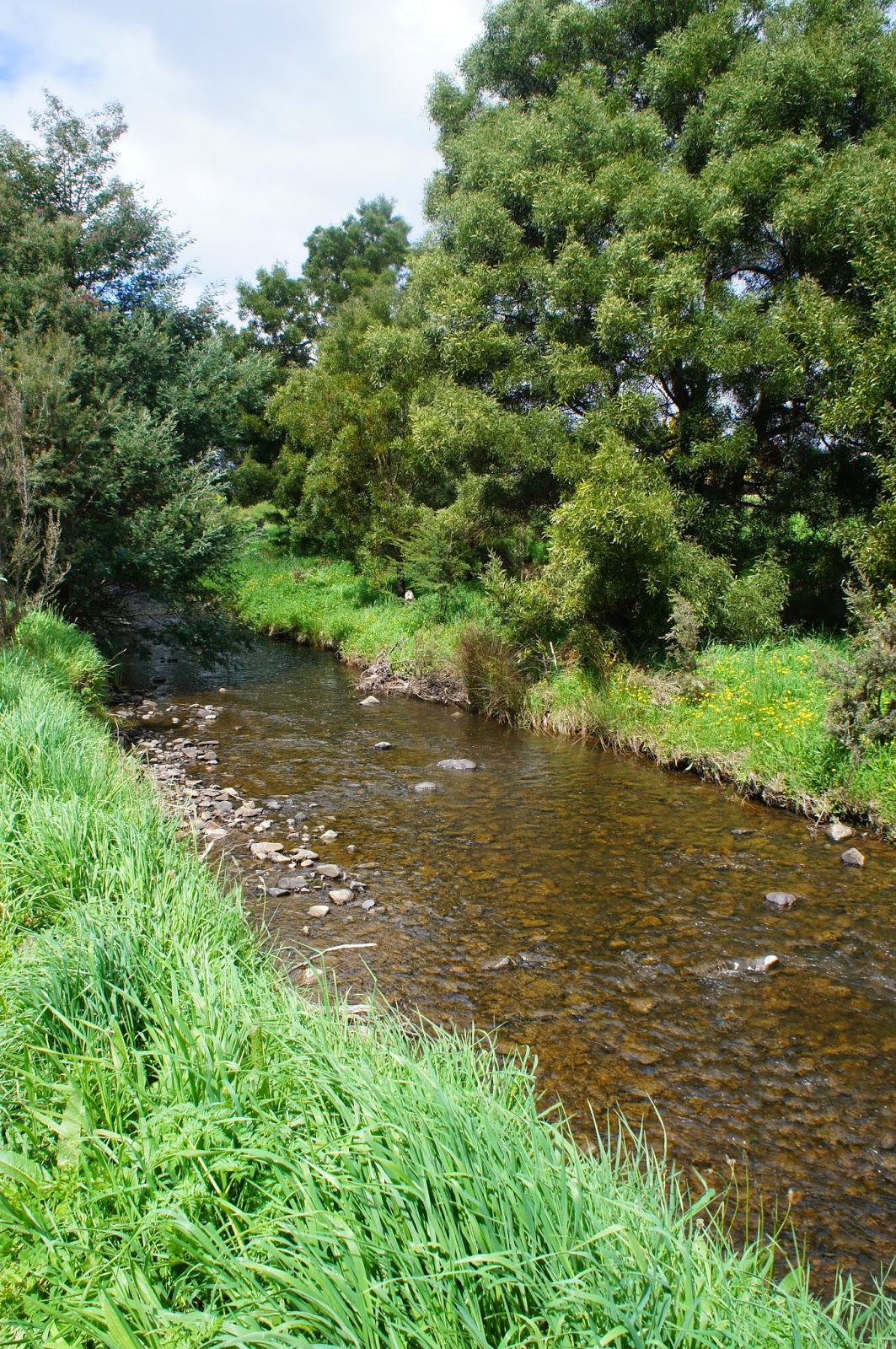 We found the viewing platform but there were no visible platypus on this day. After having lunch in Geeveston, we made our way back towards Huonville stopping to buy a couple of bags of fresh apples along the way.  They don't call it the Apple Isle for nothing! When we got to Huonville, hubby wanted to have a quick glance in the real estate window......? and I wanted to call in at the quilt shop where I bought a few fat 1/4s, then we were off again to visit the Apple Shed Museum where we had a taste of the different ciders sold there, and the honey pot where we could see the insides of a real living bee hive......so mesmerising. We bought a couple of jars of honey and then set of back towards Hobart via Kingston to have a look around. 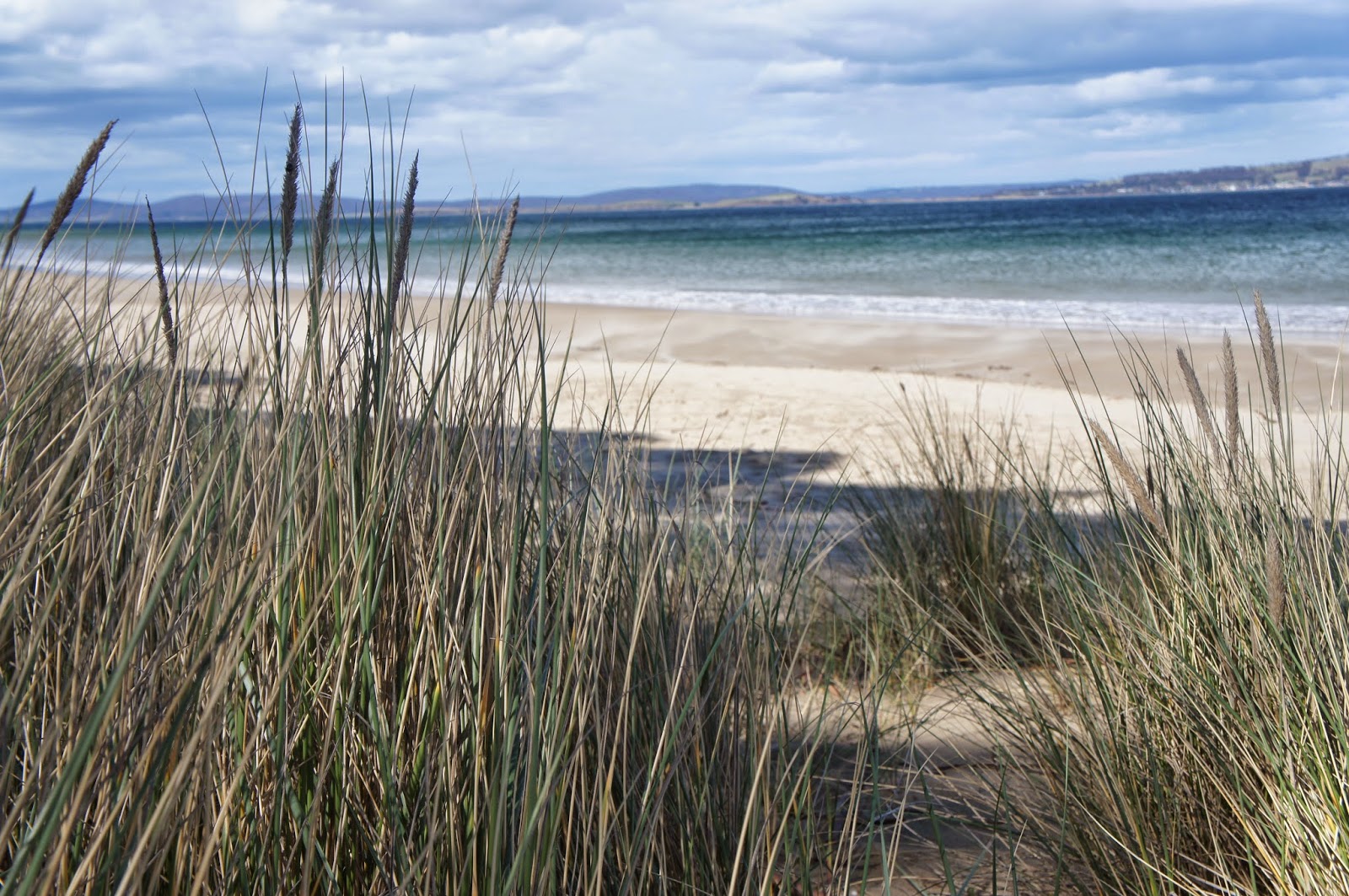 I just loved Kingston Beach, not exactly for those big on surfing but just beautiful all the same. We were actually looking for a quilt shop when we came here so after a quick walk and photo taking we had turned around again to find the shop.  I did find it eventually.  I wasn't my thing as it was all japanese fabric (the traditional indigo kind) and I am not in a mind to use that sort of fabric.  She also had some amazing kimonos in the shop and a few bits of bric-a-brac.  I ended up buying a little hand painted japanese plate.

Now back to Hobart. We decided to head up Mt Wellington (the backdrop to Hobart) before heading back into town. It was starting to look very cloudy while we drove up the mountain but we really wanted to have a look.  Driving up the mountain was interesting and not for the faint hearted.  A couple of times I gasped loudly as another car came around a tight bend a little bit too fast and too close for comfort.  The lower slopes of the mountain are tightly packed with forest growth, and we remarked how difficult it would be to hike through there, but as we got towards the top, the landscape changed to a rocky scene interspersed with small gorse like bushes.

I gasped again as I got out of the car as the temperature had dropped to about 3 degrees celsius......BRRR.....and I was not dressed for it but I was not going to be put off so we headed to one of the lookouts.  By this time everything was covered in a thick cloud and hubby was certain it was starting to snow......but I think it was more like sleet. 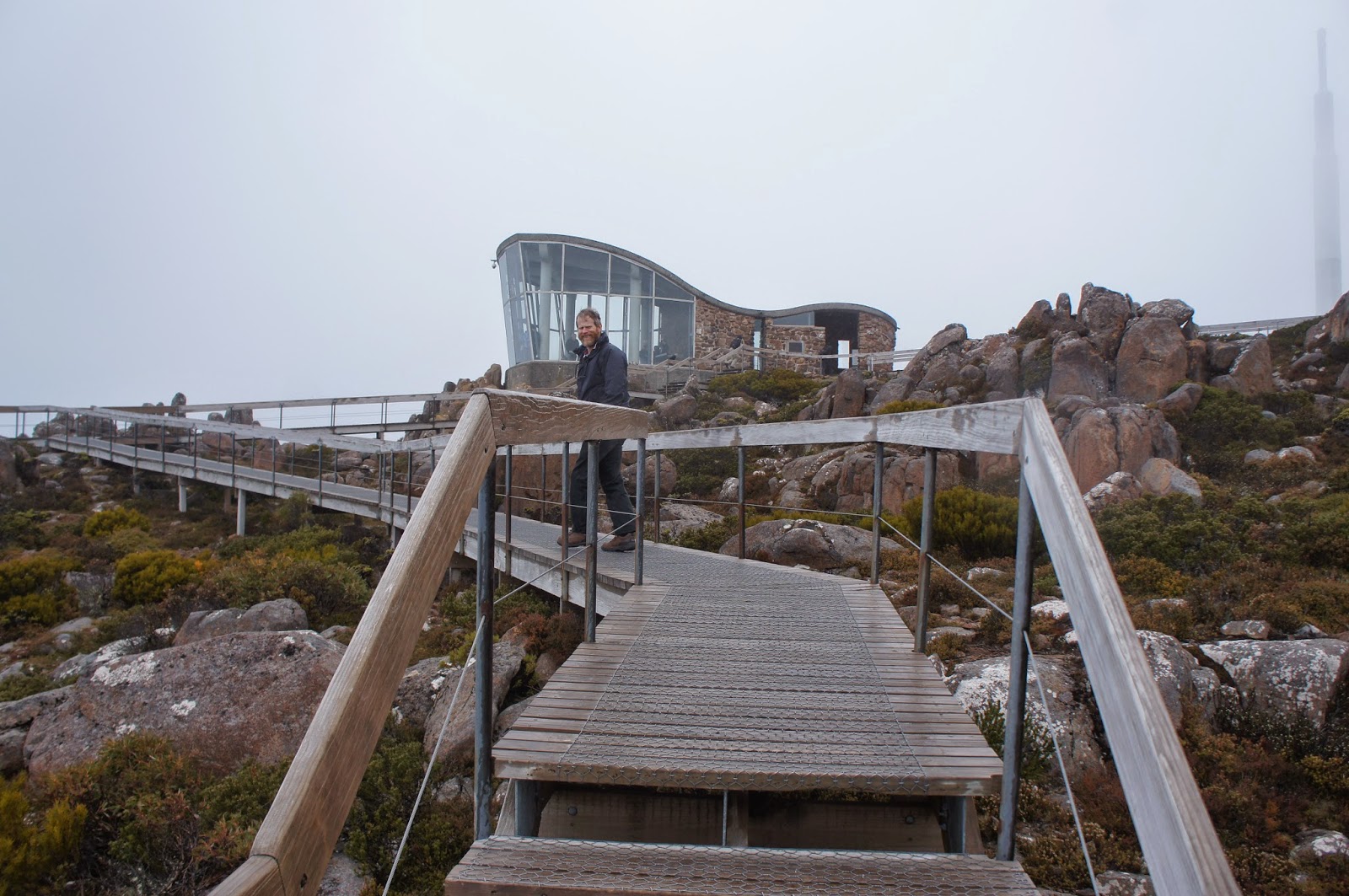 That is my hubby in the photo racing me back to the covered lookout.  Boy! it was cold and it looked doubtful that the cloud and sleet was going to clear away anytime soon.

By the time we got back to that lookout with the large windows, I was soaked but I did see a glimmer of sunshine and even a rainbow so took the opportunity to snap a shot of the view of Hobart nestled there below the mountain. 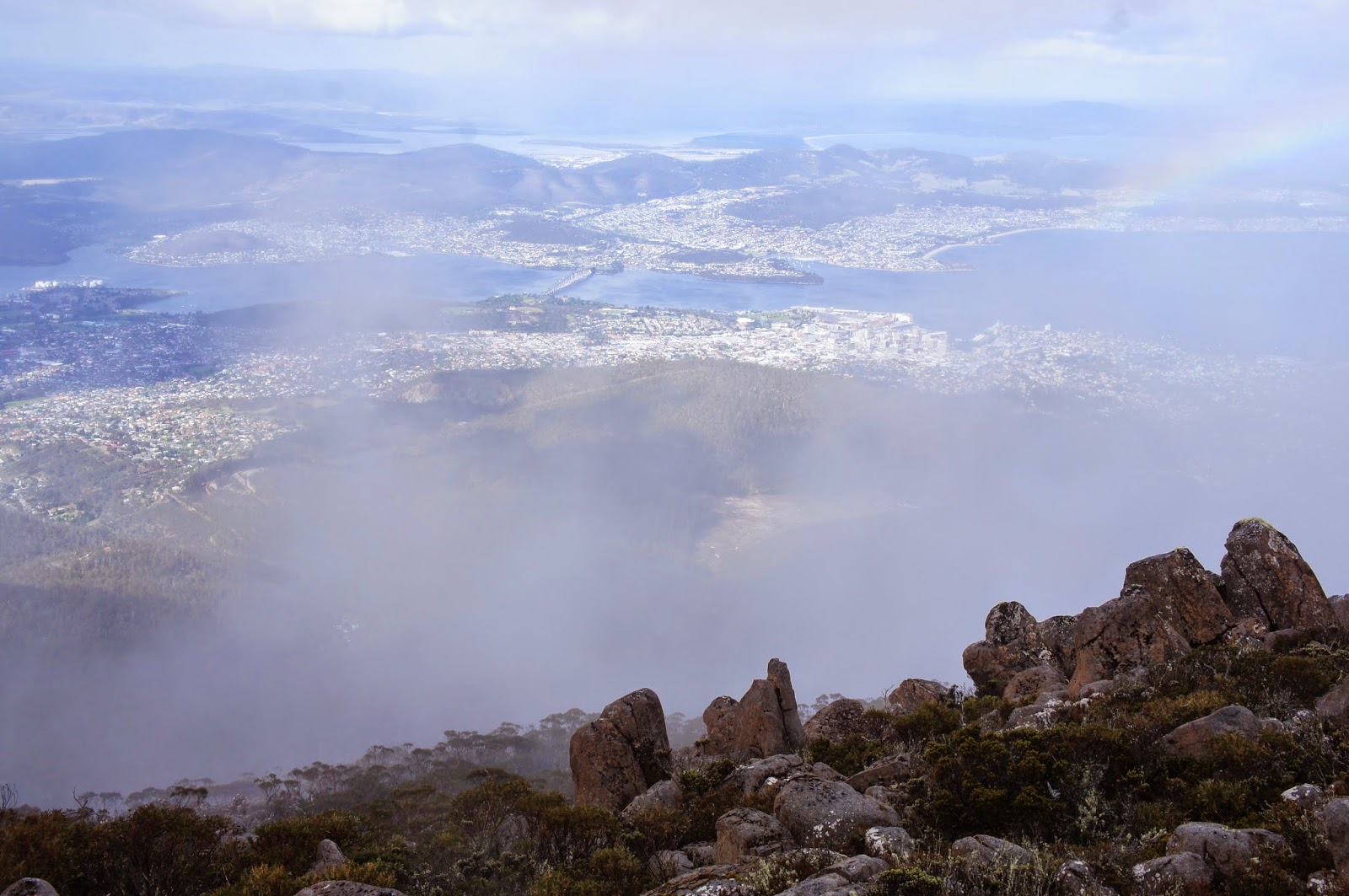 The cloud cover worsened so we headed back to the car, only to be pelted by teeny tiny hailstones. They were as hard as ball-bearings and I felt like I had just gone through a dermabrasion session.

We headed back towards the motel where I climbed into bed with the electric blanket on just to get cosy and warm again while hubby scrolled through real estate sites.......I found that interesting!

The story will continue tomorrow